As I mentioned, I had no idea what I was getting into when I brought Barley/Maria home from the shelter.  The most I knew about border collies, courtesy of a visit to a great aunt's farm over a decade ago, was that they were cute as puppies and were herding dogs.  Common sense would tell someone that a herding dog is energetic, but I don't think anyone can understand the border collie energy until they live with it.  Here's  a little preview:


The first three months were rough.  Barley had extreme separation anxiety combined with her insane energy.  If I was sitting on the couch, she was under my feet.  If I was doing dishes, she was pressed against the backs of my legs.  If I went to bed and left her in her crate, she cried (until I discovered she loves Jewel and started leaving music on for her).  Every time I moved, she moved.  If I needed to get up off the couch for any reason, or even just shifted positions, she got up and paced and needed at least 10 minutes of TLC before she curled back up or played with her toys.  (This was partly good because I turned down a lot of snacks because it took too much energy to start the process over every time I got a craving for something.)  Eventually, she got better--I can now walk from the couch to the kitchen without her getting up (although if I go around the corner into another room, she's usually right behind me).

Once we dealt with the separation anxiety, we still had to learn to deal with the energy.  A border collie is not a good grading partner.  A border collie does not like to lounge on sunny days and read a book.  A border collie does like to herd things, especially a handsome white cat.  At first, Barley's herding instincts were helpful.  Soth had started scratching my newly reupholstered dining room chairs; Barley quickly learned that when I said, "Soth! No!" her brother was in trouble.  Before I could get off the couch to get Soth, Barley would run to the chair he was on and give him the border collie stare.  This may not seem that intimidating, but come over for dinner some night and you'll be quaking in your boots when she tries it out on you.  Of course, when Barley gave Soth the stare, Soth would run.  When Soth would run, Barley would chase.  When Barley started chasing, she would run big figure eights: around the couch/coffee table, around the dining room table, repeat, repeat, and repeat again.  Soth and I spent a lot of time cowering on the couch until she finished herding Soth to where she wanted him to be: the back of the couch.
As I mentioned, I got Barley to ring in the new year.  And, as I also mentioned, I don't do snow--I spent 22 years in the southeast growing up and I can count on one hand the number of times I saw snow during that time.  So, even though I walked Barley twice a day, they were short walks.  Our long walk was 25 minutes, so I'd never really seen Barley tired.

Finally, it warmed up to about 60 degrees--a temperature I was more than happy to welcome after my first winter in the snowbelt--and I took Barley for an hour-long walk on the rail trails near our house.  She came home and slept the rest of the day.  This is how we discovered hiking.

Recently, I ordered Doggin' Cleveland to help us discover more places to adventure.  We'd already tried a couple of the trails of the trails in the book and had passed several more in the car, but the book outlines 50 awesome adventures to go on with your dog.  The Holden Arboretum has always been a favorite of ours--we have a membership so we can go any time we want! 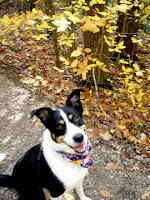 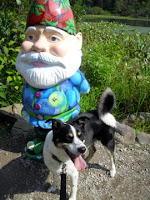 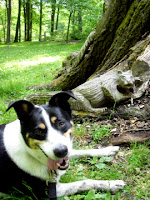 Recently, we discovered the Lakeshore Reservation, which is perfectly shady, and has an awesome beach where Barley can chase the waves. 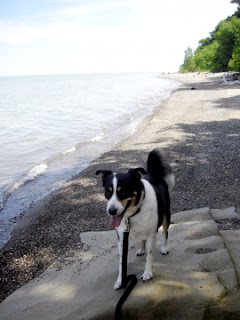 Today, we discovered the Chapin Forset Reservation, courtesy of Doggin' Cleveland.  We loved it!  The book didn't tell us about the multiple parking lots, so I wasn't sure where we should park to get to the Lucky Stone Loop Trail that was recommended.  Luckily, the park isn't huge and there were trail maps available in the first parking lot we came to.  First, we did the one-mile Quarry Loop because we were right there and it looked shady.  (Fun Fact: Joseph Smith was a foreman in the quarry and extracted stones to build the Kirtland Temple that's down the street from the park.  My mom should be proud that we're getting history lessons on our hikes!)  We also ventured into the woods a bit on a more natural trail just to get a better view.
Then I was determined to find the Lucky Stone Loop Trail, but the connecting trail was another .8 miles and it was hot enough I wasn't sure Bar could handle walking .8 miles to the trail, doing the whole 1.5-mile loop, and doing another .8 back to the car, so we drove down to the correct parking lot and what a treat the Lucky Stone Loop Trail was!  The Chapin Ledges along the trail were impressive and made for gorgeous scenery.
When we got to the other side of the loop, there was a scenic overlook that Doggin' Cleveland had labeled the best overlook in NE Ohio because on clear days you can see downtown Cleveland.  We could see lots of stuff in the distance! 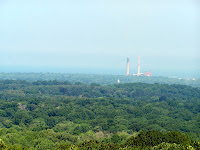 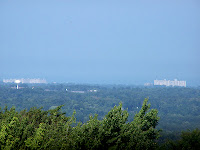 After two hours of hiking, we decided it was time to head home.  Now, several hours later, I still have a tired Barley dog.  Can't wait to try out the other hikes in the book!