Emily Dickinson perfectly described the world Barley and I saw at the Arboretum today.  The hills were definitely undressed.  But it was sunny and 50 degrees, so we were not missing a chance to romp in the woods--even if they didn't have the vibrant colors we had gotten used to over the last few months.  Even though everything looked dead, there was still a beauty about the woods today.  Usually, you can't see anything too far off the trail, but today you could see really far into the woods since there weren't all of the leaves and the shade was gone.  (And since the leaves and shade were gone, we had a really nice warm walk without having to pile on a billion layers.  Yay.)  We saw all kinds of birds, including a woodpecker and a blue jay, so the woods weren't totally devoid of colors. 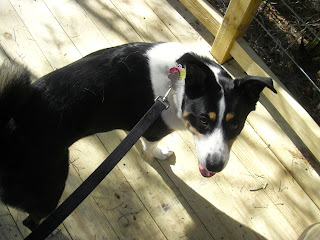 We stopped by the new Meditation Point on our walk.  Barley wasn't very sure about it at first.  When things are different, she notices.  And she's been to the Arboretum enough that she knows how it's "supposed" to be.  When she saw the start of the boardwalk off of the trail, she stopped in the middle of the trail and stared at it.  It took a little bribing with beef and potato jerky to get her to keep going.  Once we got on the board walk, she pretty much sniffed every board and nail and then it wasn't so bad.  Meditation Point was nice today, but I think it will be excellent in the spring/summer when the leaves are back on the trees.  A boardwalk takes you a little ways off the trail and ends at an overlook with a few benches (and according to the Leaves magazine I got this weekend, they are going to plant some more native plants around the benches to make it even prettier in the spring).  Right now, you can see the benches through the trees, but once the leaves are back it will be totally secluded and peaceful.  Even without the seclusion, though, there was something very peaceful about it.  For some reason (even though we hadn't seen a single other person in the woods), I felt like I had to whisper to Barley while we walked down the board walk.  It's probably good that we didn't see other people--they would have probably thought I was like Brick on The Middle.
The weather's been perfect the last two weekends, so it's made up for the gross cold weather we've had during the week.  It doesn't make me feel quite as guilty about taking a short neighborhood walk after work every day when we can go on awesome hikes at the end of the week.
Last weekend, we were at my parents house and we broke out Barley's new birthday present (even though her birthday isn't until December 9!).

Barley and my parents sweet dog, Maz, got to play with the tunnel several times throughout the weekend.  They both loved it!  At first, Maz wasn't sure exactly what the tunnel was for--and even laid down in the middle--but after a few minutes she was excitedly awaiting her turn to run through.

We can't wait until next week when my sister's dog will be there, too, and we can have all three dogs playing in the tunnel!