According to my Honey Badger Calendar, yesterday was Feral Cat Day.
So, it seems like an appropriate time for an update on my darling cat. As you know, my sweet boy has had some struggles with his FLUTD.

Lately, though, he's been doing great.  A few months ago, we started Operation Litter Box. I bought 2 additional litter boxes and a couple different kinds of litter. I put the boxes in the places he liked to pee most. (I finally gave in and figured it was better to have litter boxes on my carpet than to have to regularly clean up pee.) Soth hated the pine litter I bought, so that one was out.  But he loves the recycled paper litter.  He's been using his litter box regularly--a few times he's gone to pee in the bathtub and then thought better of it and ran out to one of his new litter boxes instead. The only time he still pees on things is if I have junk mail piled up waiting to be sorted. Maybe he does have a sense of humor.

Soth has also become king of the castle.  Not that he wasn't ruling this place before, but now he has the tower to prove it.

A about a month and a half ago, he developed a fascination with my closet shelves. He's always had access to the closet because the doors slide and he can open them on his own. So it's just easier to keep the door open for him all the time. But then he discovered that there was a whole new world on top of my shelves where I couldn't reach him. Also, he was being dangerous in his attempts to get up there.

He'd stand on the back of a ROCKING chair and leap for the shelf. I'd try to keep him from jumping, but as soon as I'd leave the bedroom or go to sleep, he'd leap. Sometimes he'd make it easily. Other times, he'd just get the shelf with his front paws, hit the hangers with his back, and scramble to stay on the shelf. A couple times he fell. 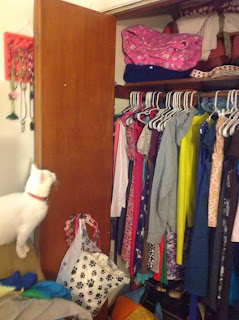 So I tried the cheap method of dealing with him. I pushed the chair up against the closed closet doors so that he couldn't pull them open and get on the shelf. He would still paw at the doors. And every time I wanted clothes or shoes, I had to move the chair. Adding extra steps to my morning getting ready routine is never ideal. So, I moved his cat tower from the living room into the bedroom. 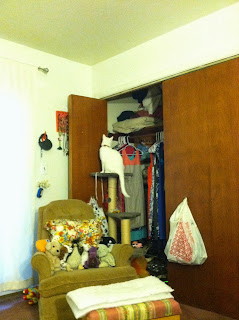 This worked better for us. I could get to the closet more easily and made his leap to the shelf a little safer.  But it still wasn't ideal. He missed the shelf a couple times.

So, the King got a brand new tower that is taller than I am and allows him to step from the top tier of the tower to the shelf. 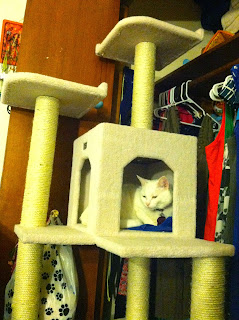 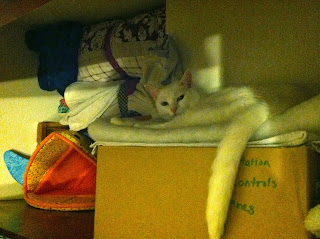 You may notice that in the first few pictures, there were a lot of blankets on this shelf. Somebody decided he didn't like them there and he pushed them off the shelf. I haven't found a good place to store them, and until I do, they've taken over my chair. And my shelf has turned into a cat kingdom. His purr pad is on top of the box, his fish bed is in the cubby, and he's happy as a lark.

In addition to turning into the king of the closet, my bunny cat has proven his skills as a ninja assassin. Yesterday, I had slept really well and sweet Soth came and curled up on my tummy a few minutes before the alarm went off and purred and purred. I was so happy that he was being snuggly on a cold morning. For a brief moment, I thought it was strange that he had been good enough to not get shut out of the bedroom in the middle of the night and then the alarm went off, I pressed snooze, and I closed my eyes for another few minutes.

Then I turned on the lights when the alarm went off again. I noticed something on the carpet. It looked like a fur ball. But it's a strange amount of fluff for Barley to have shed at this time of year when she should be bulking up for the winter. I put on my glasses and quickly realized it was a mouse!

My little cat had killed a mouse.

I hate mice. I used to love them when they were cute and sang about the streets of America being paved with cheese and being under the same pale moonlight as their lost relatives. Then a mouse came into my dorm room in college and it stole a piece of my chocolate. Mice became my nemeses. I didn't see another mouse until I lived in New Mexico where mice carry the plague.

To me, mice are worse that roaches. (I grew up in the south, so roaches are a normal part of every day life.) Mice are germy, dirty little vermin.

I also don't deal with dead things. I skipped the burial for my first dog. I never saw one of my parakeets when they were dead (thank you, Mom!). I have never personally flushed a fish down the toilet. I had no idea how to deal with this dead mouse. I ended up getting my little garden trowel and flipping the mouse into a box, so I could get it to the dumpster without seeing it or having to touch it. But the mouse was lighter than I thought and when I first tried to flip it into the box, it flew across the room and landed in another spot of the carpet. I screamed. (Sorry, neighbors.) Eventually, I got it into the box and into the dumpster.

But I was terrified the rest of the day. I had to put on music to go to sleep so that I wouldn't think I was hearing mouse noises. I had to steam clean my bedroom carpet to get rid of dead mouse germs. This weekend I will be pulling every single thing out of my pantry to make sure that there's no mouse-nibbled boxes.

I'm baffled at how this could have happened. Every night, he wakes me up knocking things around.  Every night, I wake up and shut him out of the bedroom. When he plays with his toys, he demolishes them. (He's rougher on toys that Barley is!) He bites them, sinks his front claws in, and kicks with his back legs until his toys are shredded. I NEVER heard him knocking this mouse around. There was a clean kill--no blood, no guts, just a dead mouse. This has me convinced that he's a ninja. (Or he's been watching too much Revenge with me.)

I was certain this kill was his way of celebrating Feral Cat Day. I'm not 100% sure what his life was like in the year before we found each other, but I know it was rougher than it is now. He was underweight and had little chunks out of his ear. (I used to tell my grandma this happened because he got violent when he drank cheap beer and started a bar fight.) So, I know he's not a "real" feral cat since he lets me pet him (and sometimes enjoys it), he sleeps on my feet, and he enjoys sitting next to me on the couch, but I also know that he is not the most domesticated cat I've ever met, either. This mouse incident proved to me that he actually has some survival instincts (and I'm so glad that he thinks his cat food is more delish than mouse carcass).

Most of the time I question his survival skills. I'm not really sure how he survived without me. He tends to get stuck a lot. When I leave out paper shopping bags for him, I have to cut off the handles or he gets his head stuck in them (your science teachers were not lying when they told you that animals would get stuck in those plastic 6-pack things and plastic bags). He has gotten stuck behind my television before.
This morning, it was a bra that was his downfall. I had just gotten out of the shower and wrapped my hair up in the towel and I was getting ready to put in my contacts. Soth was rubbing on everything in the bathroom and purring away, thinking that he would be more likely to get breakfast sooner if he was cute. All of the sudden he started to flail. I thought there might be a mouse in the bathroom. As soon as I got my contacts in, I realized that he was stuck in the strap of a bra that I had hanging off the laundry hamper and he had just flopped onto the floor to wait for me to rescue him.

So while I know that he could have fed himself on the streets,  I'm not sure how he lived on the streets without getting himself into some sticky situation. He needs me just as much as I need him. So, happy belated feral cat day, my boy! I love you more than rainbows.

Email ThisBlogThis!Share to TwitterShare to FacebookShare to Pinterest
Labels: cats