I had planned for my next post to be about the different teaching methods we've encountered the past 6 months as we've bounced from class to class and worked with multiple different trainers, and about the wonderful things that have been happening in the last 12 weeks we've been with our current trainer, and about how all of this has been making me reevaluate my own teaching strategies with human students in a more difficult class I have this semester. I just hadn't had the time to get all these ideas down yet.

Then the perfect storm occurred in our agility class this week, so instead (in my best Usher voice) these are my confessions.

I failed my dog this week.

I didn't listen to my gut and I let someone who doesn't know my dog well tell me how to handle her and I failed my dog.

In our last two 6-week sessions, Barley has been incredible. She's been focused. She's had drive (especially when doing 2x2 practice--I can't wait until we put it all together into actual weaving). She's had fun in school. So, as Barley's become more relaxed in class, my anxiety levels have gone down.

The new 6-week session started this week. Our regular trainer had to miss class, so we had a sub (who has worked with Barley before and knew about her past issues). We had three new dogs in class (two Barley knows from our previous class and they're both lovely dogs, but one is terrified of Barley's energy, so he is frantic the entire time they're in the same room, and the other one is really energetic himself). One of our regular classmates had a different handler (her dad came instead of her mom). So there were new people, new dogs, new energy.

When I saw how many new dogs were in the class, I got a little anxious--even though I like the dogs and their owners very much, they were part of the classes where Barley's anxiety started to go through the roof. So, I was a little on edge.

As we waited for class to start, we did some doggie pushups and we practiced some heeling. Bar was focused and with me, so I figured she was ready to work.

The trainer told us all to pick a jump and get warmed up (not something we normally do in class--our warm ups take the form of various games that work on skills). For a second, I thought to myself, I probably shouldn't take Barley off leash when everyone else is on the floor.  But then I figured that she'd done so well the last 3 months that she would be ok. I also figured the trainer would have suggested a different activity for us (like she'd done when she'd subbed in the past) if she thought it was a problem. So, I took the leash off and sent Barley over a jump. She came right back to me. I relaxed a little. Then I sent her over the jump again. At the same time, one of our regular classmates went over another jump. Barley saw her move and chased her down, grabbed her by the scruff, and pinned her against the wall. The other dog hadn't even looked at Barley, but Barley was so stressed from the new things happening in class that her prey drive kicked in and she went after the first thing she saw moving. She didn't want to hurt the other dog (if she had wanted to, she would have); she just wanted to tell her that things don't move unless Barley says its ok, but when Barley does these things she snarls and growls and sounds significantly worse than what's actually happening.

As soon as I grabbed her collar, she let go and made the "Oh, I wasn't supposed to do that" face. We went and sat in the corner of the crate room while the trainer checked out our poor, unsuspecting classmate. Barley was good the rest of class--she wasn't as relaxed as usual, but we all cleared the floor when another dog was working, and Barley never even glanced at the other dogs (even the one she'd pounced on), not even when one of the new dogs stepped on her tail.

It was a heartbreaking night. We'd made so much progress in the last two sessions. She was enjoying class again. And because I didn't stand up for my dog, I jeopardized that progress.

Two separate trainers--our first ever trainer aka Barley's guardian angel and our current trainer--both called the next day. I was worried that we were going to be asked not to come back to class.  But they were both calling to see if we were ok. They wanted to be sure that Barley wasn't too stressed out and that I wasn't upset.

Barley's guardian angel and I talked for a long time and she said that she had planned to come to class that night (usually she brings one of her dogs and is a regular classmate), but her dog had had dental work done at the vet that day, so she decided to stay home and snuggle with him because she knew Barley had done so well.  Our current trainer said she never would have expected that kind of behavior from Barley because she's done so well in the time she's known her, so she didn't even think to give the sub extra warnings about our class dynamics.  So, we all came to the conclusion that this is a lesson in how important it is to remain vigilant and not let our guards down even when things are going well. Our current trainer said she's turning this into a teachable moment for the entire class because we have something really special where "dogs like Barley can come to heal" and she wants everyone to understand that with the number of extra stimuli in class this week, this situation could have happened with anyone's dog--neither trainer thinks Barley is a dangerous dog, and they are both standing up for my girl. I feel especially lucky to have such wonderful people in our lives--I would never have learned to like my pup (despite the fact that I fell in love with her on day 1) without people like them to teach me how to do that!

I saw a quote on the Dogs in Need of Space Pintrest page that said "When something goes wrong in your life, just yell 'Plot twist!' and move on." So, that's what we're trying to do between now and our next class.  (I'm also planning on trying out the pumpkin peanut butter dog treats between now and class, too, so I can bring a peace offering to the entire class.)

The day after our incident, we got in an excellent 5-mile walk at the lake that was complete with sunshine and 60-degree weather (in the words of Emily Dickinson, it was a blue and gold mistake--and a mistake that I am 100% thankful for). My pup seems no worse for the wear and she's been just as responsive as ever on walks the rest of the week.

Today we went for another walk at the lake, but only 3 miles because we were dealing with 50-degree weather and 26-mile per hour winds, so it was a tough walk this morning.
My pup was working so hard to keep her ears from flapping in the wind and I couldn't help but laugh at the way her fur looked in the wind. 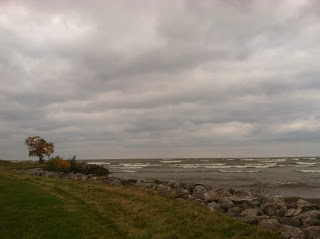 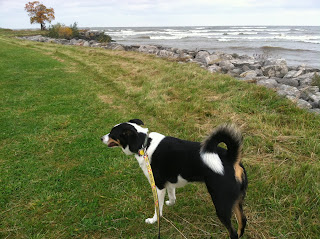 After stopping along the lake and watching the waves crash and the long grasses dancing in the wind, I feel better. I failed my dog and it probably won't be the last time, but I know that I'll never make this particular mistake again, so it is time to move on and try to be better.

Hope everyone had a happy Halloween! I ate plenty of candy (I've had 2 trick-or-treaters in the 4 Halloweens I've been here, but I still feel obligated to buy a bag of candy--just in case) and the pets rocked their matching Halloween bandanas. I couldn't get a good individual picture of either one, so instead we have their "happy" faces in our family photo! 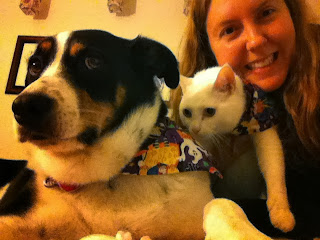 Between Bunny's ninja mouse killing skills (he got a second one last weekend!) and Barley's reactivity, I think they're scary enough without actual costumes, right?
Posted by Beth at 10:03 PM 1 comment: