Walkin' in a Winter Wonderland

Snow should be in my DNA. My dad grew up in PA and my mom spent most of her childhood years in CO, so loving snow should come naturally to me. But spending the first 11 years of my life on an island off the coast of southern GA seems to have tampered with my wiring in that regard.

Snow and I were never friends.

When I was little--maybe 6--it snowed one winter. Since we never ever got cold weather, I didn't have snow boots. I had to wear plastic grocery bags over my shoes to play outside. Even at a young age, I found that humiliating. Snow and I got off on the wrong foot.

Then it snowed my freshman year of college.  17 inches. I didn't own a coat. My roommate and I didn't leave our dorm room for two days and survived on Campbell's soup out of the microwave. When my friends and I finally decided to venture out and get winter weather wear, we didn't have ice scrapers for our car and used sticks to try to clear the snow off our cars.

Then one day, my view on snow changed.  I brought Barley home in January, but there was no snow on the ground. It took a few weeks before I found out that I had brought a snow-loving monster into my home.

When the flakes did start to fall, I realized that my dog loves snow. She rolls in it. She buries her face in it like an ostrich. She bounds through the drifts. She'd stay out in the snow all day if I'd let her.

While snow still isn't my favorite kind of weather, I do love to see my dog having fun in the snow. I no longer hide from it and I even go out into the snow to play with my pup.

In our almost three years together, we have spent a lot of time visiting the Holden Arboretum, but we'd never seen it in the snow before. I don't go out in serious snow unless I have to--mostly because since I never got taught how to drive in the snow, Carrie Underwood has me convinced that the second a snowflake hits the air, I need to break out with "Jesus Take the Wheel"--so every time it's snowed, I've opted to not go to the arboretum, and by the time the next weekend's rolled around, the snow has always been melted.

It snowed a little last night, and the weather was good today, so I decided we needed a pre-finals grading adventure. My girl loved it even more than she usually does (and she loves the arboretum a lot). 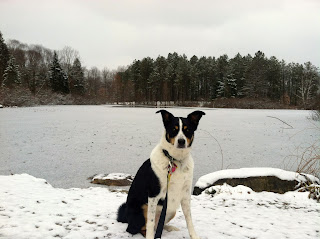 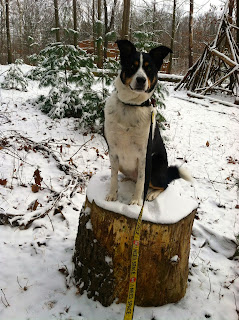 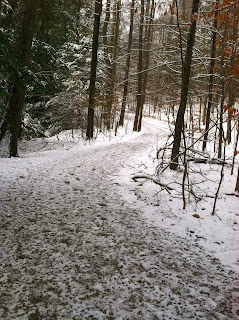 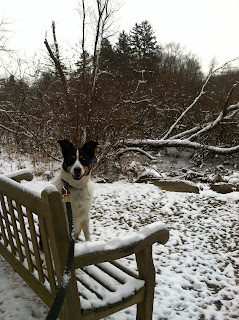 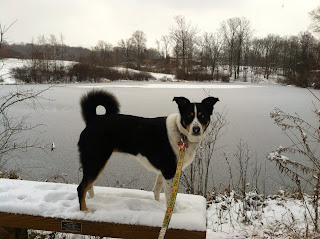 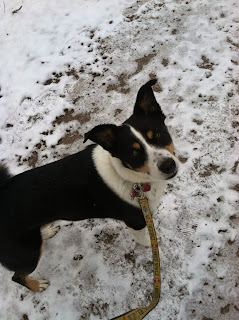 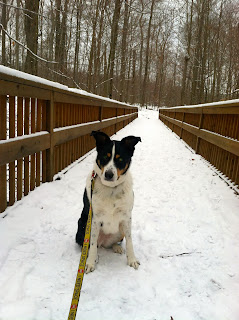 We took our time strolling through the woods and watching the black squirrels play. The trails weren't covered in a thick layer of snow, so it wasn't a tough walk. In fact, it was perfect. It was the crunchy kind of snow that makes awesome noise when you walk.

We also saw a hawk of some sort. I only saw a quick glimpse of it through the trees, but it talked to us for a while (and I was glad Barley was big enough to not be taken away by it because as much as I love the scene with the eagle from The Proposal I really didn't want to throw my phone at a bird to get my dog back). Barley was very intrigued by the conversation the bird was having. 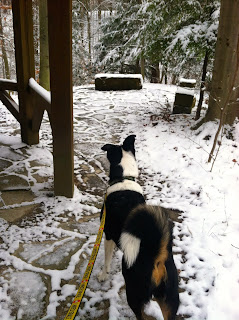 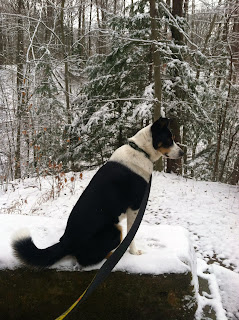 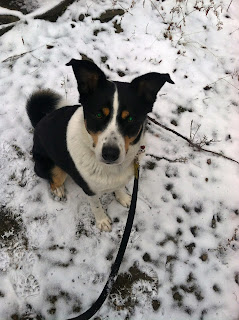 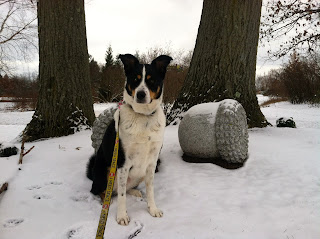 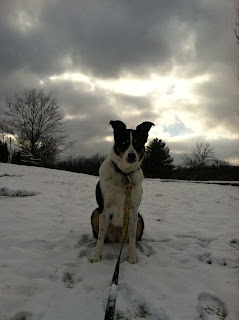 When we got back to the car after our 3-mile stroll, my car let us know just how cold it was outside! So I decided it was a good excuse to use the $1-off Starbucks coupon I had for a peppermint mocha to warm up.

The arboretum was just as wonderful in the cold and snow as it is in the spring, summer, and fall. Hope everyone else is enjoying the cold as much as we did today!
Posted by Beth at 8:51 PM 3 comments:

Sometimes, I forget that my dog is not as big and brave as she'd like the world to think she is. She's calmed down so much since I brought her home that I forget that the first year of our life together she was never relaxed. When I got up, she got up. She would be on edge for 30 minutes before she could curl back up and rest. I would avoid getting up for drinks, snacks, or even to go to the bathroom just to avoid starting the process all over again.

For the last couple years, she's been a happy-go-lucky pup. When we adventure, she wags her tail (and not in the anxious way) the whole time. When we are at home, she goes off on her own and snuggles in a bed, curls up on the love seat, or plays with her toys.

So, when I decided to pack of the pets for a 12-hour Thanksgiving road trip, I thought Barley would embrace it.

We left after our agility class and drove halfway there. We didn't get to the hotel until 2 a.m. and I thought my girl would settle down and go right to sleep.  After all, she had been excellent the entire 6 hours in the car and when it's bedtime at home, she hops up on the bed and doesn't move until morning.

Instead, I got this.
She refused to lie down. She just jumped on and off the bed for almost an hour.

Then she stretched out on the bed and stared at her reflection in the mirror.

Soth is a seasoned traveler--he flew from NM to Pittsburgh our first Christmas together and during the return trip we missed our connecting flight and had to stay in a hotel; he traveled with me when we moved from NM to OH--he travels well and doesn't even need sedatives for long car trips.  He loved every second of being in the hotel. Our room had a window seat that looked out over the parking lot and he hopped up behind the curtains and stayed there almost all night. He didn't even eat all of his dinner because he was so busy watching. 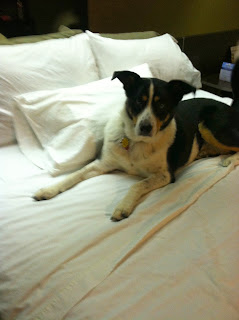 Finally, Barley settled in for the night and I fell asleep around 3. Unfortunately, around 6, people started opening their doors and making noise in the hallway--which I wouldn't have noticed, but Barley noticed and every time a door slammed shut, she hopped off the bed and ran to the door and growled. It was not a restful night and I probably would have gotten just as much rest if I had kept driving through the night. 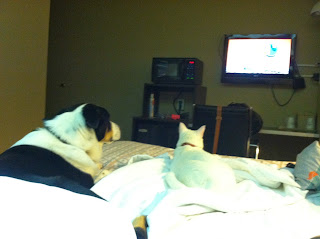 When I finally gave up on sleeping and got up to get ready, Barley and Soth settled in to watch Good Morning America. Too bad I couldn't have put it on for them earlier.

I guess I shouldn't have been surprised she was nervous.  After all, she's been spending most her life living in a gangsta's paradise. (Ok, not really--we just heard the song on the radio tonight, so I had to work it in.) She's been with me for 3 of 4 years of life, so clearly it hasn't been her whole life.  But whatever happened in that first year of her life taught her that the world is a scary place that she has to react to in order to survive.

We got on the road to get to my parents' house to make it to town in time for mystery beers at a pizza place with my dad.

Barley was equally anxious at my parents' new house. She loved seeing my family and their dog (and didn't try to eat their cat), but she was not sure where her place was. She paced and wandered from room to room. She didn't relax until we got her crate out and put her bed in it; then she curled up to rest.

We did get to explore some new trails, and Barley was her usually happy self then.


After a couple days, Barley settled down more. There was something in the new house for everyone.  The upstairs hallway overlooks the family room, so Barley could watch through the railings and keep an eye on her "flock" from up above.

Their house is full of windows from top to bottom, which was perfect for Soth. There's a big, plush carpet that patches of sun streamed through all day long.  He also enjoyed perching on the back of the piano and watching the squirrels. One day, a squirrel ran along the outside window sill and drove him crazy! 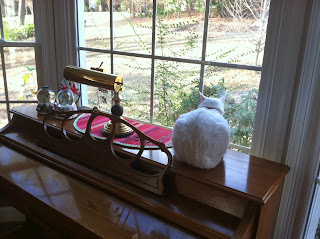 Barley's favorite part was their fenced-in dog run. Since Barley can't go to dog parks with other dogs and we don't have a fenced in yard, she never gets to just run outside. She always has to be on a leash. When we took her out into the dog run, she ran laps around and around the yard. Then we played with a ball. 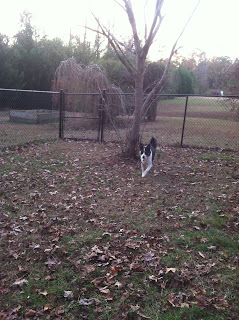 She moved so much that almost all of our playtime pictures were blurry. 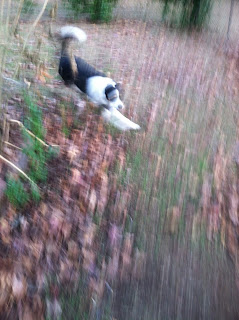 For me, there was good beer. Dad took us to a local brewery where he befriended the staff while he was living the bachelor life before the old house was packed up and Mom joined him in town. We celebrated my baby brother's birthday there. 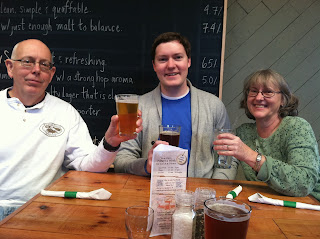 We made it home after another two long days of car time, but my pup did a better job during her second night in the hotel. She still spent a lot of time bouncing on and off the bed when we got in, but once I turned out the lights, she curled up beside me and slept through the night.

Overall, it was a great visit with the family, even if it was far more car time than I care to have again any time soon. It was also a much needed reminder of just how much my girl still needs me to help her navigate the world even though she's made immense progress in our time together.

We've got some big dates coming up in the near future--on the 9th Barley turns 4! Then one month from today we'll celebrate our 3-year anniversary together. I can't believe it's only been 3 years.  It seems like a lifetime.

Hope everyone is enjoying the holiday season and enjoyed as much good Thanksgiving food as I did!
Posted by Beth at 11:50 PM 3 comments: