This morning, I woke up early to take my Barley girl on an adventure. Normally in the summer, we stick pretty close to home because it seems silly to waste time in the car when we could be just walking near home in the cooler hours of the day. We've had such gorgeous weather since we got back from Georgia and Alabama (only a day or two where it's gotten out of the 70s and several days in the 60s) that I thought we should do something different.

Recently, I learned that Niagara Falls State Park is only 2 hours and 45 minutes from us. I've always wanted to go to Niagara Falls. My mom says I went to the falls when I was little--still in the backpack--but I don't remember that, so it doesn't count. After a little research, I saw that dogs were allowed in the park, so when I saw that the high for today was 75 it seemed like as good a time as any to go.

Barley doesn't handle heat well, so I decided we should get an early start so we could be done and on the way home by lunch time. I set the alarm for 5:30 and we were on the road by 6:45. Barley kept trying to go back to bed, but as soon as we were in the car she was awake and ready to see where we ended up.

We got to the park around 9:30 and it was not what I expected.

I've spent a lot of time at state parks, so I thought that maybe it would not necessarily have natural trails, but that there would be an effort to compliment the natural beauty.  The website said there were a couple gorge trails--a one hour and a two hour hike--that we were planning to try out.
At first, it looked promising. Beautiful blue skies, view of a nice trail along the Niagara River, and lots and lots of green.

Then we got into the construction their doing. Even though there was free parking along the trail by the river, I couldn't figure out how to get there, so we went to the first official State Park parking lot and got a nice view of this monstrosity.
The whole park was far more touristing than I'd anticipated. There were gift shops and sidewalk tables with t-shirts all over the place. There was an ice cream shop (The Twist of the Mist or something cutesy like that) shaped like an ice cream cone. Quite honestly, many of the buildings were  tacky and distracted from how pretty the river was.

The construction made it difficult to navigate the park. Plus, there were a lot of people and I'm not really a huge crowd person (but not really any other dogs, so that's a plus), which also made it difficult to figure out what direction we should go. We couldn't figure out how to get to the falls, even though our parking lot said it was the closest parking lot to the falls.

There were several signs that pointed us in the direction of hiking, but they all took us to dead ends--or to the middle of the city where there were no more signs. We saw the trail we had passed in the car, so we decided to at least walk on that for a little while. The trail went along the upper rapids and had some nice views of the river. 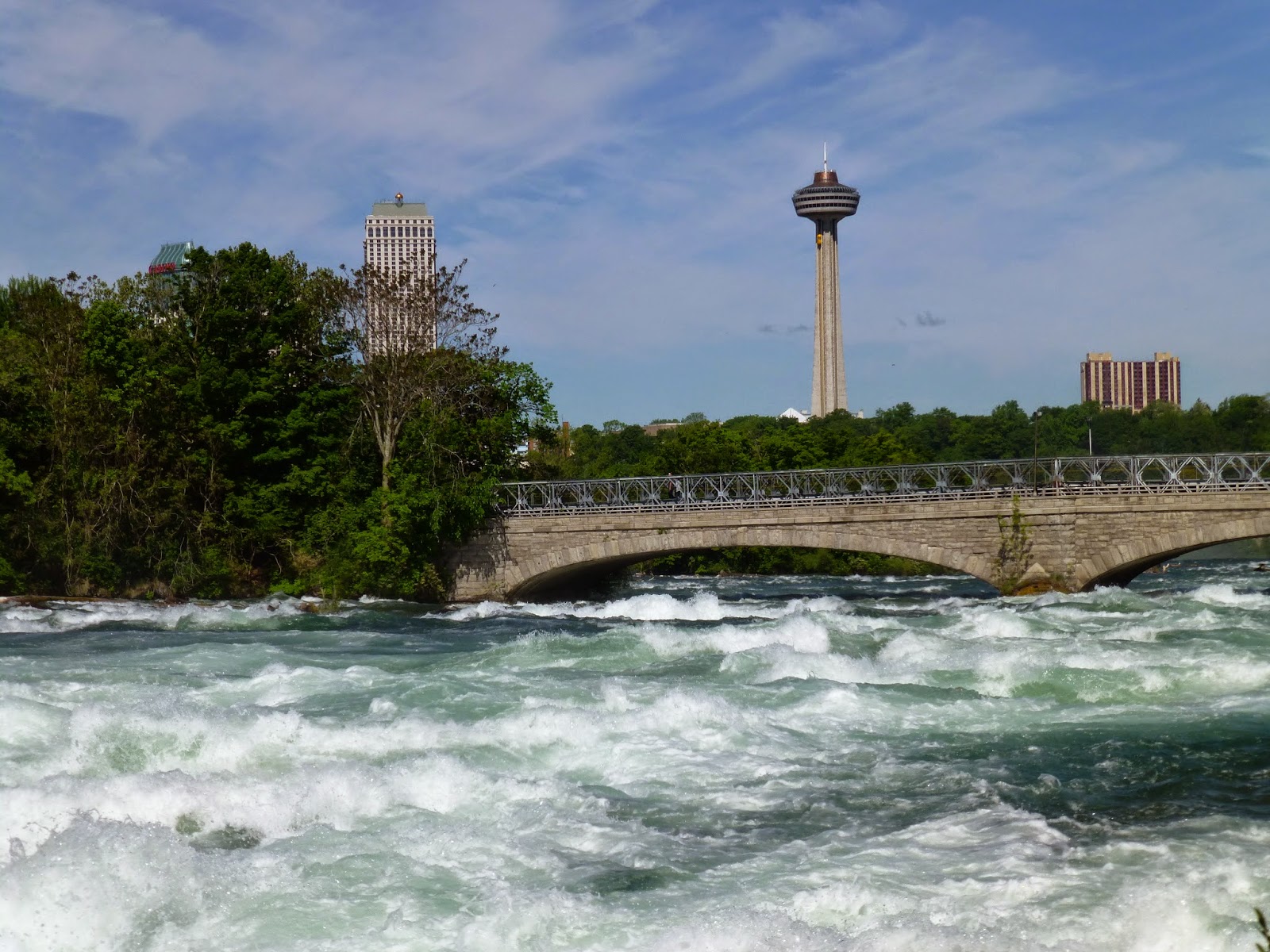 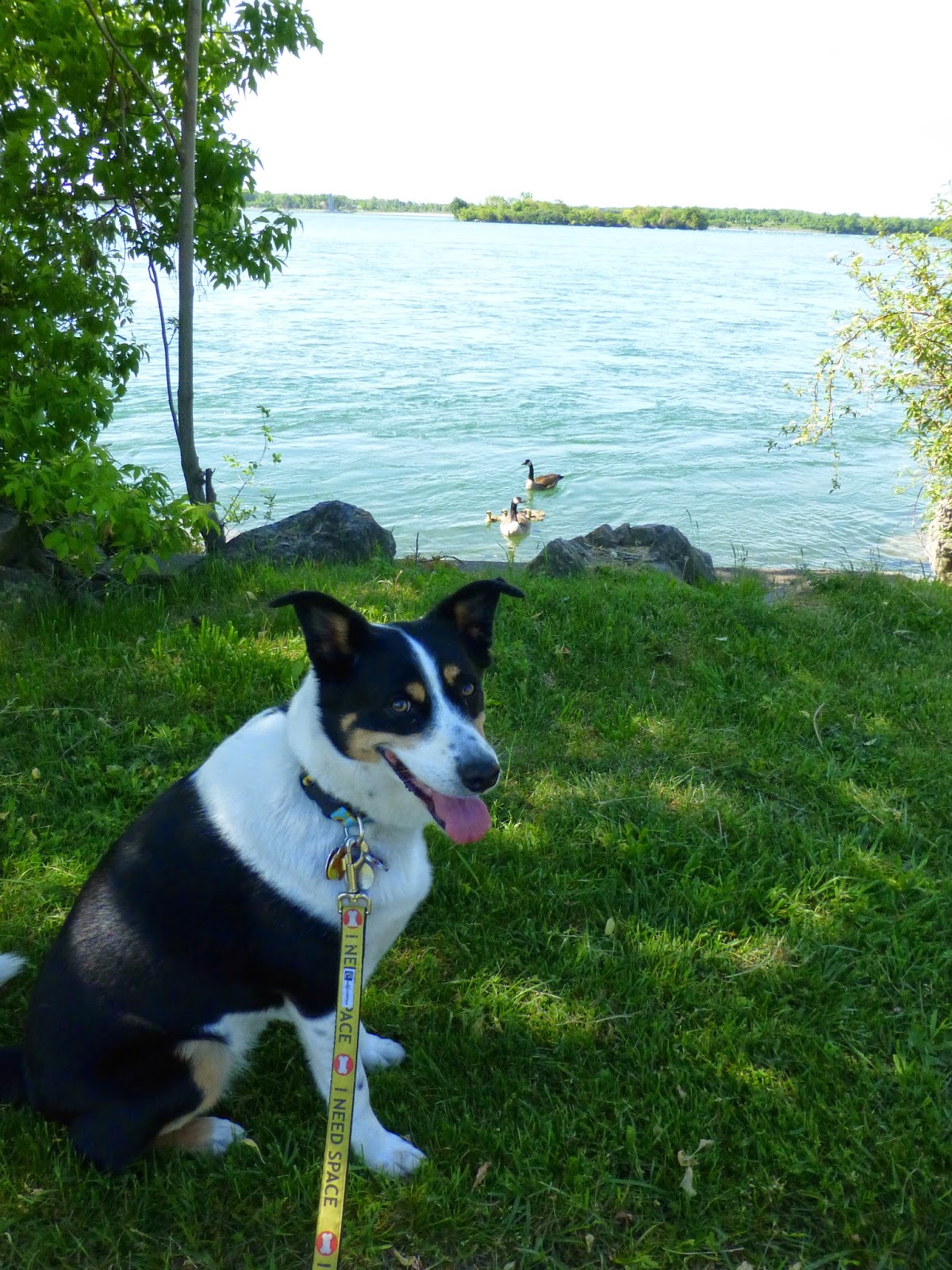 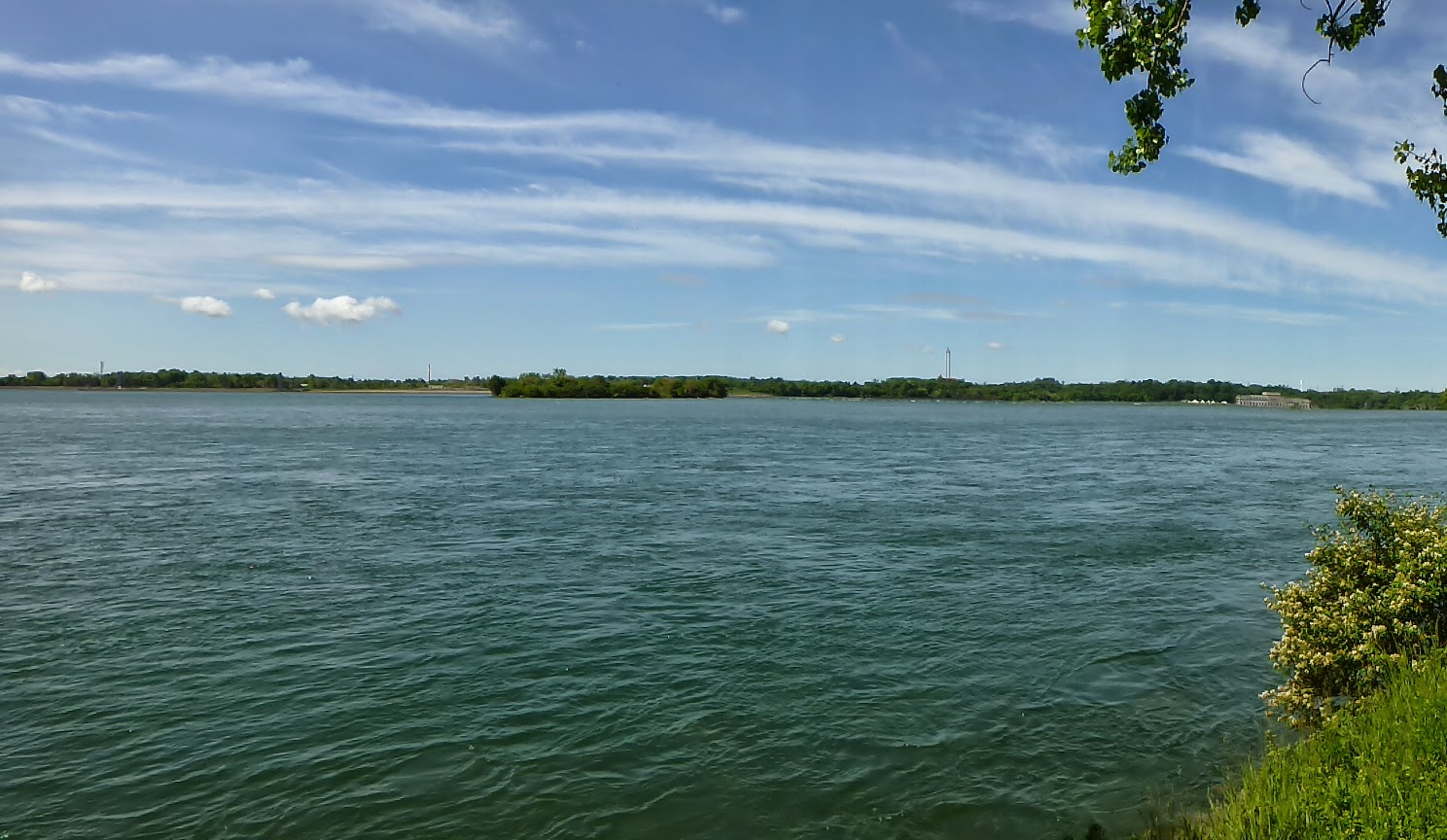 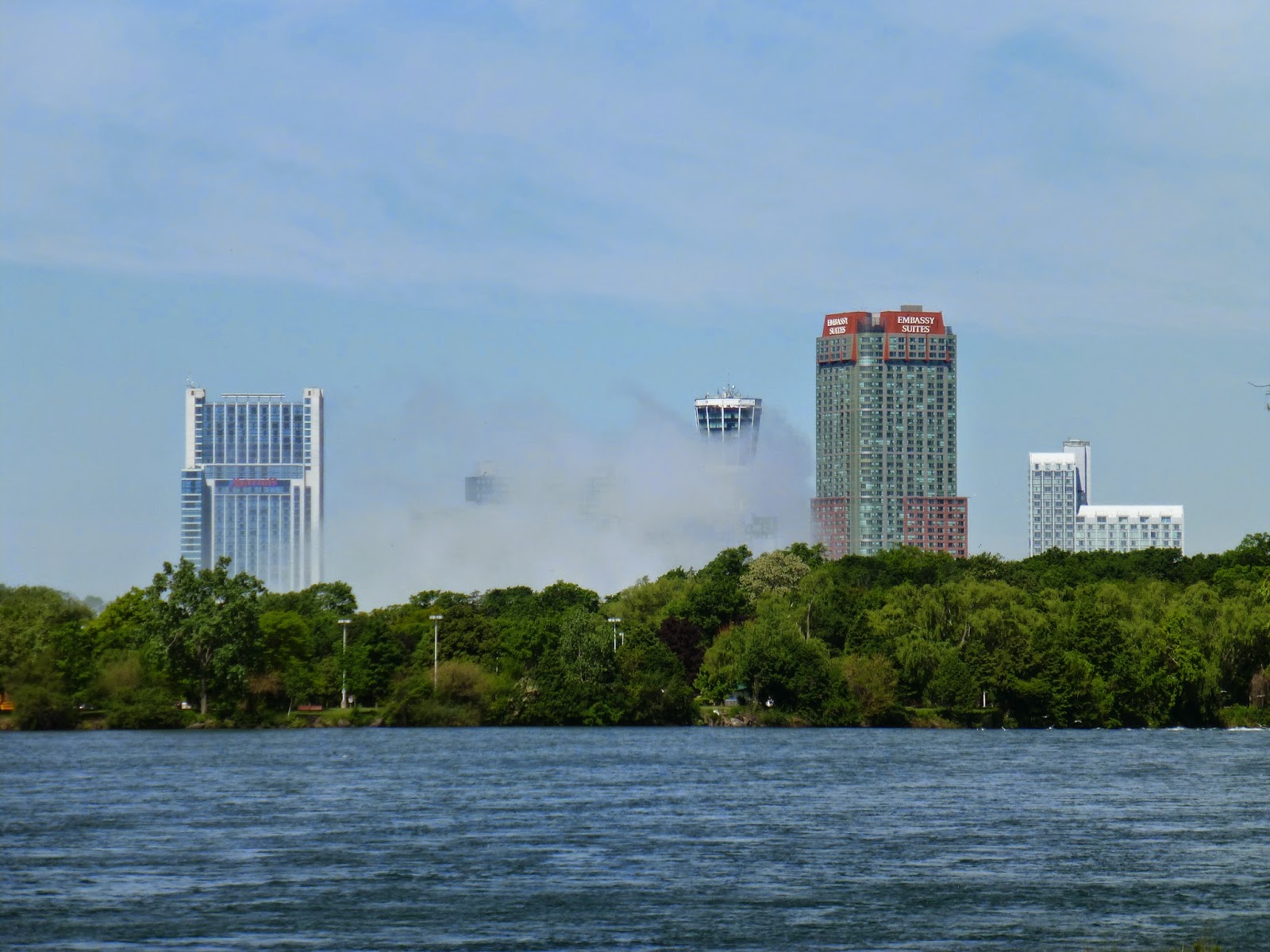 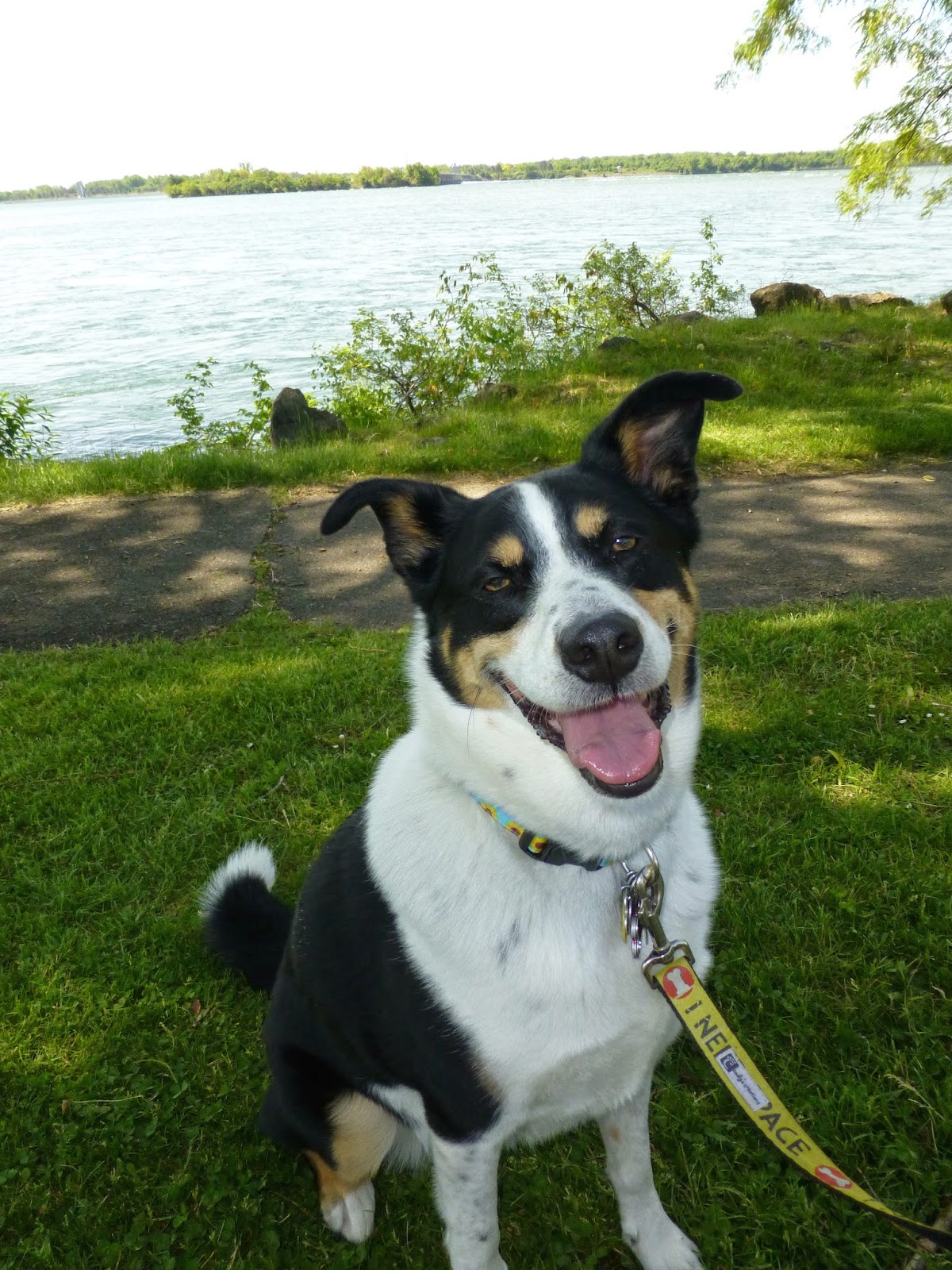 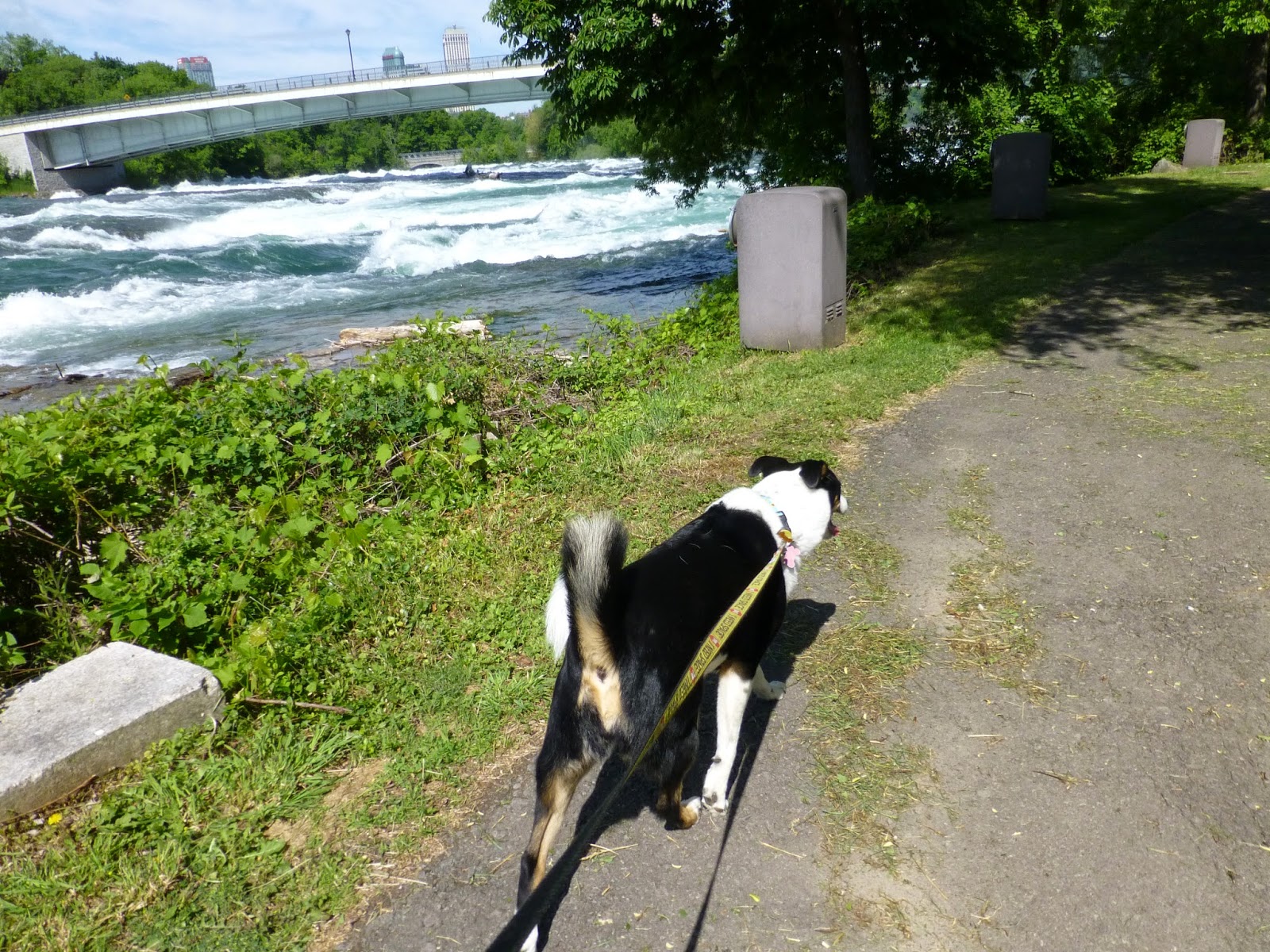 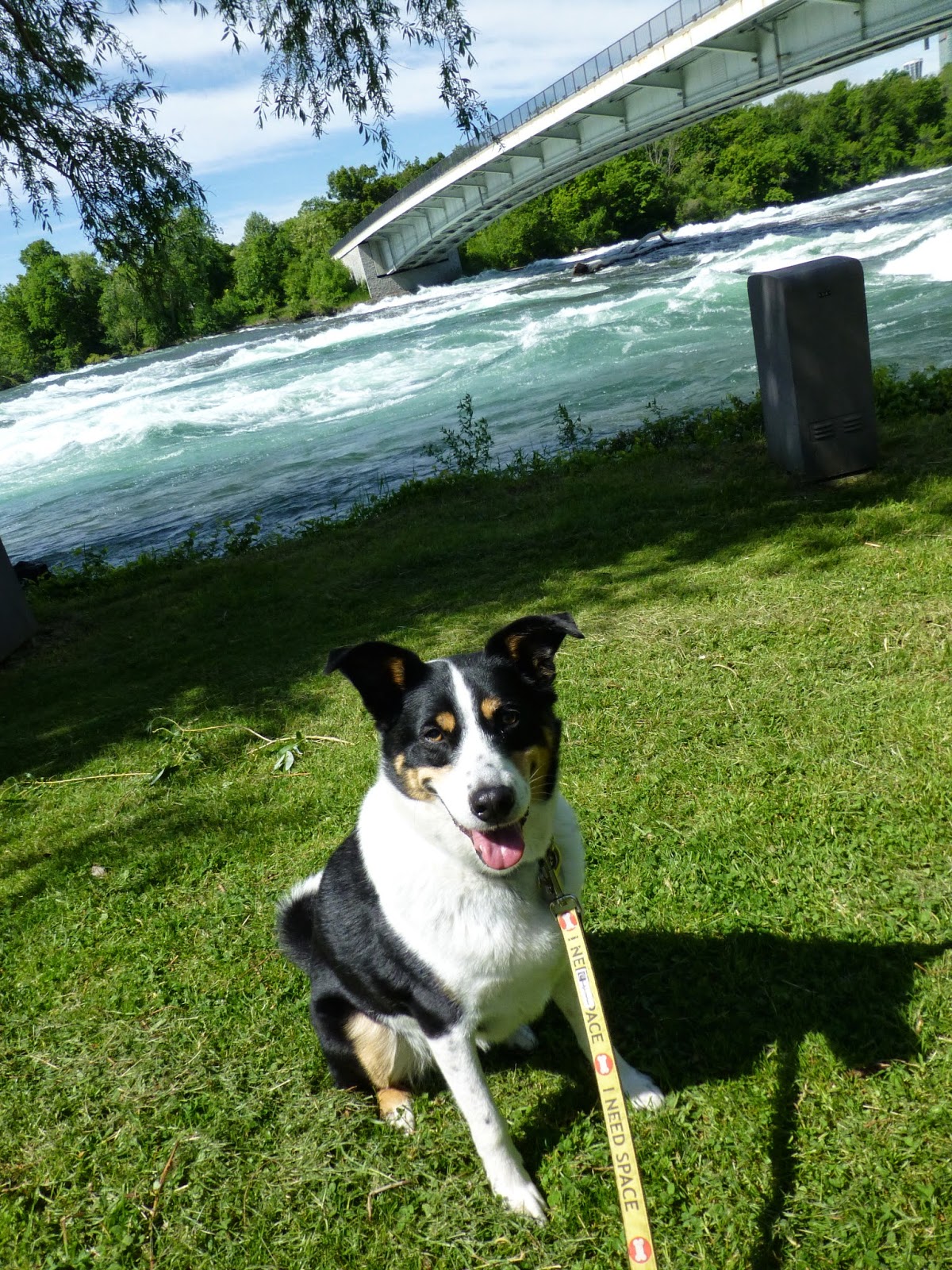 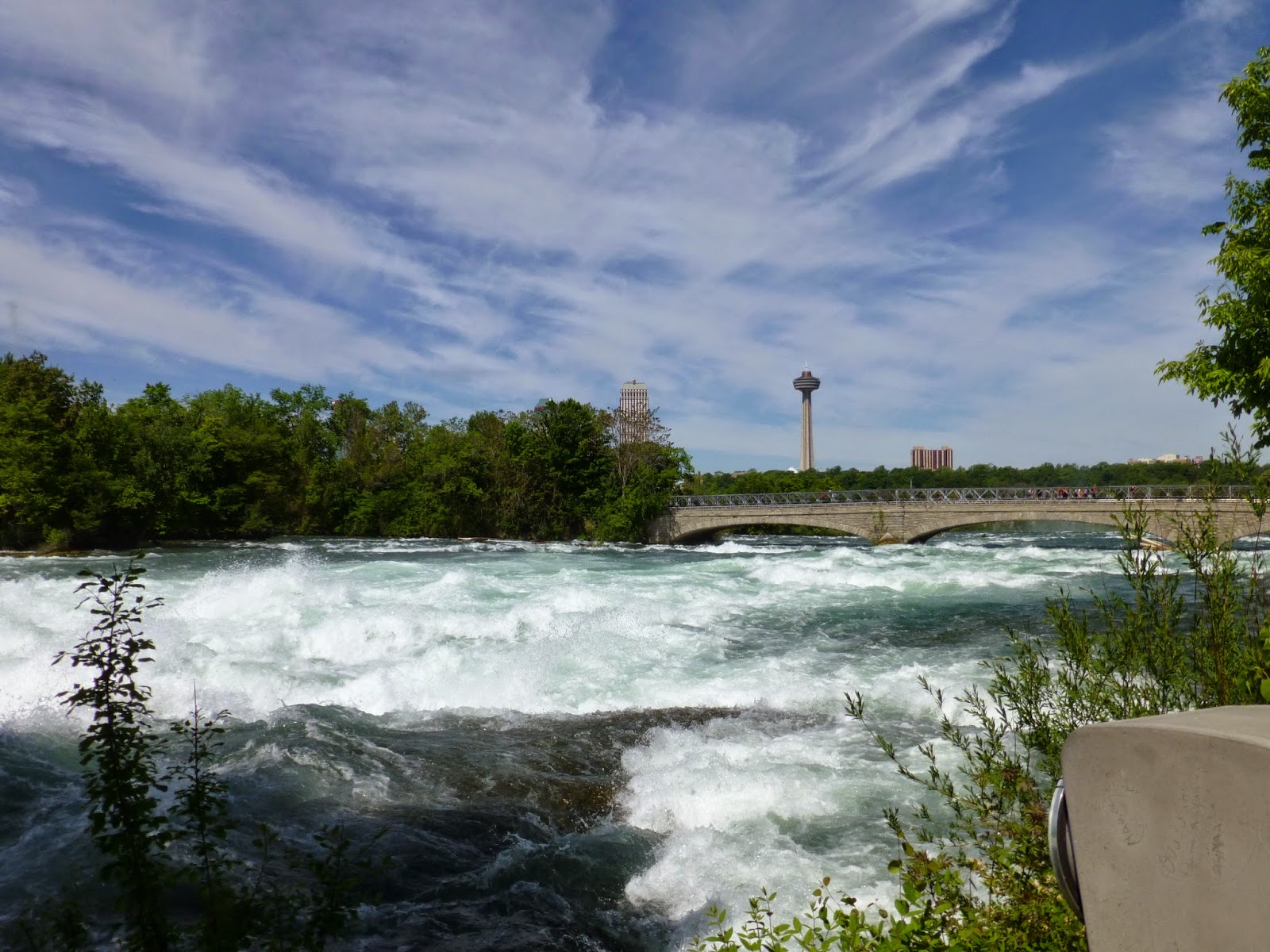 I was beginning to think that we were going to be in the park without ever actually seeing the falls. Eventually, we found a sign that said "Falls" and followed it down a little path that didn't actually look like people were supposed to be walking in that direction. Then we found another walkway and, lo and behold, there were the falls. 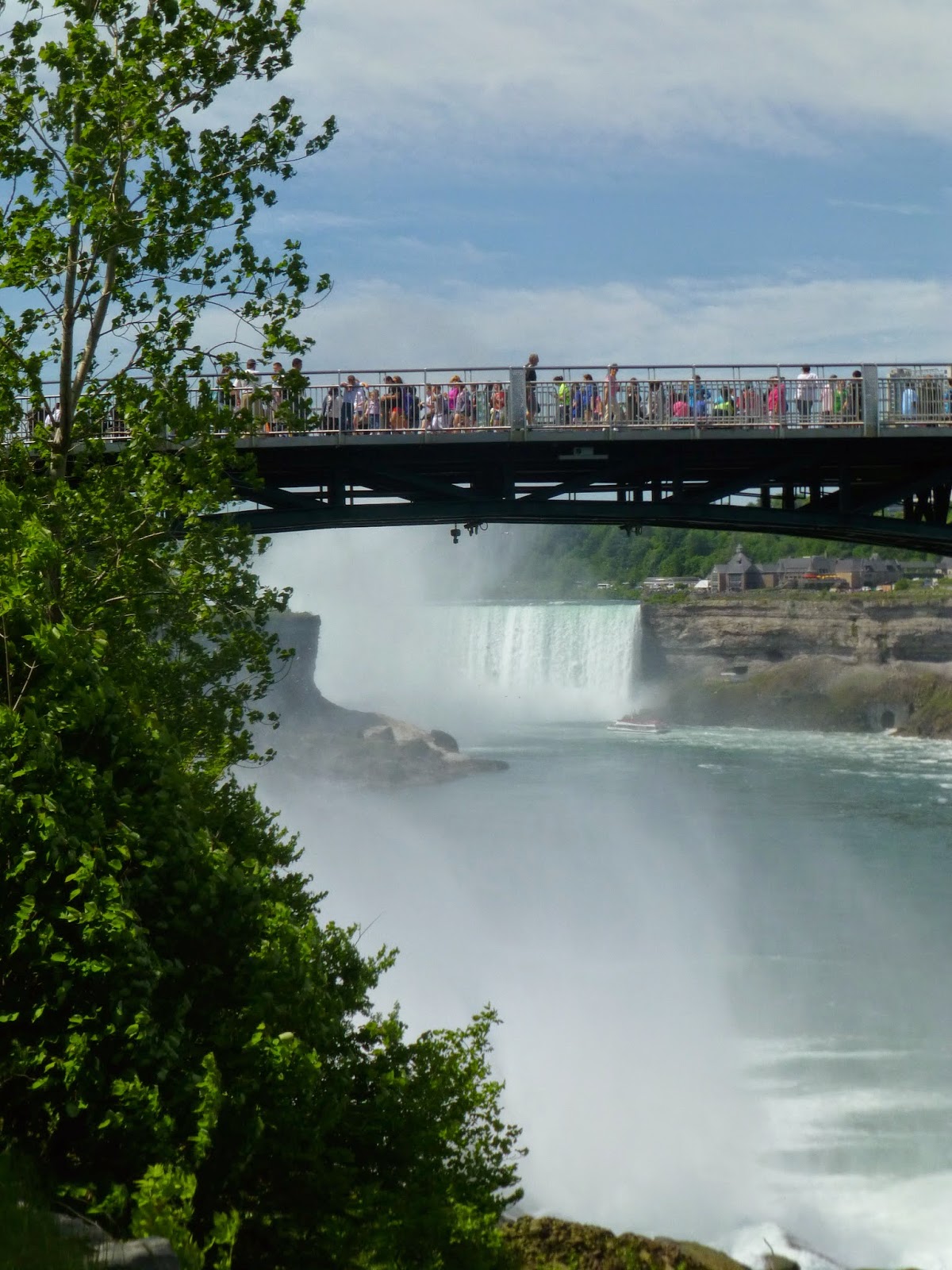 Several parts of the trail were closed for construction, so it wasn't entirely clear how to get out onto that overlook (although obviously other people had no problem figuring that out). It also wasn't entirely clear if dogs were allowed on the overlook. With my fear of heights, I would have been hesitant to go out there without all of the people and without a dog, so I was not sad that we didn't get closer to the falls. Seeing them from a distance was good enough for me.

In the other direction on our new trail, there were signs leading to the gorge trails; however, by that point we'd already walked over 3 miles and it was getting warmer. We walked down the path a little ways, but when the gorge trails didn't become visible immediately and it became clear that we were going to have to walk on more blacktop, I decided to call it quits and head back to the car. 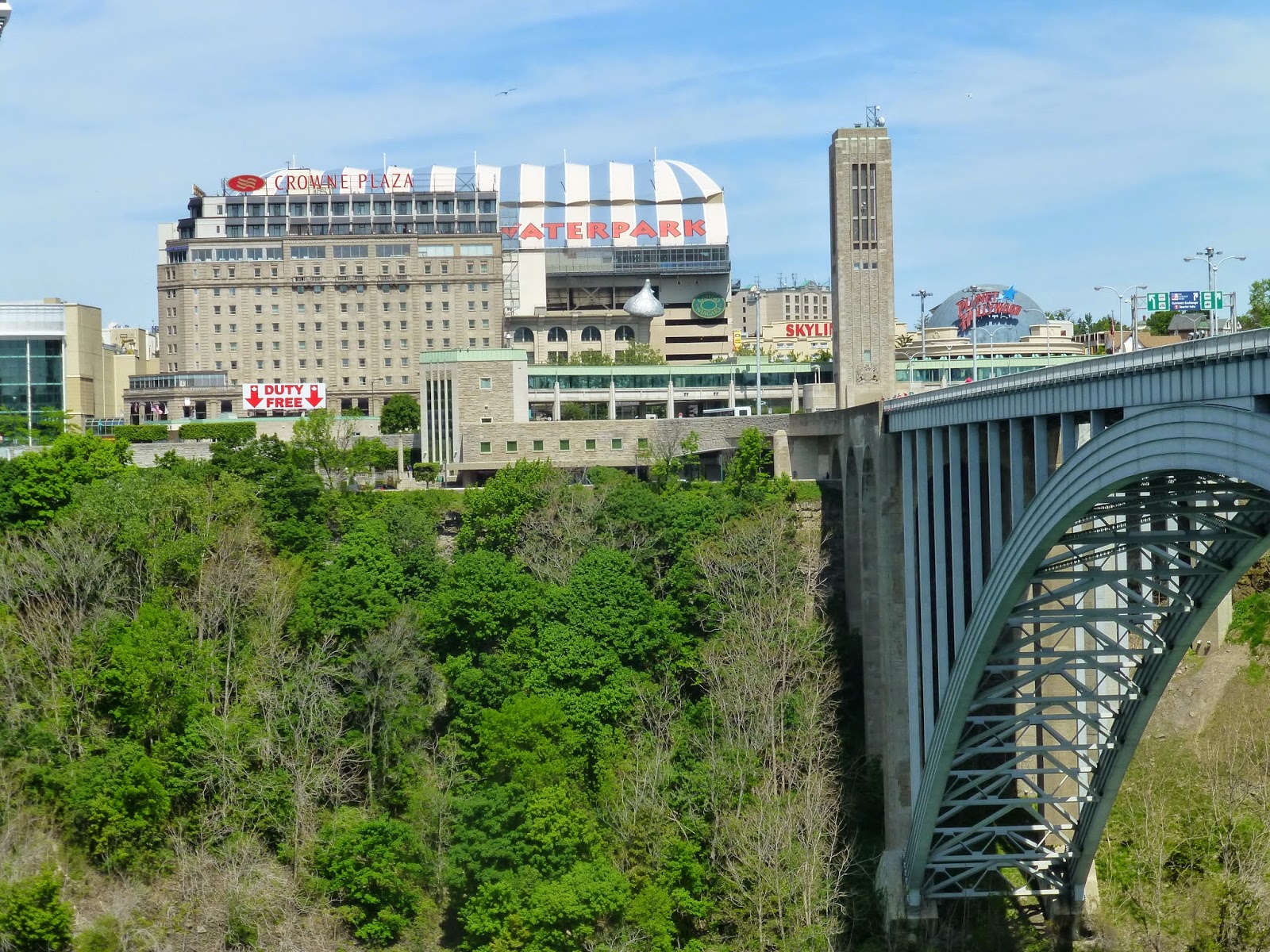 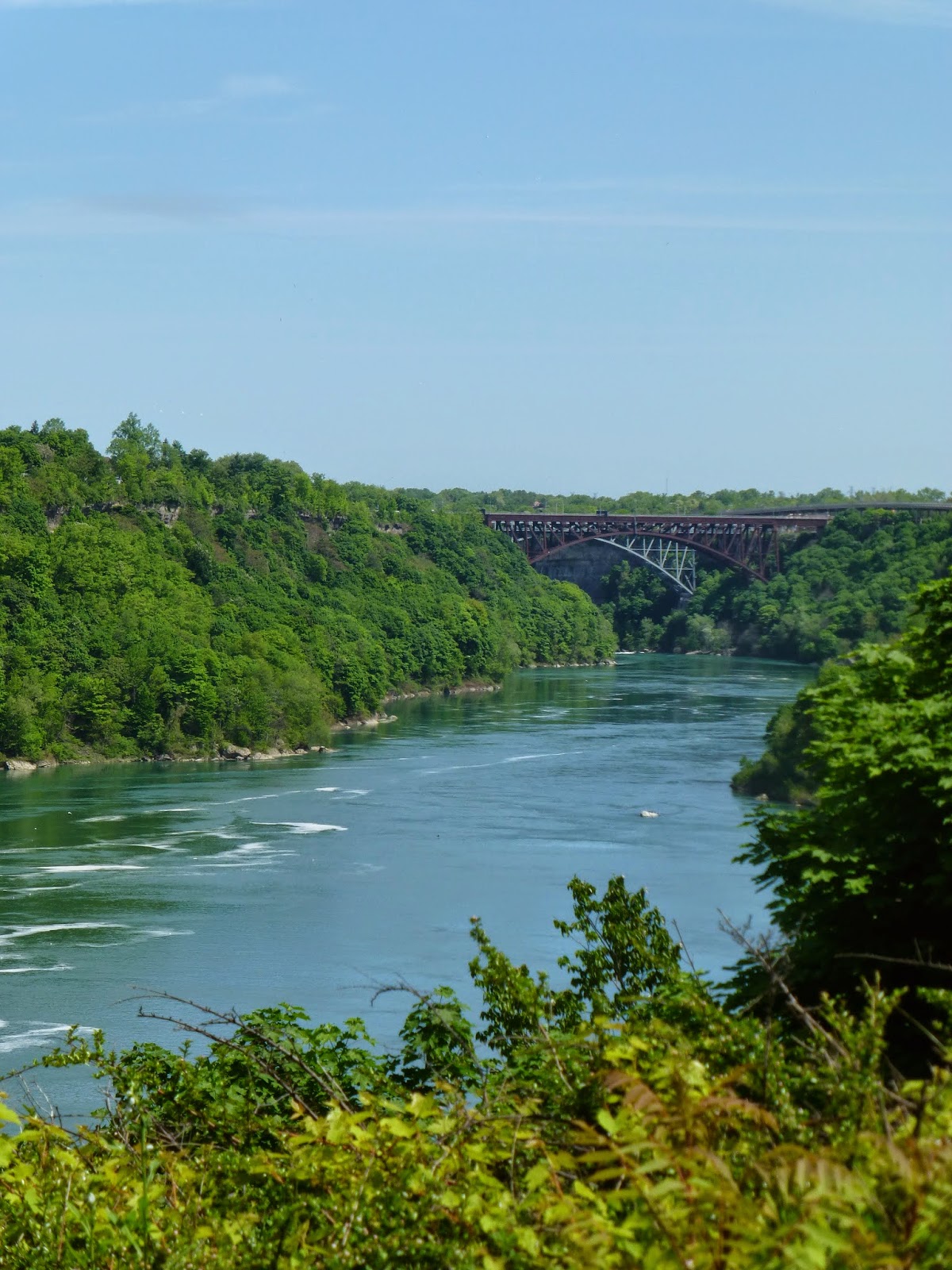 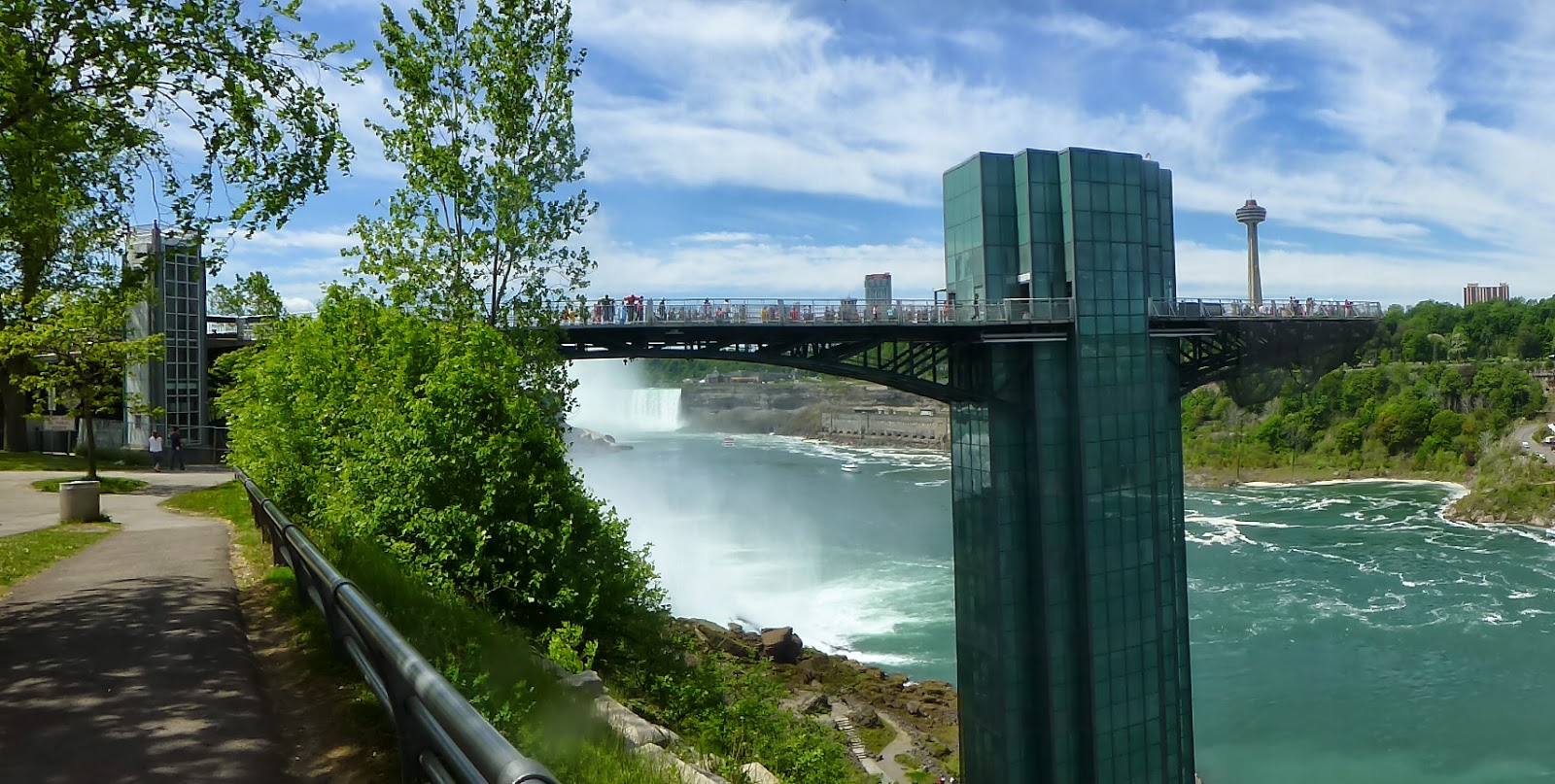 We ended up spending about 2.5 hours in the park and got in a little over 4 miles by the time we got to the car. It was a nice change of pace from walking in our neighborhood, but definitely not a place we're going to be heading back to on a regular basis.

The only thing we missed out on doing was heading to Canada just to say we'd been. But in my morning haze, I'd forgotten my passport and Barley's vaccination certificate. When I saw that the bridge to Canada was called the Rainbow Bridge, I decided it was probably better not to go across that with Barley anyway.

I hope everyone else got to do something special while keeping their dog's fit this week! We're linking up with SlimDoggy, Peggy's Pet Place, and To Dog With Love for FitDog Friday.