Livin' on the Ledge

Since our Niagara Falls adventure, Barley and I have been sticking pretty close to home. Partly, it's because now that noseworks class is over we aren't already out near the parks in the mornings, so it's just easier to toss on walking clothes and head out the door and get our first walk out of the way. Also, it's been kind of hot (if you can call low 80s hot--Barley does), so it seems silly to waste 30+ minutes of cool morning air in the car to go on an adventure. We haven't even ventured to the lake much because during this time of year there are lots of tourists camping and staying in the cottages down by the Geneva-on-the-Lake strip, so the trails have more bikers and joggers and sunbathers on them on the weekends, so with the exception of a few weekday trips, we've avoid it.

Even though we can easily get 3+ miles in our neighborhood no matter which direction we go, we've gotten bored with our normal streets. When I saw Thursday's high was 75, I thought it was a perfect day to get out for a little morning adventure and try our 19th hike out of Doggin' Cleveland.

We went to the Nelson-Kennedy Ledges State Park (#9). I'd been interested in this hike for awhile, but after the terrifying experience of South Chagrin Reservation where there were some parts of the trail that weren't wide enough for me and Barley to walk side by side, I was nervous that this might be the same kind of experience. Then I remembered that Chapin Forest Reservation, one of our favorite places, also has ledges and even though it would be possible to fall over them, the trails are wide and, in a lot of places, flat, so I decided to be brave. After all, if the path made me uncomfortable, we didnt' have to go down it, right?

Doug Gelbert's description in the book said that the trails weren't well marked and brochures weren't likely to be stocked, so on Wednesday night I looked up the trail map, studied it on the computer, printed it out, and then left it on the printer . . . Oops.

I was already almost to the park when I realized the map was on the printer still. We can blame Soth. My printer used to be out in plain sight, but then he peed in it--so I got a wireless printer that stays shut up in the closet in the spare bedroom. Out of sight, out of mind, I guess.

Gelbert has said a lot of trails were not well marked and we've never had much trouble following the trails. Even if there aren't clear markers, usually it's pretty obvious where the trail is and most parks we go to have big loops for all of the trails with maybe some connector trails in the middle. From the map I'd studied, it looked like there were big loops and also some that were just straight from one end of the park to the other--and the park was one big north-south rectangle, no weird shapes--so it didn't seem like it would be too hard to follow them. Plus, I could always pull the map up on my phone if necessary, so I really wasn't worried.

As soon as we pulled up to the park, I was glad we'd decided to visit. The ledges were visible as soon as we got on the trail and they were stunning. Barley was a little stubborn and wanted to look anywhere but at the camera, but we got several pictures in front of various ledges--of course, none of them are labeled and the map wasn't all that clear, so I don't know what many of the formations are called. 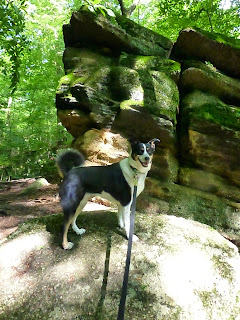 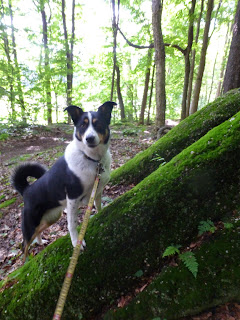 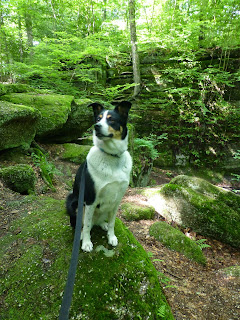 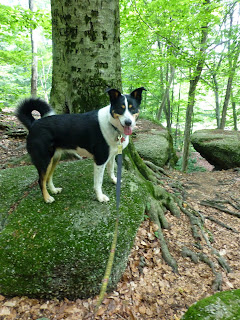 In addition to the ledges, there were some tight squeezes on the path. Most of them, we were able to get through by going one at a time and sucking in my gut--a few almost required me to take off my backpack, but for the most part we fit without much trouble. 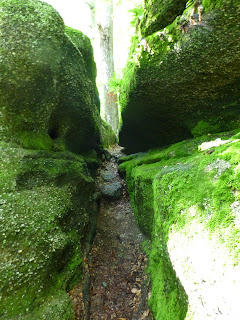 There was also a cave that we ended up in. It was nice a cool, but it was damp and dark and a little creepy. Barley was not interested in hanging out there long enough to sit and take a picture. I couldn't really hold that against her. I wasn't interested in sticking around there too long, either. 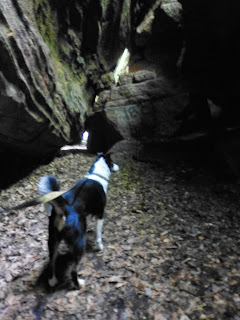 We also found several different waterfalls on the hike. The first one we came to was Cascade Falls. 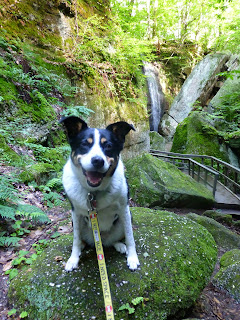 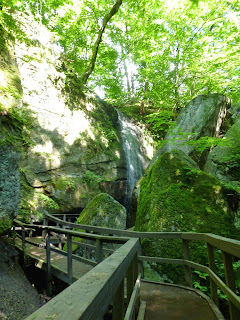 Underneath Cascade Falls is Gold Hunter's Cave. According to Gelbert, this cave "was the site of a brief and fruitless gold rush in the 1870s." From the boardwalk leading up to the cave, we got a nice mist, so I think on a really hot day that would be a great place to visit mid-walk. 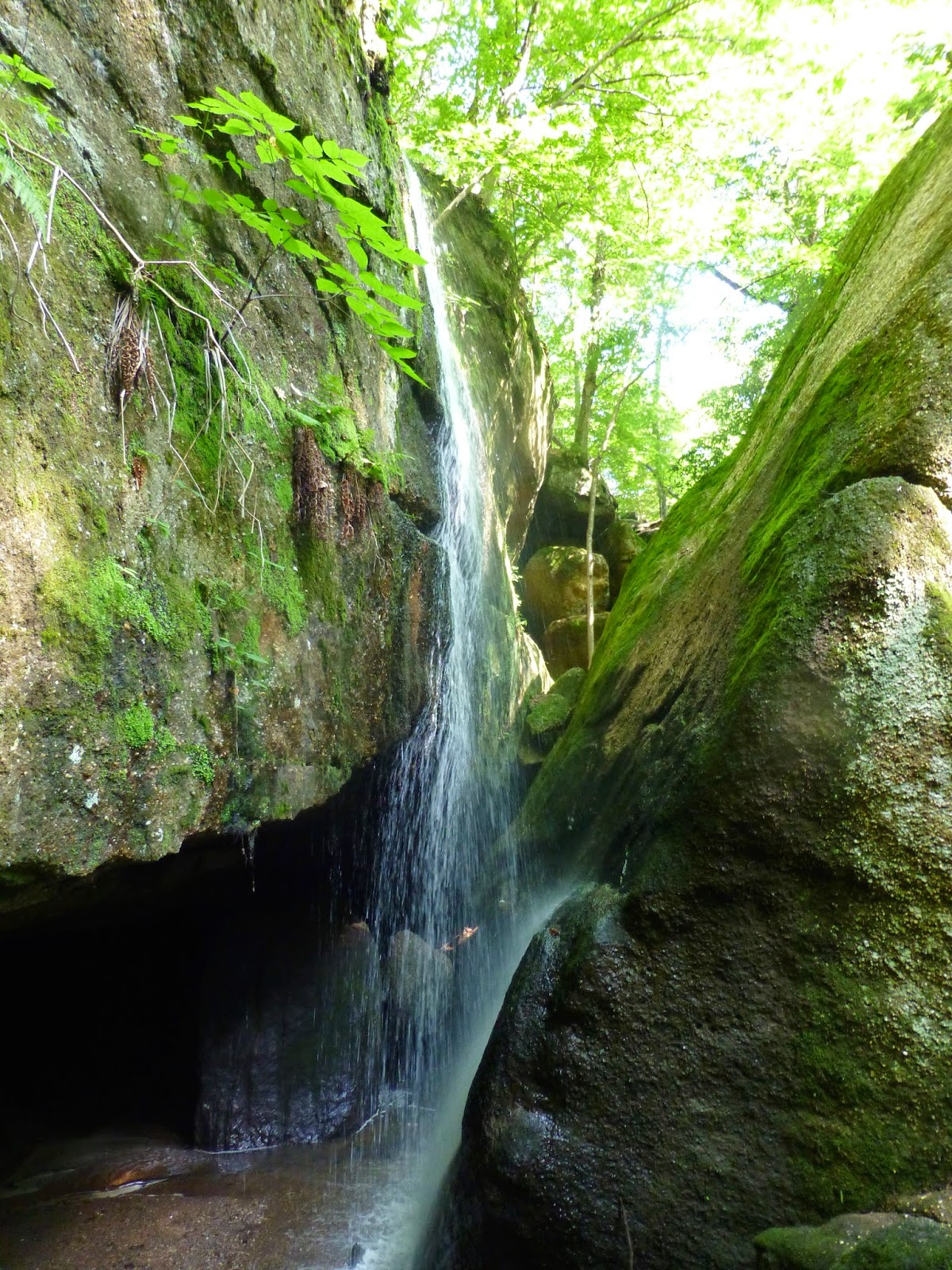 Then we saw another waterfall. Possibly Minnehaha Falls. Again, the map wasn't all that clear and this didn't appear to be in the part of the park the map identified as Minnehaha Falls, but there were also only two falls listed on the map, so . . . 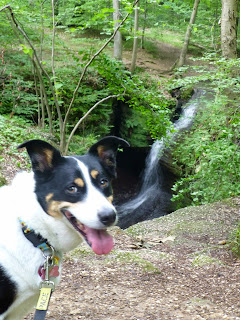 At first, I was worried that we weren't going to log much mileage on this walk. We walked a lot, but my Garmin GPS watch sometimes struggles with downhill hikes because we don't move fast enough, so it pauses and then thinks we didn't actually go very far once it resumes, so it only really logs the change in elevation, but not the actual distance we moved down the trail.

After we went to Cascade Falls in the north end of the park, we found that the trail was pretty wide and flat once we got to the top of the ledges (which didn't even seem that difficult of an incline, but somehow we ended up above Cascade Falls). After that, the Garmin had no trouble keeping up with us. 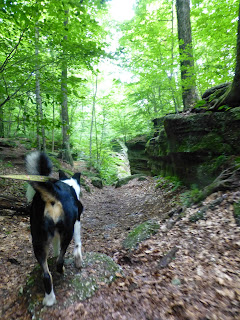 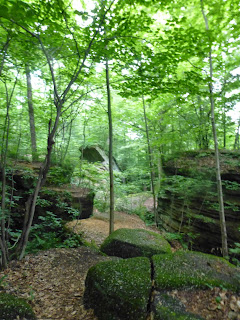 The whole park was nice and shady and the rocks were all damp and cool, so when we'd take a little break, I'd have Bar lie on the rocks to cool her down even more.

Unfortunately, the poorly marked trails didn't work in our favor this time. We actually did get lost. Really lost. There were a few trail blazes on a few trees, but not many and some of the ones that were there were so faded it wasn't clear if they were white blazes or light blue blazes.

We had done a few loops on various trails to see different angles of ledges, but I still had a pretty good idea of which direction the car was. After we got back to the part where I thought we should be heading down to the car (which I could see far down below), we only found teeny tiny passages, which we hadn't taken to get up to the trail. I found a trail past the waterfall we were near (which I now know was the top of Cascade Falls), so we took it. Then we were on a much wider trail than we'd been on before. I knew we were parked at the north end of the park, so I decided we'd go that way. Somehow, we encountered a bog--which we were not wading through--so we turned around, but couldn't find the path we'd taken to get onto this trail. We kept walking. Then all of the sudden there was a fence with barbed wire on our left--which was the direction we had come from--and I knew that couldn't be good. We walked a little farther. Then I saw a lot of barrels that looked like trash cans--the park clearly stated that there weren't trash receptacles outside of the parking lot, so I knew we weren't in the park anymore.

I knew we needed to get back to the park, so we went back past the barbed wire and just kind of traipsed through the woods until we heard people and followed the voices back to a trail. For a while, I was afraid I was going to have to call the cops or a park ranger or someone to come rescue me. How embarrassing.

Once we were back in the park, we pulled over onto a big rock and drank some water and tried to regroup. Then a group of people came up from under the rock we were sitting on and stopped to chat. It didn't really look like a trail, but I figured we couldn't get more lost than we had been, so we gave it a try. Sure enough, it took us right down to the level where the car was. We'd been a few feet from the  trail back to the car until we went the wrong way.  Oops.

Even though it wasn't hot and there weren't dangerous cliffs on the trail we ended up on and the trail was actually really peaceful and nice, it was still one of the scariest moments Barley and I have had hiking. I really wasn't sure how we were going to get back to the car without calling for help. It kind of ruined the really nice hike we had had up until that point. I was scared and I felt stupid for not paying better attention to the blazes--but once we got back to the trail, I realized there wasn't a single blaze anywhere between where we'd made the wrong turn and where we were parked, so then I was just annoyed with the State Park system for not making it clearer.

We ended up walking 4.27 miles on our adventure (and about 1.25 of that was outside of the park!). We did a little happy dance when we got back to the car and then headed straight home. After getting all of the mud and spider webs off, we both snuggled up in the living room and were just happy to be home.

What about you? Have you gotten lost on a hike? How did you handle things?

We're linking up with SlimDoggy, Peggy's Pet Place, and To Dog With Love for FitDog Friday. As of Thursday evening, our mileage is 481.20 miles--we are so so very close to 500 by the end of the month, but we've still got a few big walking days ahead of us. Wish us luck and check back next Friday to see if we made it!