I love getting mail. Not the bills and junk mail, of course, but little notes or care packages or my weekly New Yorker. It's just exciting to see something fun in my mailbox. It makes it worth sticking my hand through the spiderwebs that appear on the mailbox no matter how often I sweep them off.

This week, though, all the mail has been for Barley!

On Monday, she got her BarkBox. I had heard the mail man out on our front porch before we went for a walk, but I figured there was probably nothing exciting, so I didn't even think to look at the mail before we went off for our walk.

She put the breaks on and wouldn't budge off the porch. That's when I noticed her BarkBox tucked in the corner. I stuck it inside and she reluctantly went on our walk.

After grabbing a quick sip of water when we got home, Barley was pawing at her box. She knew the mail was for her, so I cut the tape and let her figure out how to get in. 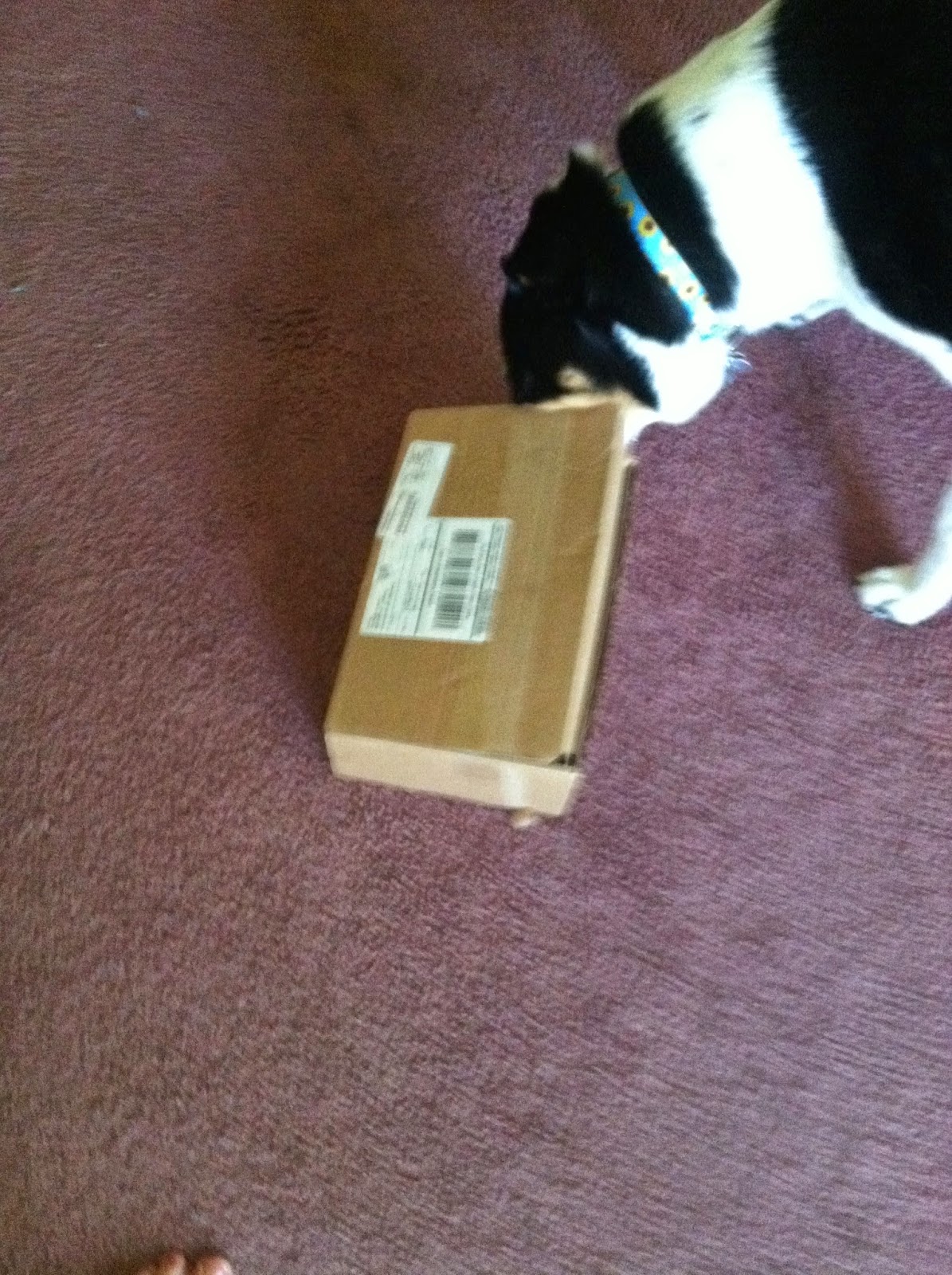 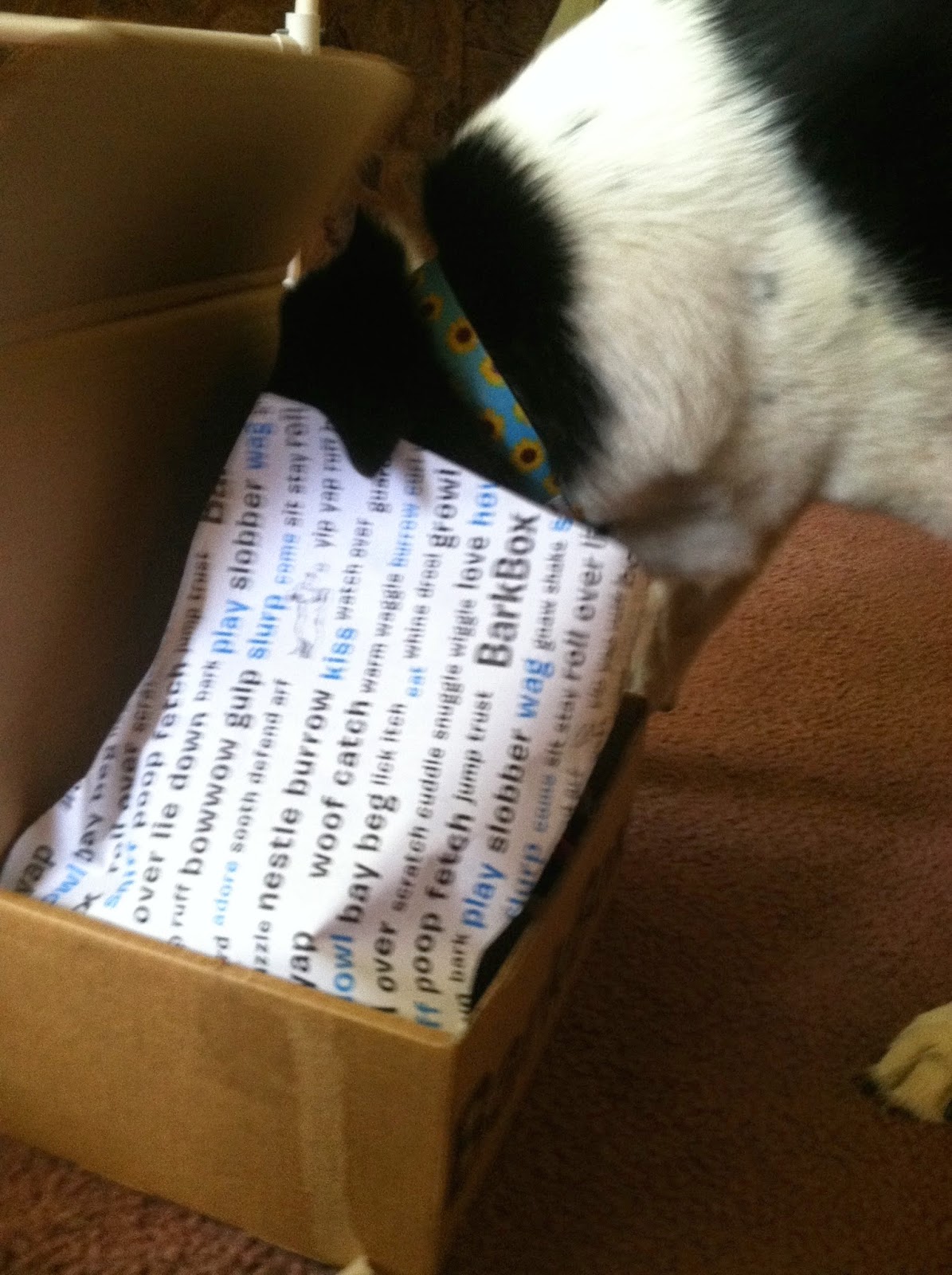 Once she'd wiggled her nose into the box, she let me get a look inside, too. There were the usual yummy treats--my guess is the banana and beef liver treats were the ones that let her know this box was hers. The real surprise, though, was this:

I guess part of the reason I got Barley a BarkBox subscription was so that she would get treats and toys I couldn't find in our stores and could have a little variety--and this is certainly not something I ever would have brought home for her! (Although, I might have sent one to my brother had I come across them in the store.)

On Wednesday, Barley got more mail. Usually, she's not super interested when I open packages (probably because they're usually boxes of books--and she does not like books). This time, she was intrigued.

Once I got Barley out of my lap, I pulled open our scent kit! After weeks of waiting, it is finally here and we can do some official practice to start getting ready for an Odor Recognition Test (ORT). We don't have a date on the books yet, but we're excited that we can start practicing with odors now (instead of our makeshift cotton ball with ground cloves on it!).

We've done a little practice since it came in. We started a little bit easy and paired the odor with a treat since she's only used the real odors in class. Since we were excited to get started, we didn't waste time getting boxes out of the spare room and I just hid the scent around the living room: on the coffee table, on stacks of books, on the DVD shelf. Barley did great, so after a few searches I quit pairing the scent with a treat and she had no problems.

Today, we broke out the boxes and she did great! I'm the one that has a harder time, though, because her alert is so subtle. I think I've mentioned that before. Basically, she bulldozes into the boxes--if the scent isn't there, she usually shoves the box away and then looks up; if the scent is there, she shoves the box around, but keeps her nose and eyes down. Since it's just me and Bar, sometimes it's hard to know if she's actually alerting me or if I am just jumping in and rewarding her as soon as her nose touches the box since I know where it is. I try to give her a few seconds and watch to see if she'll lift her head, but it's not easy!

We're looking forward to my sister visiting next month so that she can hide the odor for us and we can get a better idea of whether I'm actually reading Bar's alert or not. (If we're going to help her meet her goal of running in 5 states other than her own, she can help us with noseworks--that's what sister's are for, right?) We'll also get a little help from Barley's grandma when we visit my parents again later this summer. Hopefully I've been reading her alert right and not just jumping to conclusions!

Soth has been doing a little noseworks of his own this week. 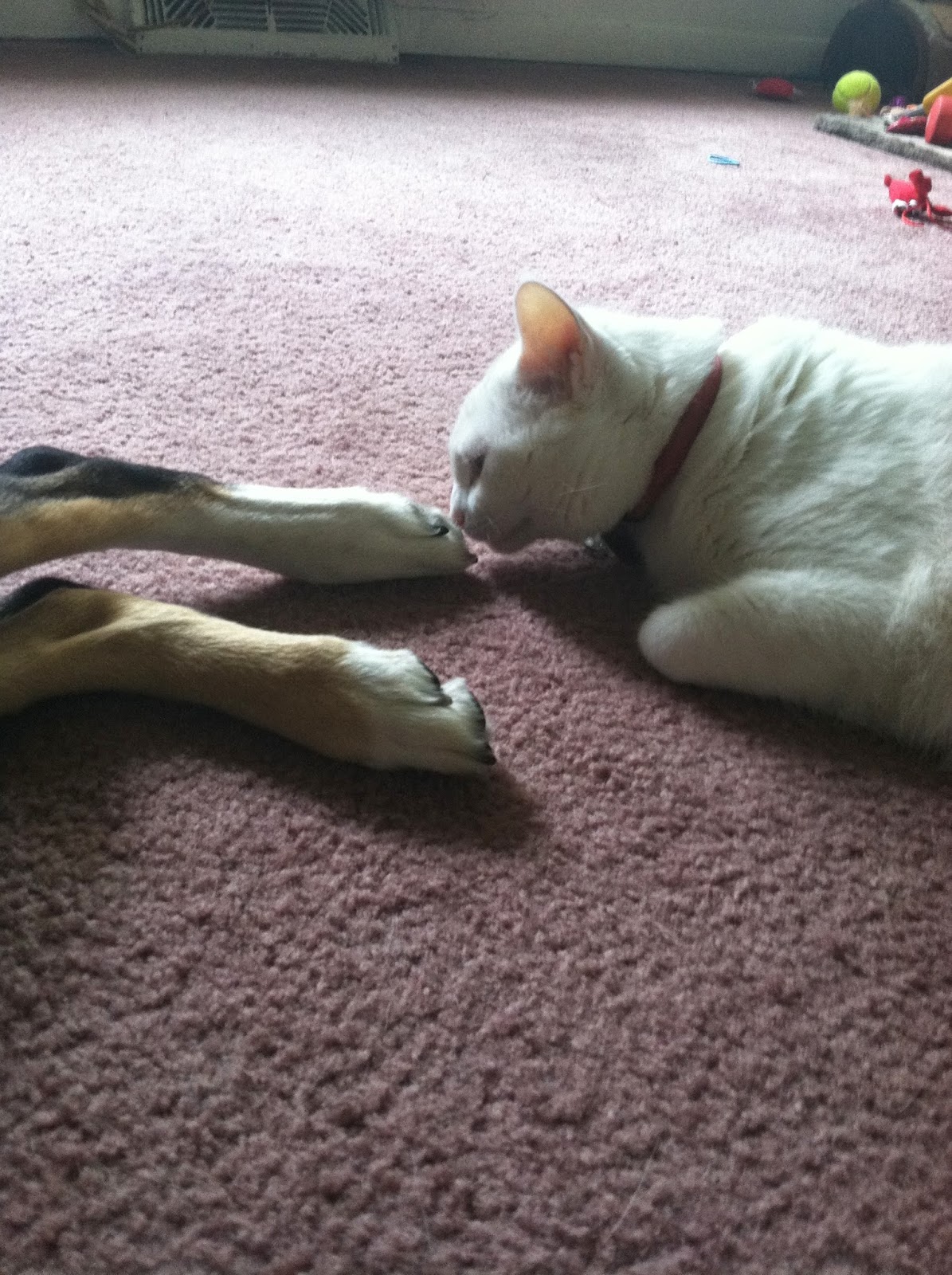 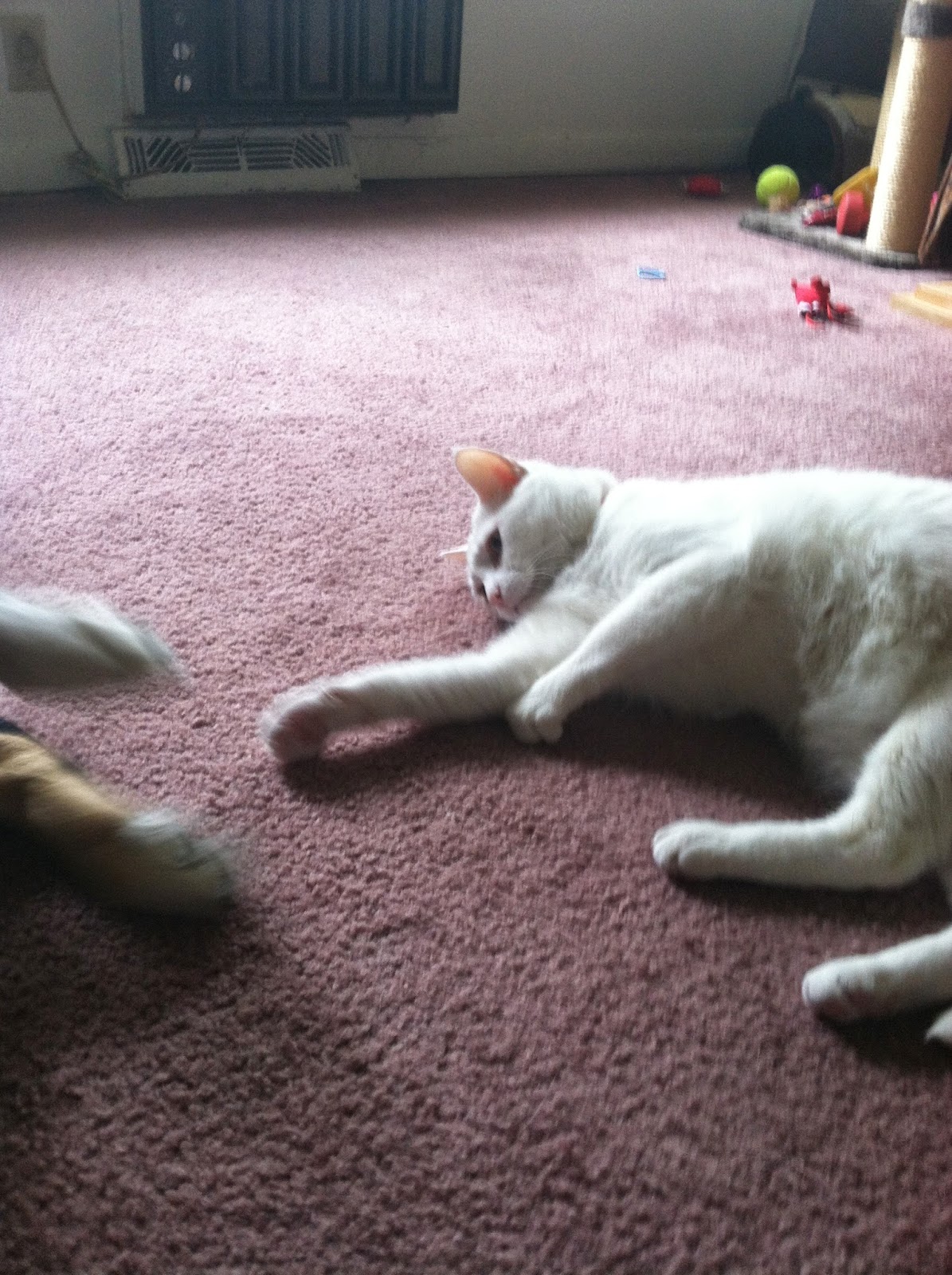 After spending several seconds sniffing Barley's toes, he took a swat at them and rolled away. His nose might be telling me it's time for his sister to get a bath.

In addition to keeping Barley's nose and brain working, we're making progress on our walking goal for the year. The website for Garmin is down right now, so I can't upload the data from our morning walk or let you know how we're doing on our journey towards 500 miles by the end of the month--but we have met or surpassed our daily goal every day since last Friday's post and I know we've passed the 450 mark, so it's looking good for us!

We're linking up with SlimDoggy, Peggy's Pet Place, and To Dog With Love for FitDog Friday and can't wait to read about how everyone else has been staying fit this week!