As much as Barley and I enjoy adventuring, we find plenty of ways to have fun at home, too. We ventured out to the Arboretum last Friday for a pre-fireworks hike, but the rest of the time we've been enjoying sticking close to home. Since K9 Kamp has challenged us to play some backyard games, I thought I'd share a little of what Barley and I have been doing in our backyard.

Neighborhood Walks
Since we live in an apartment, we don't have a huge backyard--we've got a little concrete patio and a little grassy area off of it and we're near the edge of the complex and not near an exit, so there's really nothing to draw anyone towards our "yard." But the lack of a nice big, fenced backyard means that we have to expand our territory a little bit, so just about every day we go out and tour our neighborhood.

We live right off of the historic downtown area, so we've got a lot of variety in where we can walk. Turn one direction out of our complex and we're in a very residential area. In the residential area, we get to practice all kinds of reaction to distraction because there are lots of barking dogs (and this week several loose dogs) and kids on bikes and scooters.  Our favorite activity on these walks this summer has been squirrel hunting! A few weeks ago I noticed a grey squirrel with an ALL white tail. Apparently, white tails are a recessive gene, so it's very rare for a squirrel to have an all white tail. The first time I saw it, I had left my phone at home because it was threatening to rain. The second time, the squirrel scurried around a tree before I could zoom enough and I couldn't see his tail anymore. We've found one with a partially white tail with a tiny bit of grey in the middle, so that's the best we've done capturing one on camera. Our hunt will continue. 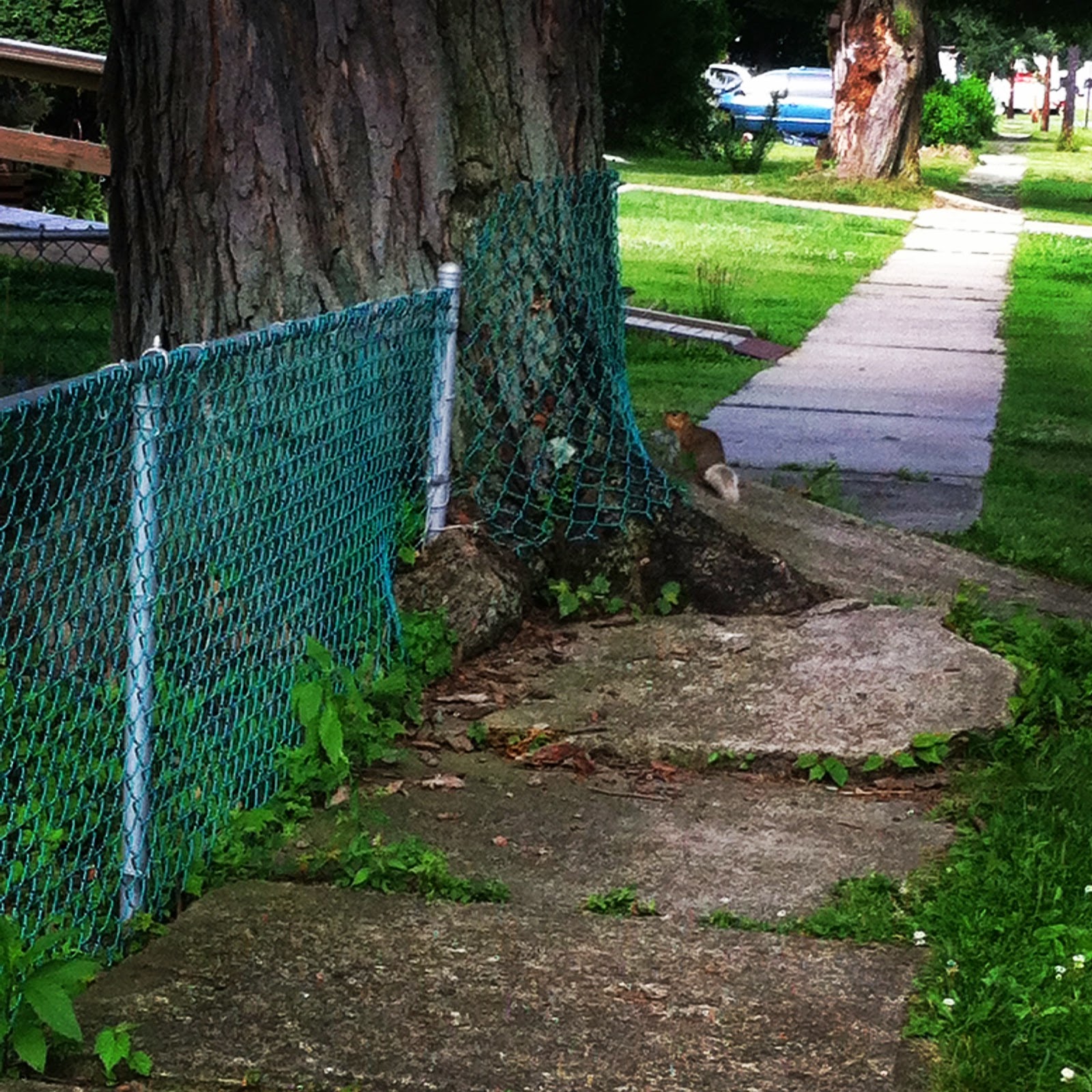 Turn another direction and there are some train tracks and a little baseball field. The baseball field has a big grassy area beside it with lots of trees, so sometimes we off road it and enjoy the shade--but it's also a great location to practice some obedience work like sit-stays and recall when we need different distractions than we get in our yard. To get to the park, though, we have to walk under the train tracks. The train tracks give us a chance to play with different paces from our normal walking pace. When we hear the sounds signaling the arms going down, we can either slow down and sit and wait from a safe distance or we can run and get under the tracks before the train gets there. Usually, we're close enough that a sprint gets us under the overpass and at a distance Barley's comfortable with long before the train comes into sight.


Usually, we do a combination of park and residential areas, but sometimes we turn a different direction and head downtown where we can do some sightseeing and practice some obedience skills.

We live in wine country, so outside of town there are huge vineyards with lots of grapes. Barley hasn't had a chance to go to one yet, but maybe soon. In town, though, they have some vines planted off of a square to promote the wineries, so we can visit some grape vines without getting in the car.

There's a winery without an attached vineyard in town, so we can enjoy the smells of their incredible wine burgers as we walk by and we can pose with the old wine barrels. 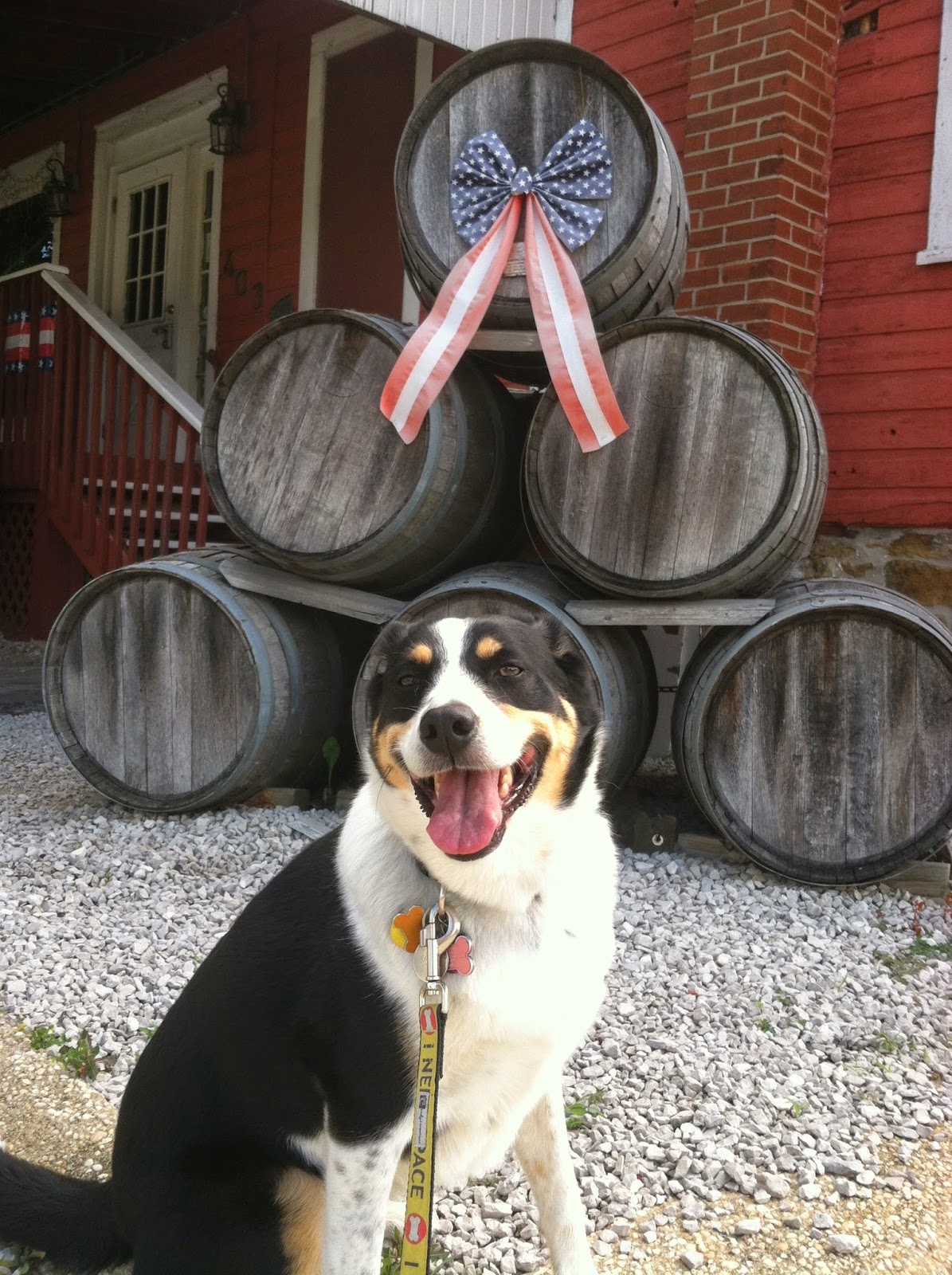 There's also a Civil War memorial nearby that we can stop to visit. It's hard to get a picture of the whole thing, though. One, it's on the corner of the busiest road in town, so there's not a lot of room for Barley to do a sit-stay far enough away to fit in the whole obelisk. Two, there are lots of loud vehicles heading up towards the lake and they make Barley very anxious, so I can't back up too far away from her or she forgets to smile. Three, there's no shade here, so I can barely see what's on the phone screen and just have to point and click and hope for the best! But it's a great way for us to practice short sit-stays with lots of distractions--I just have to make sure I don't push my pup too far and put her in situations that make her anxious. 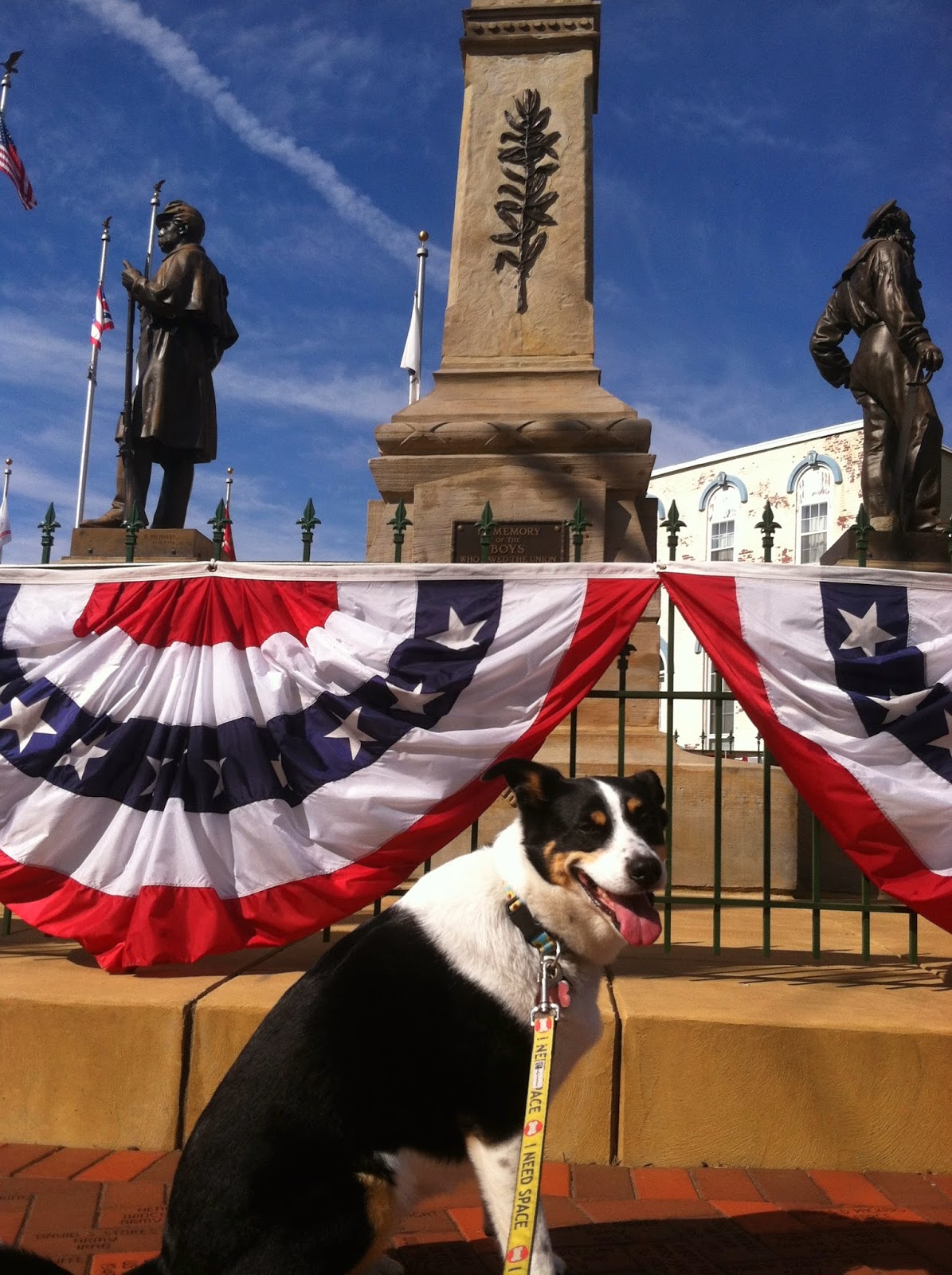 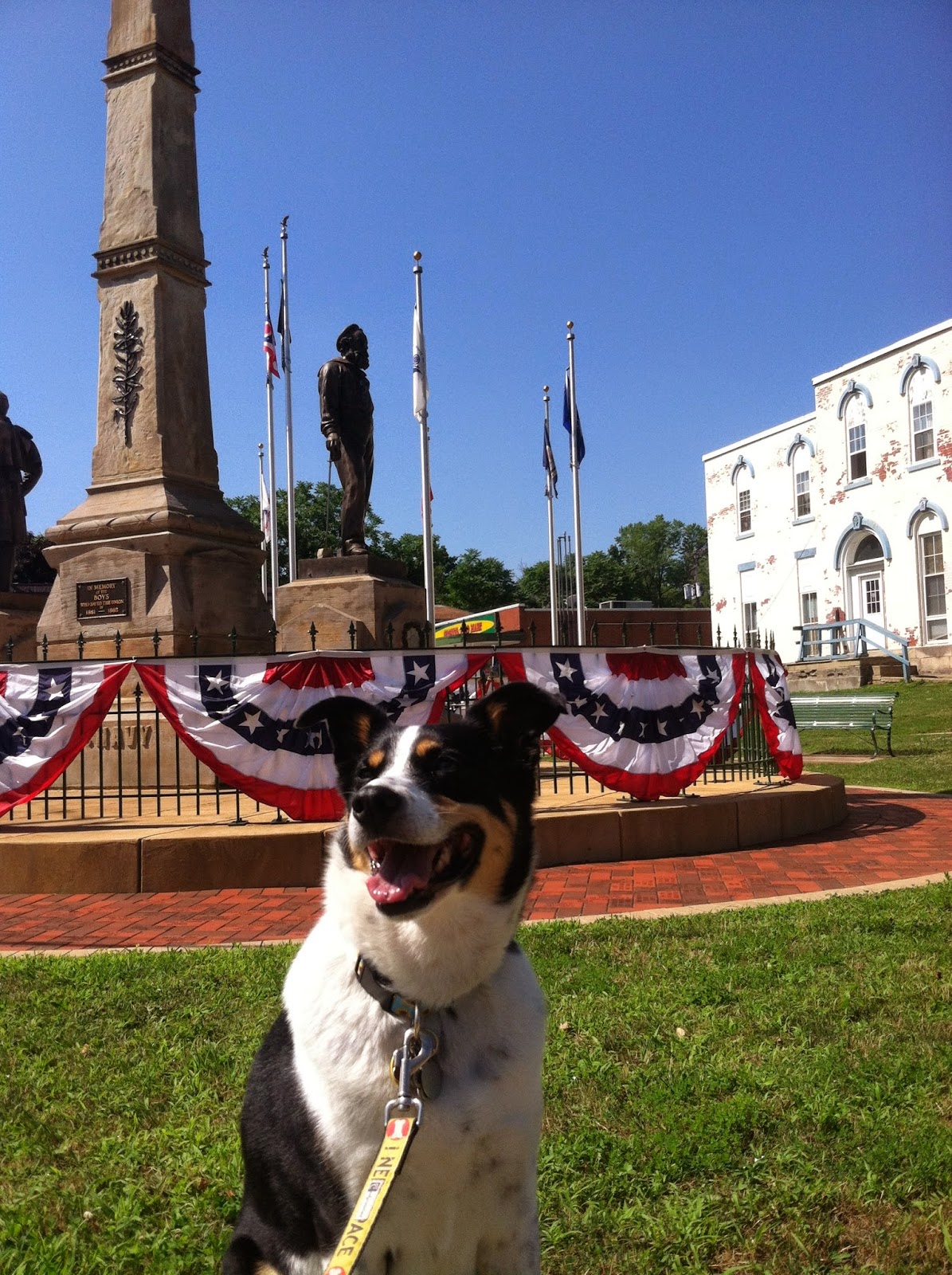 There's also a fairly ridiculous sight to see in town, the shortest covered bridge in the country. I believe it is 18-feet long. They built this a few years ago because our county also boasts the country's longest covered bridge, so now we hold two records. 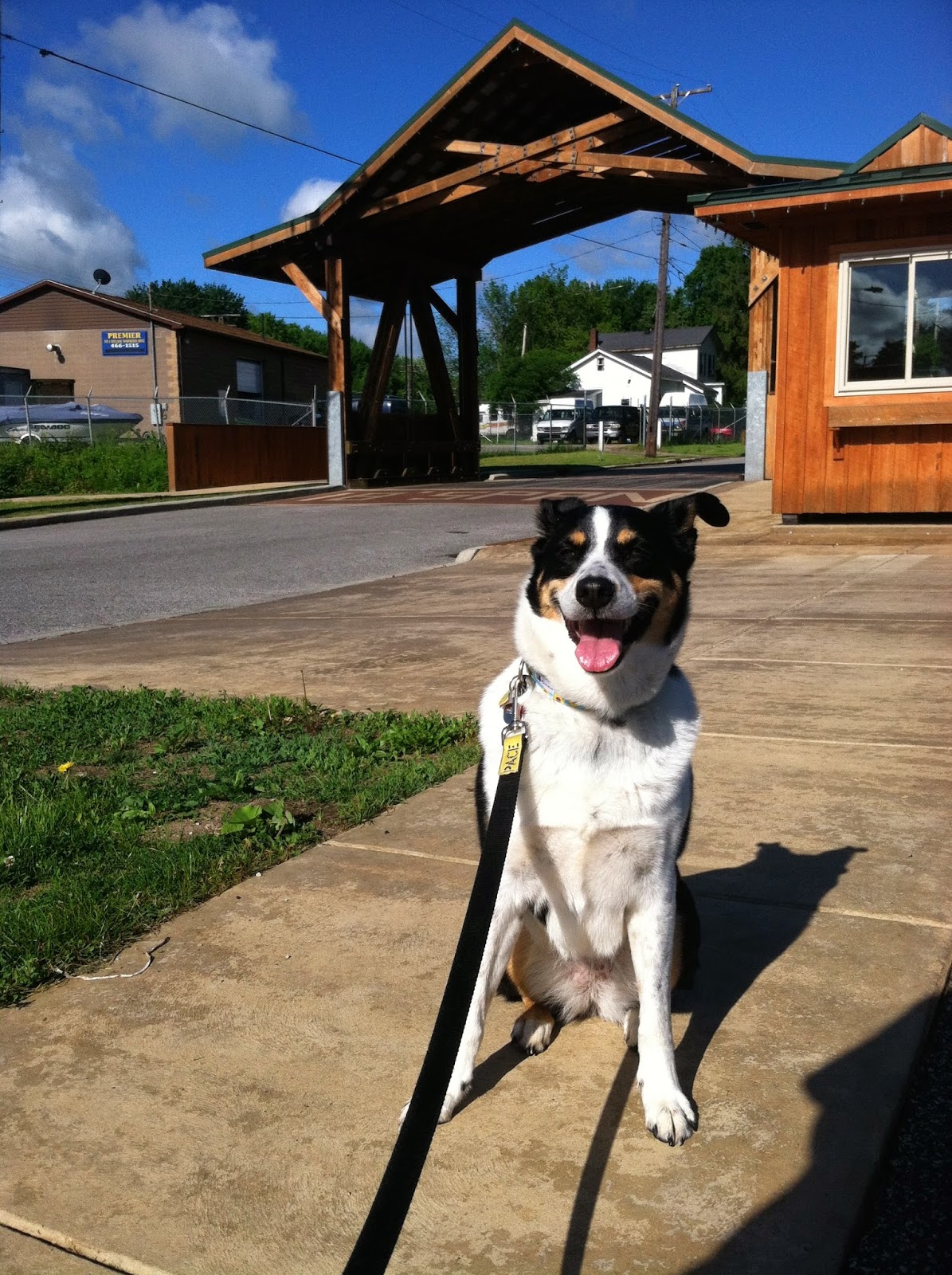 Noseworks
Lately, our routine has been taking a second walk in the evening and then if it's a nice night, we take my iPad outside and turn on the Pirates radio broadcast and sit on the porch. Usually, I take our noseworks stuff out with us and we practice searching for the odor.

The video shows several different searches Barley has done over the last few weeks. She doesn't have her usual energy in them because she's hot and tired, but you can tell she's working even though it's not quite as fast-paced as usual. In the first search, she figured out pretty quickly that the scent was near the bench--but she couldn't find it, so she backed away and then came back. This one took her a while, but she got it eventually. In the second search, we had the distraction of a train going by, but the extra noise didn't throw her off at all. In the third search, she had no problems at all, but the final search threw her off. Her nemesis, the Jack Russell who lunged at our French doors until one day Barley pulled her leash out of my hand and chased it down and inspired its owners to keep it on a tie-out, was barking in the background, so she was really distracted. The odor was also higher off the ground than we'd had it in a while (I hid it before her nemesis arrived on the scene--or I would have made it easier with the extra distraction). She knew the general area the odor was in, but she couldn't find it to put her nose on the tin and doesn't actually find it in the video. When she wasn't looking, I put the camera down, got out the bottle of Cheese Whiz, and squirted some below the tin to make it a little easier for her. Since we want to have 100% success, some times we have have to make adjustments to make things easier for her--even if it's something she can normally do without pairing the odor and food.

Obedience Work
When she gets too tired for noseworks, we cool off with a little obedience work. We practice some sit-stays and down-stays. Sometimes we do a little heeling practice by doing figure eights around things in the yard. We practice a little recall--all the things that we worked on really really hard when we were thinking about becoming a therapy dog and then quit practicing as regularly when we decided that wasn't in the cards right now.

Playing with Toys
Barley loves her toys. And by loves, I mean she's very very very gentle with them. We still have, and regularly play with, her very first toy. I don't worry about leaving toys in her crate with her when I'm gone because I know she won't shred them. She snuggles with them and then chooses one to bring out with her when I get home. She carries her toy outside with her to potty and then brings it back inside and sets it on the bed. Most of her toys are fuzzy and get bits of leaves or dirt stuck on them easily, so we don't usually take them outside. But Barley got this weird ghost/4-legged octopus thing in her BarkBox a few months ago and it's the perfect material for playing outside because things don't stick to it!

Fetch isn't easy to play in yard because she has to be on a leash, but as long as I do a running throw and have her on the long lead, I don't worry about losing an arm when she's chasing a toy down. Barley's not really a retriever, so fetch only lasts for a few throws, but it's fun to watch her chase down a toy and do a victory lap with it in her mouth. 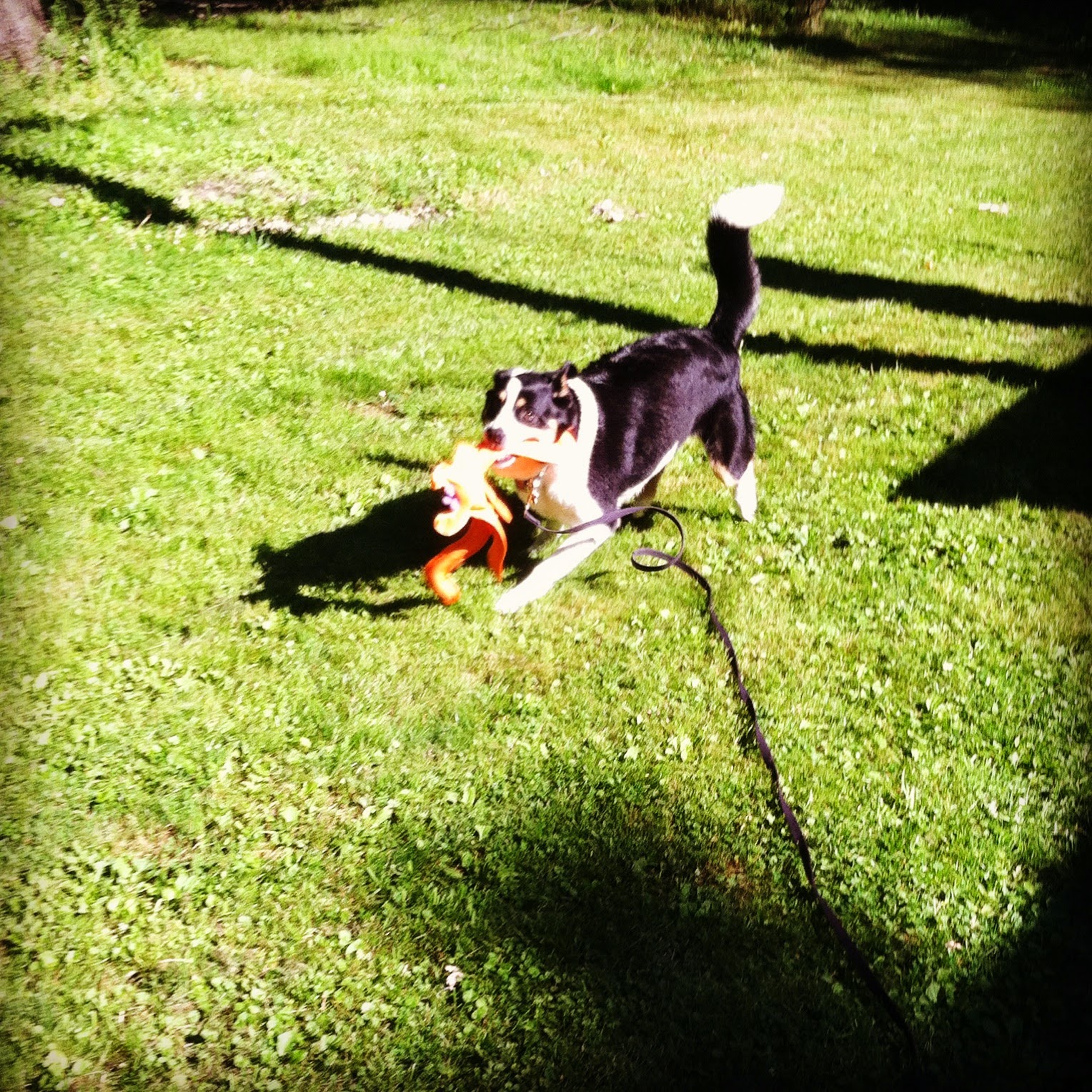 Barley's also not a big tugger. If I try to take a toy she has in her mouth, she lets go. Like I said, she's very gentle when it comes to her toys. But she's starting to learn that tug can be fun, so occasionally I can get her to play tug with me in the yard. When she lets go, I just toss it and we switch back to fetch. 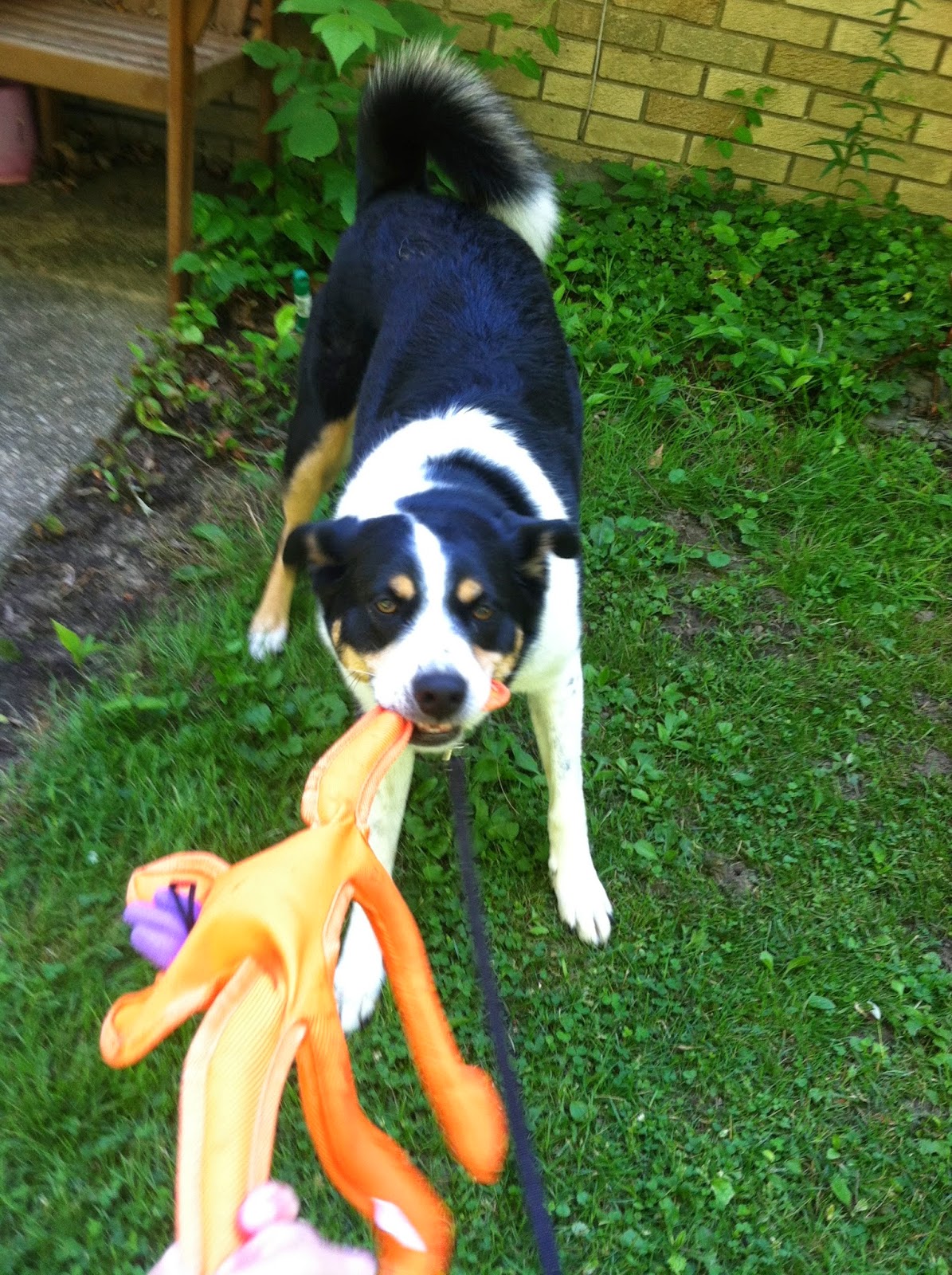 Cool Down
Usually, Barley's tired of the outdoors long before the baseball game is over (for a dog that LOVES hiking, she sure doesn't love to be out in the yard for long). I love to just sit outside and listen to the game, though, so we usually end our backyard games with a treat. Barley gets a Frosty Paws on the really warm days or a Kong with peanut butter and carrots while I enjoy a nice beer and another inning or two of the game before she's ready to go inside. 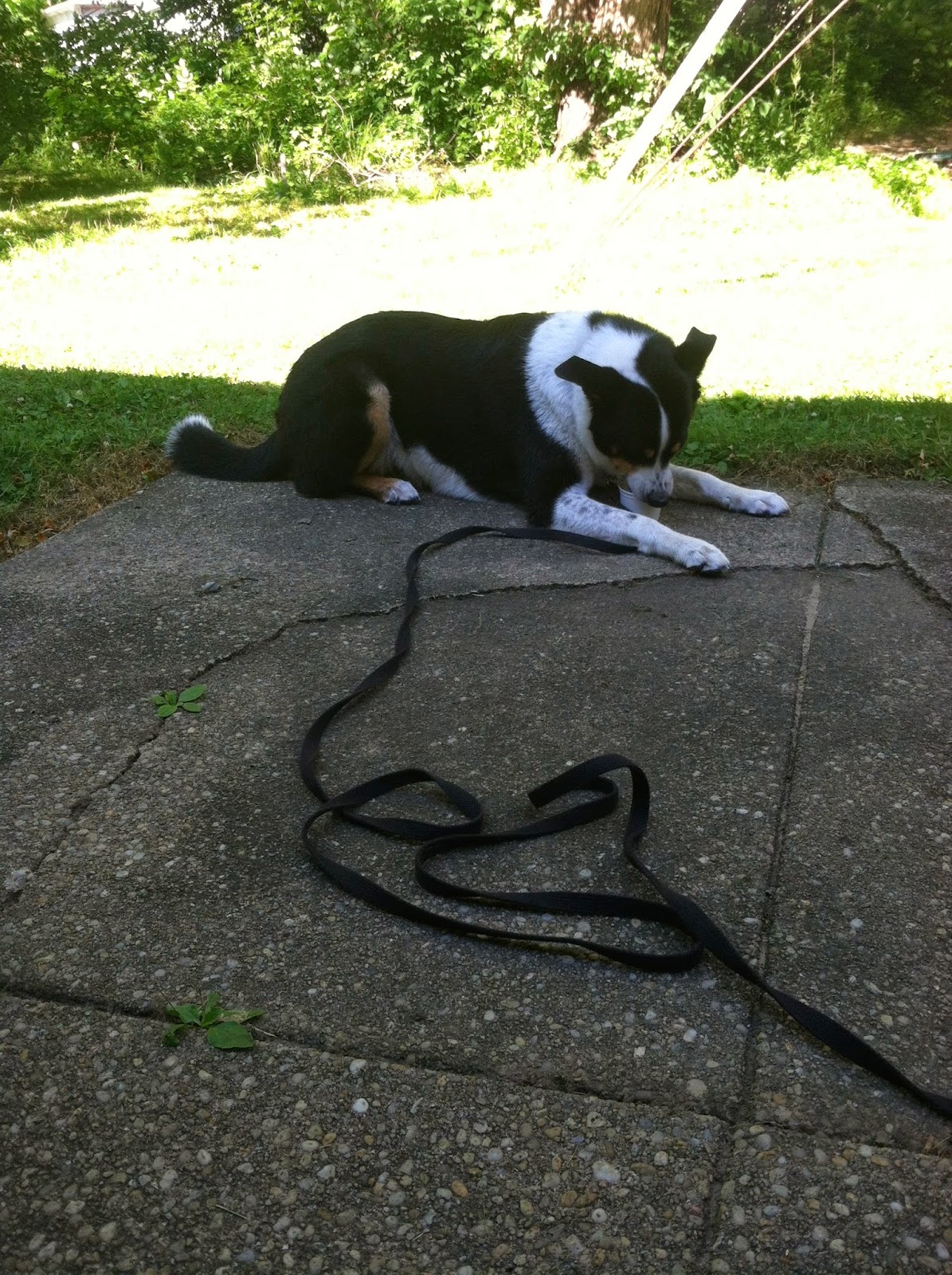 Barley's perfectly content to watch through the window if I want to stay outside a little longer. 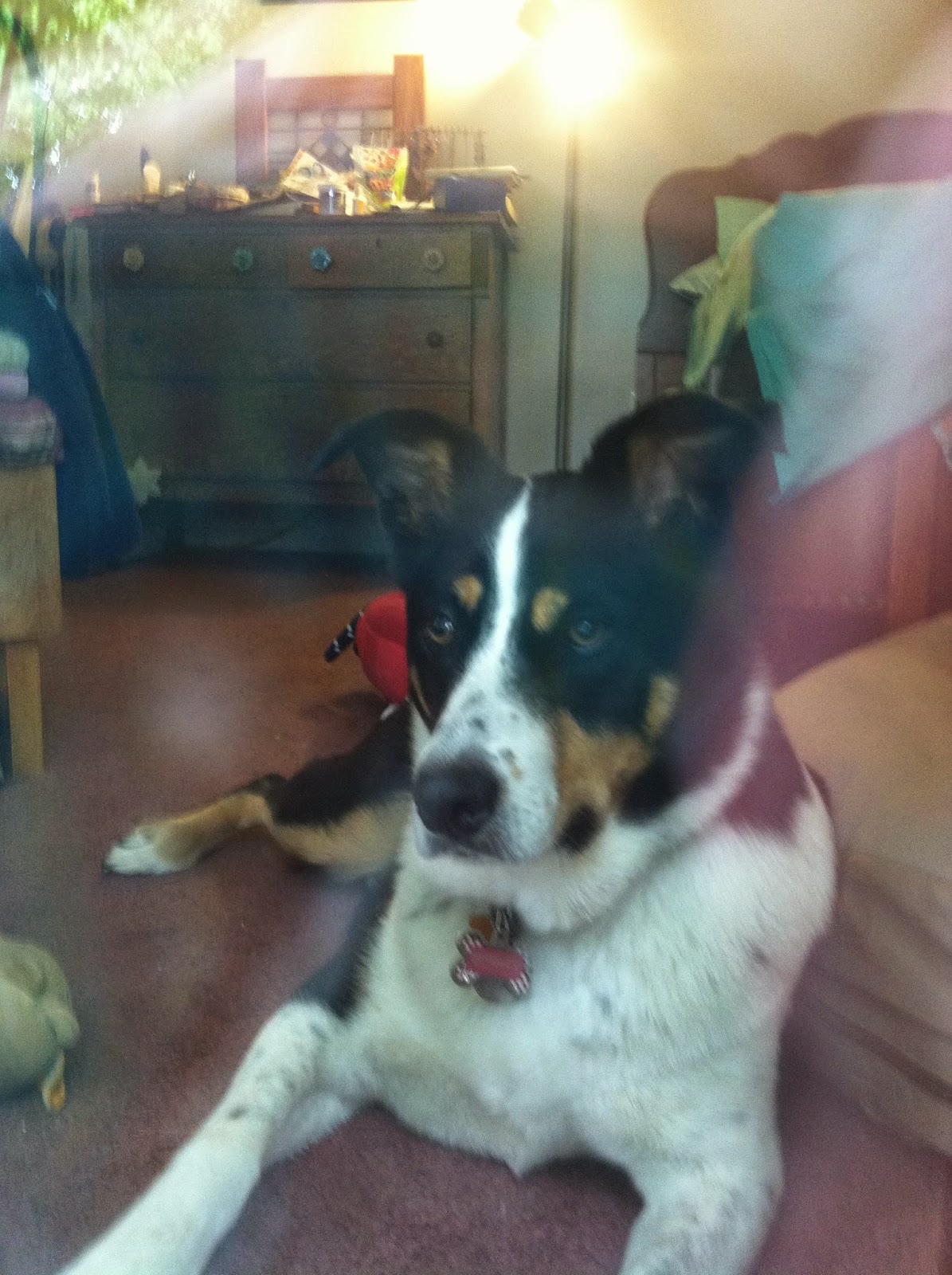 And I can always count on my boy to want to relax and listen to the game with me. 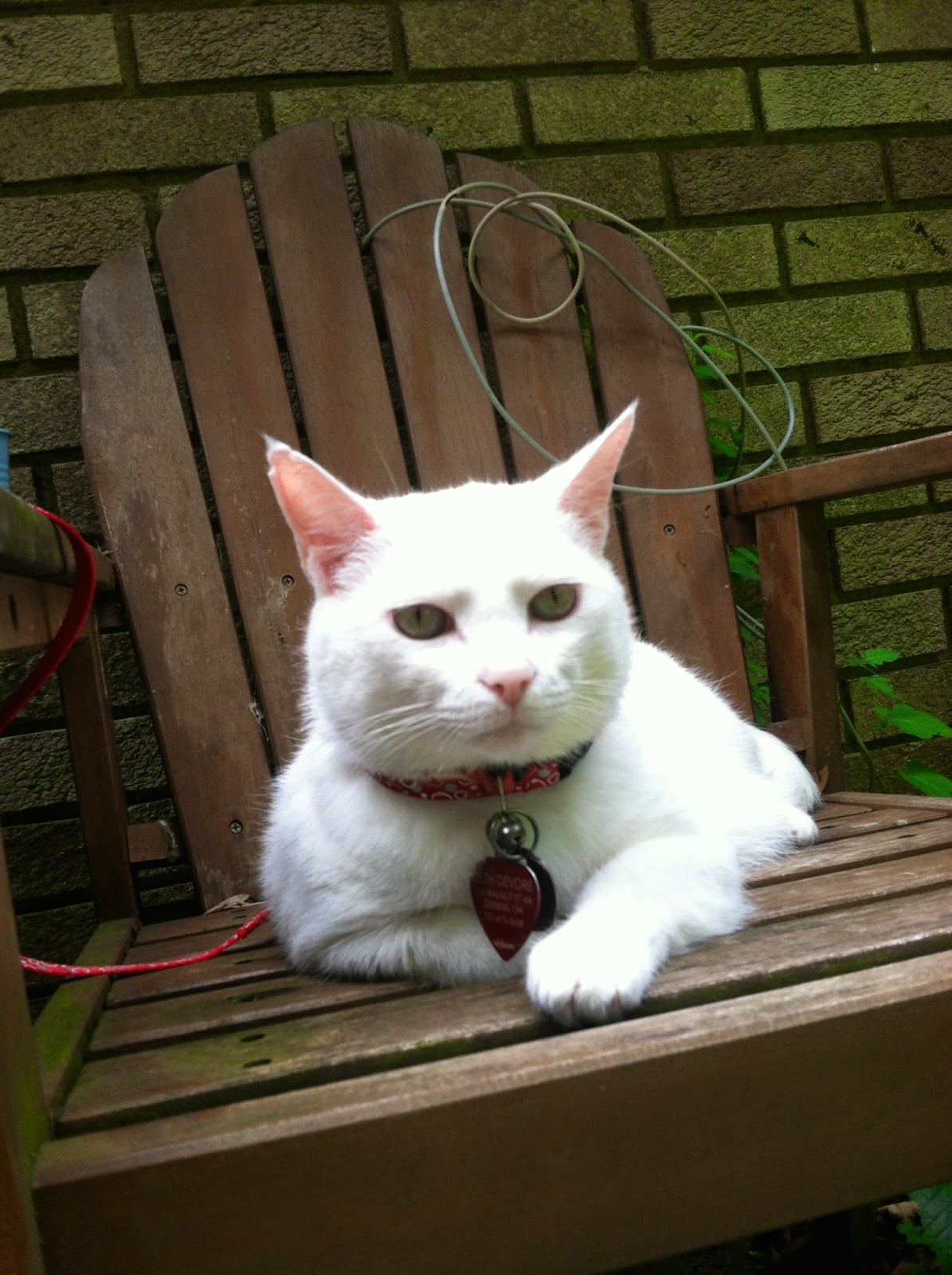 We love that we can have a full day and never be out of a two-mile radius of our front door. We're looking forward to hearing about all of the wonderful ways everyone else has been enjoying their backyards during K9 Kamp.