We're a little late to the party today, but I didn't want to miss out on a chance to share the first installment of our New England adventures, so I figured better late than never!

When we arrived at the cottage I found on VRBO.com, Barley was even more spastic than anticipated. It was drizzling, which she hates. Then the cottage I'm sure had the smells of the past dogs that have visited, so she was running around sniffing like a nut. Then one of the neighbor's dogs (who was very sweet) was running around in the driveway while I unloaded the car, which made Barley crazy as she watched from the floor-to-ceiling windows in the front of the cottage.

Finally, it stopped raining long enough that we could survey the road the cottage was on. It was everything I had hoped it would be: babbling brooks with mini waterfalls along the road, stone walls that inspired me to recite "Mending Wall," and old barns. Perfect. 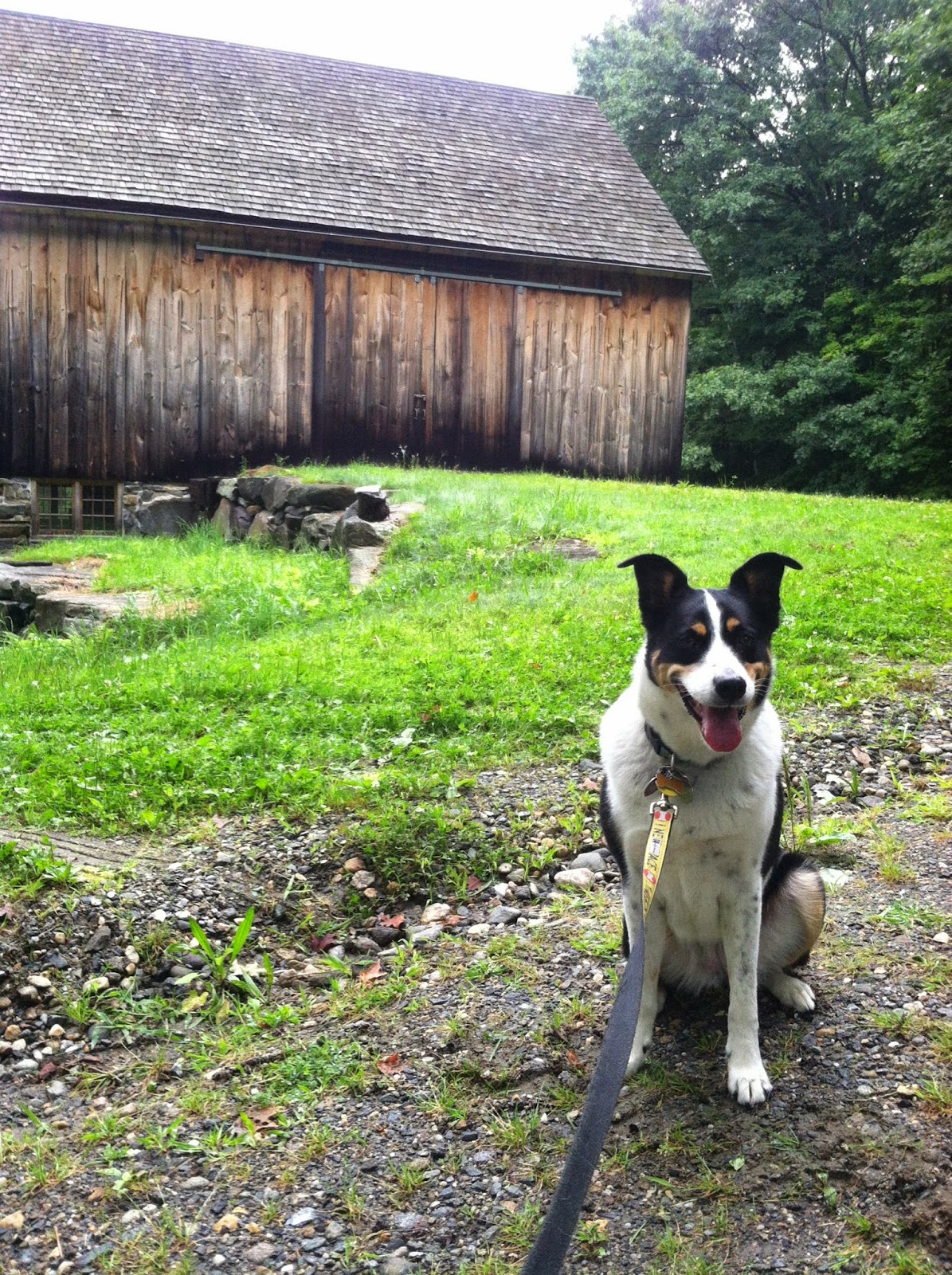 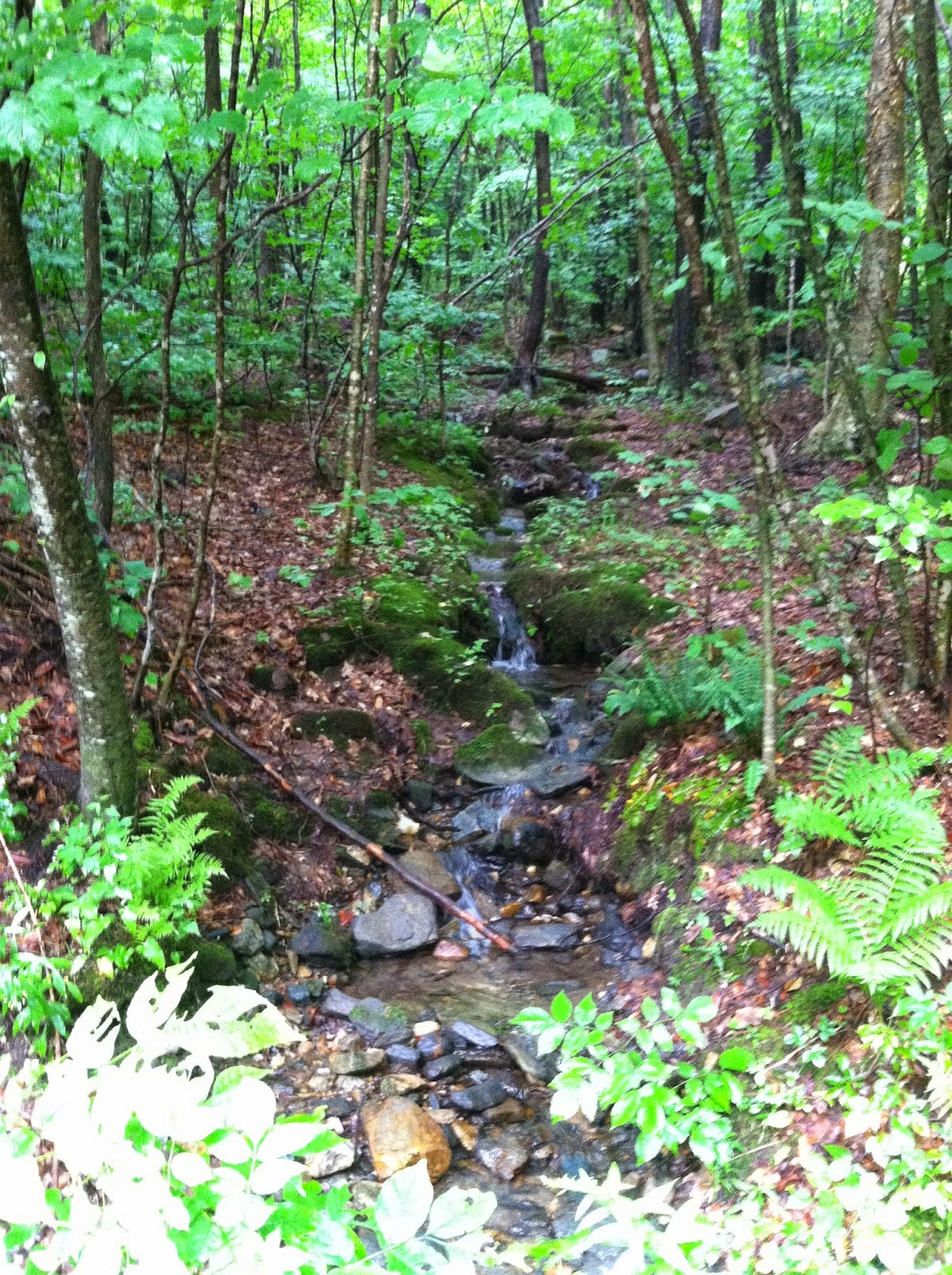 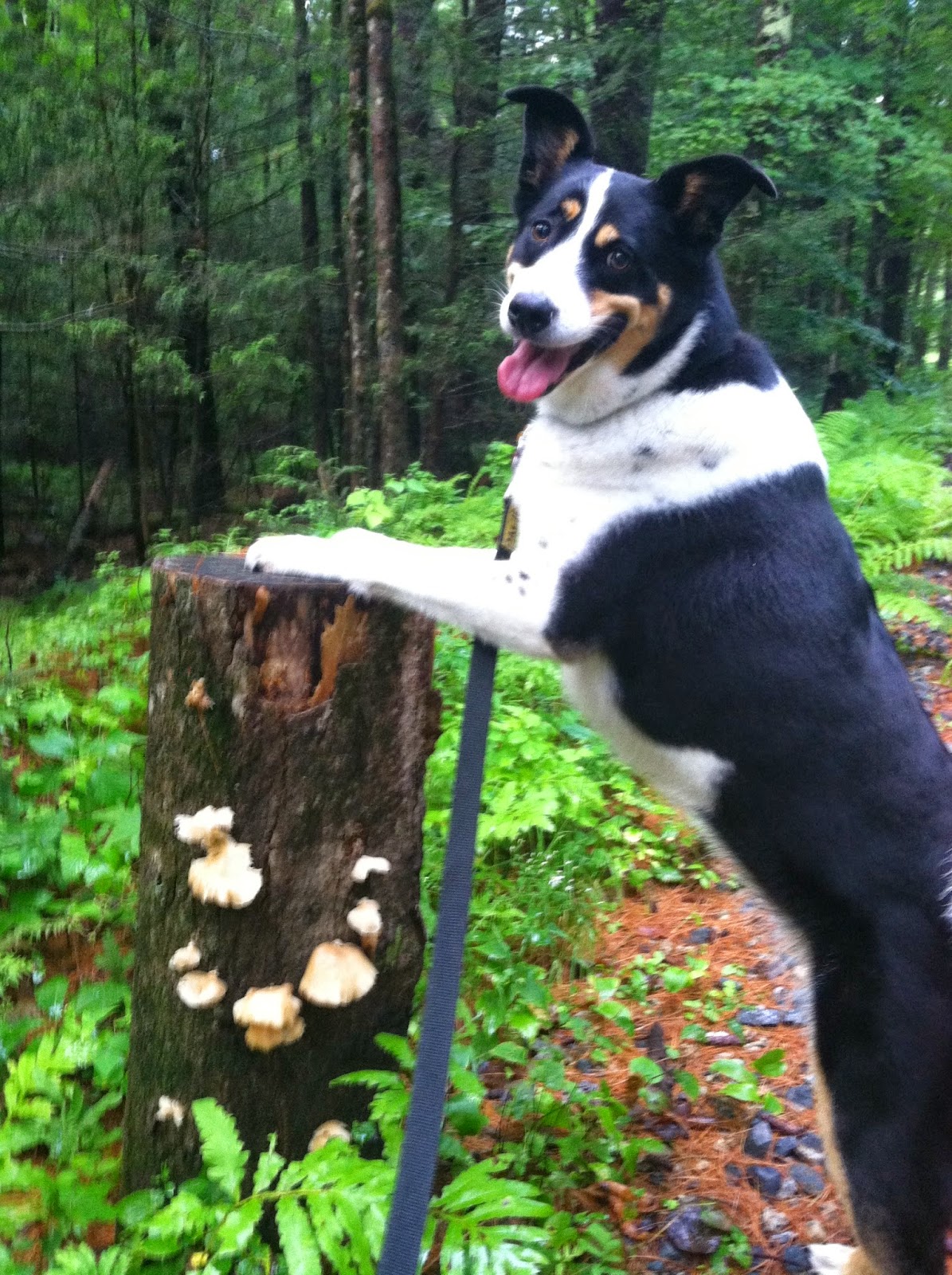 As you might know, I'm obsessed with my Doggin' Cleveland book of dog-friendly hikes in Northeast Ohio. When I found out there was a Doggin' the Berkshires with 33 of the best hikes in the area we'd be staying in, I had to get it. I perused the book through all of the awful, cold, miserable winter months while I planned the trip. Of course, all 33 sounded delightful, but we only had so much time--and I had lots of literary homes I wanted to visit, too. I eventually narrowed it down to the fifteen most interesting--still too many to cover in one visit, but it gave me a starting point and we narrowed down from there based on how far away parks were, the weather, and how much time we had for hiking.

Here's an overview of the first three parks we tried out. Stay tuned next week for part 2 of our adventures!

Field Farm (#13)
This park was about an hour from the cottage we rented and promised great views "of the Taconic Range to the west and Mount Greylock to the east." Of course, I'm directionally challenged and unless I can figure out where I am in relation to Lake Erie, I can't figure out which direction is which. Since Lake Erie isn't anywhere close to us, I can't even begin to tell you which mountains are which, but the views were spectacular. 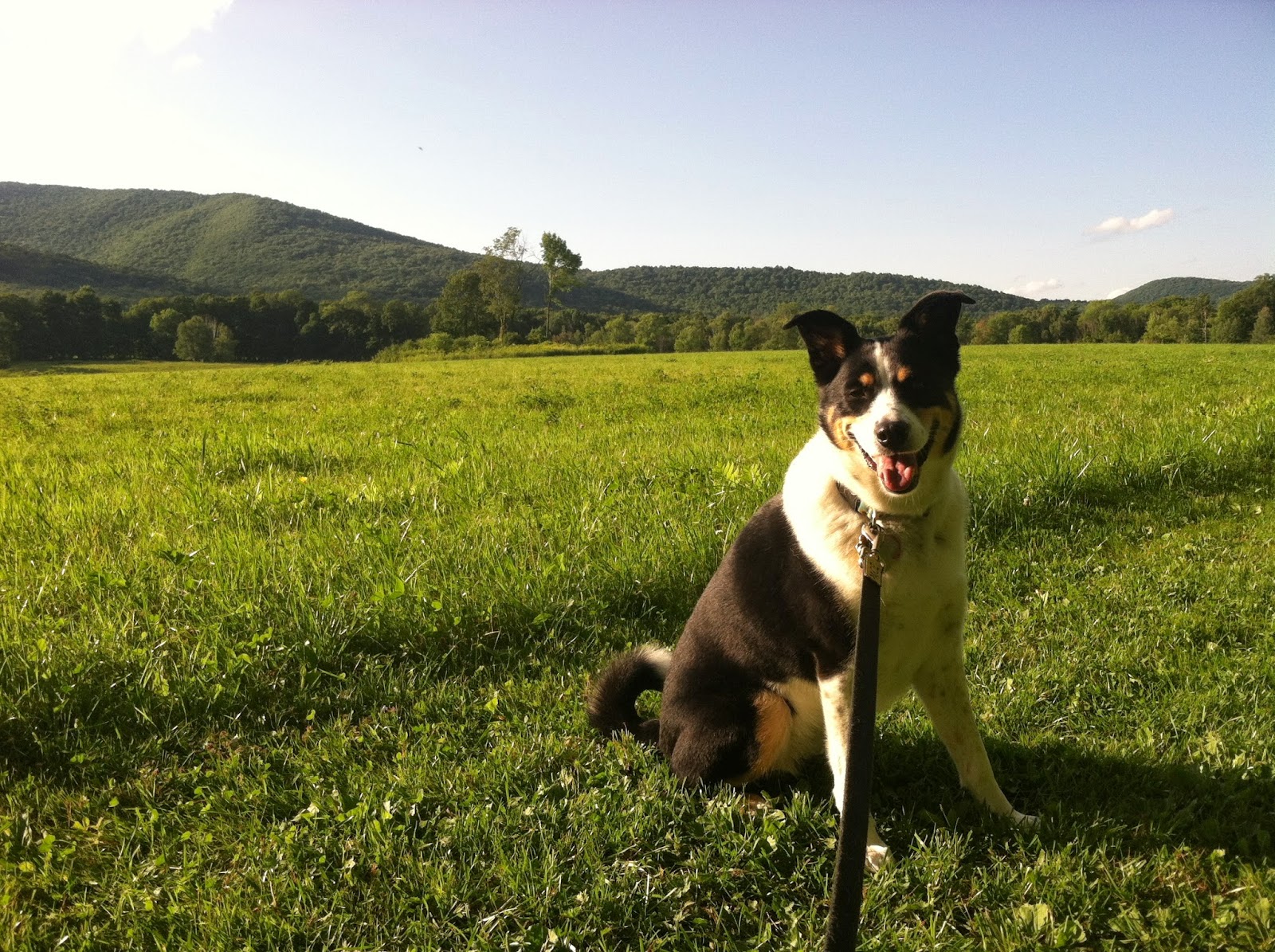 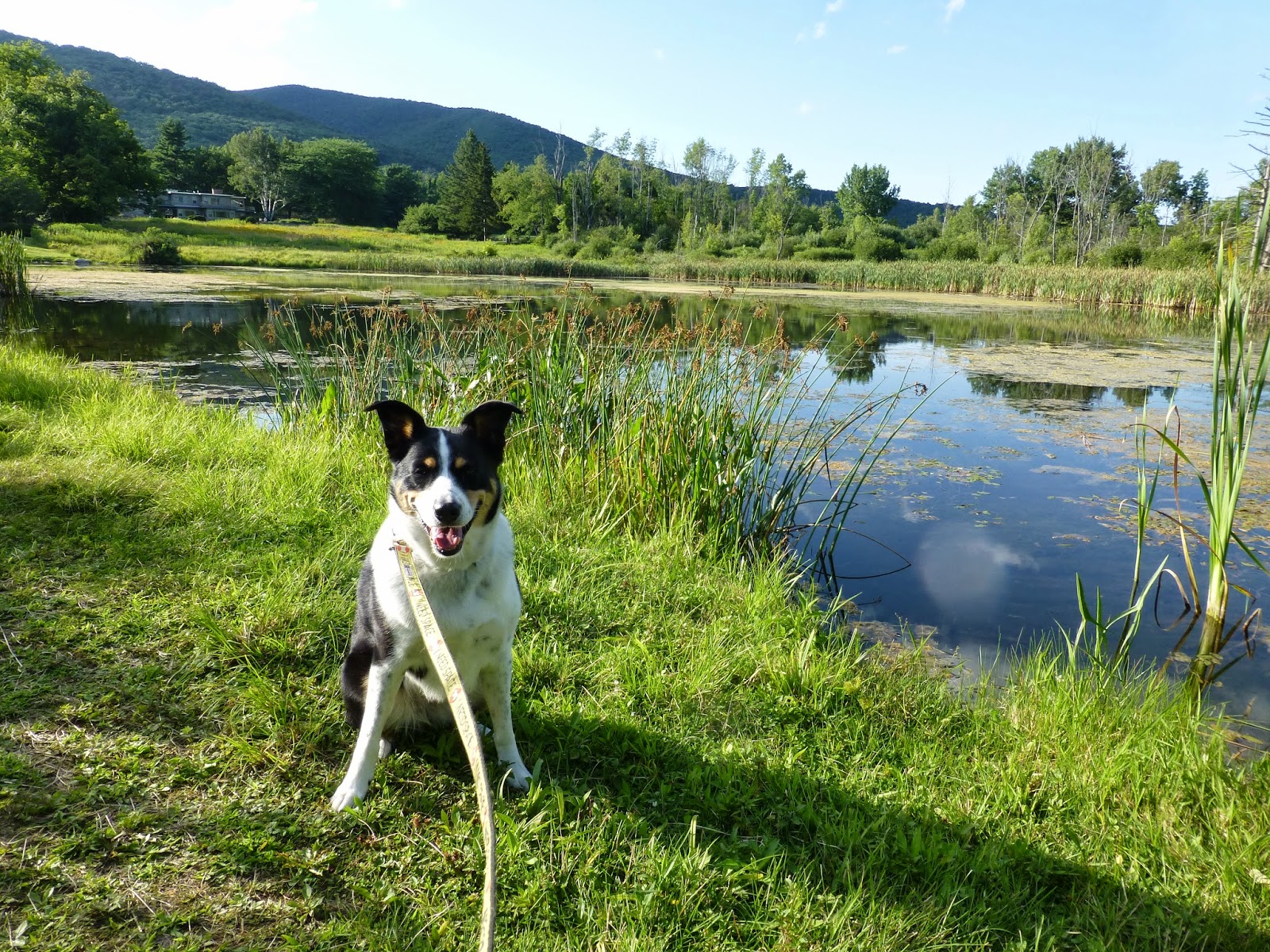 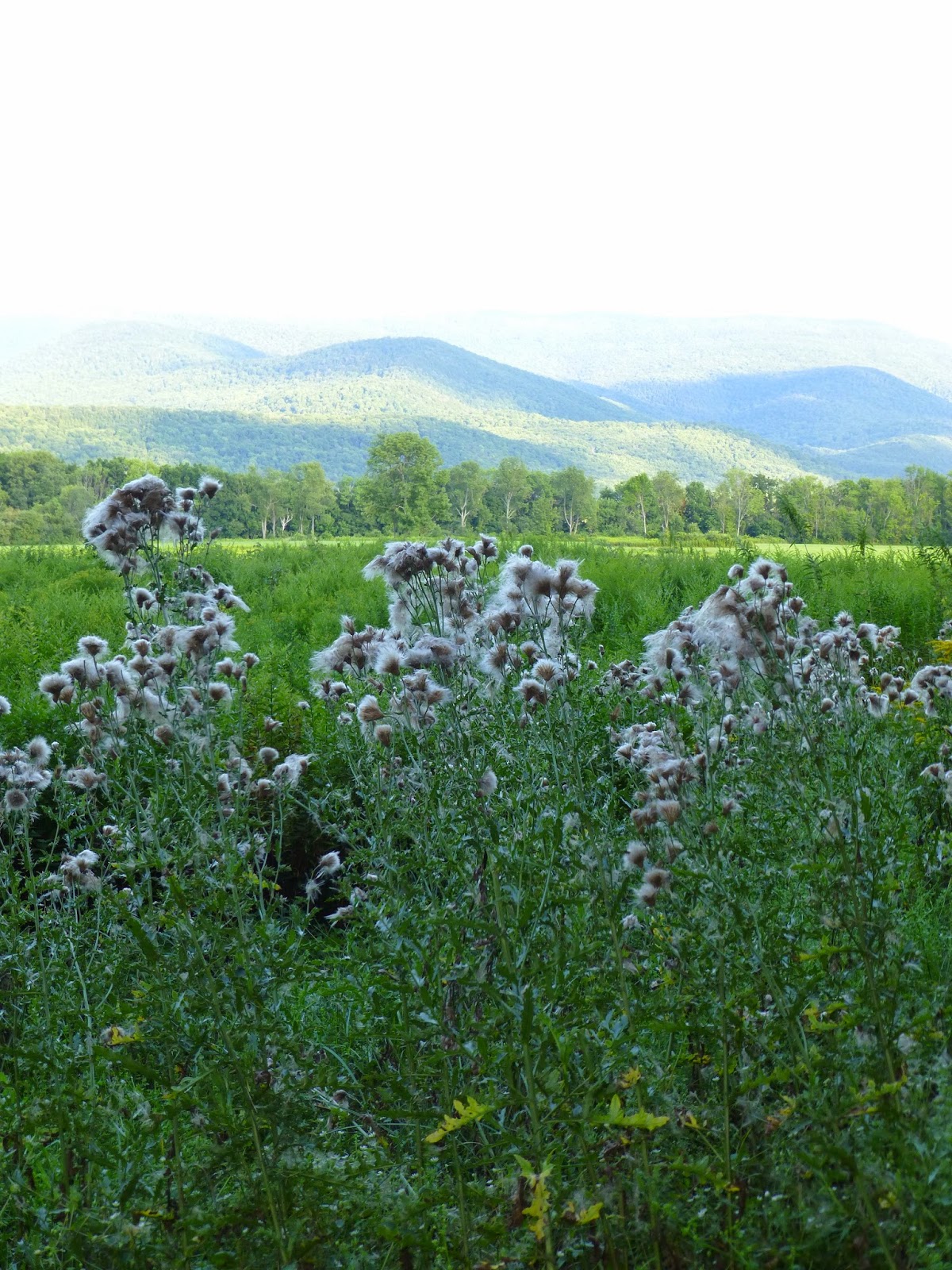 Another draw of Field Farm were the sculptures that were around the Guest House. Most of them weren't really my kind of art, but I always enjoy looking at art whether I "get it" or not. There was a nude statue that really freaked Barley out. She had no idea what to make of it--she stopped in her tracks and then proceeded to border collie stare the statue as she walked ALL the way around it. 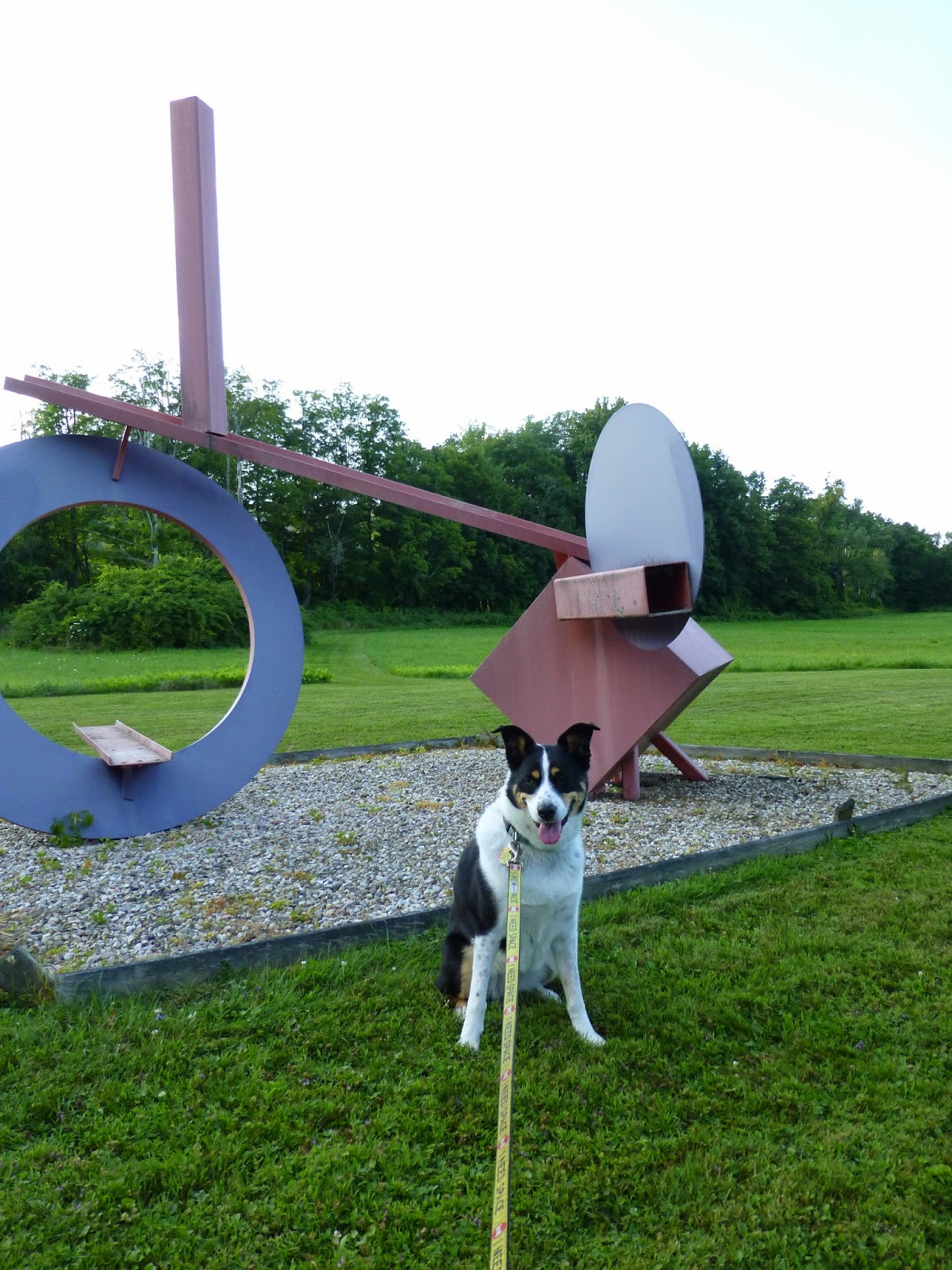 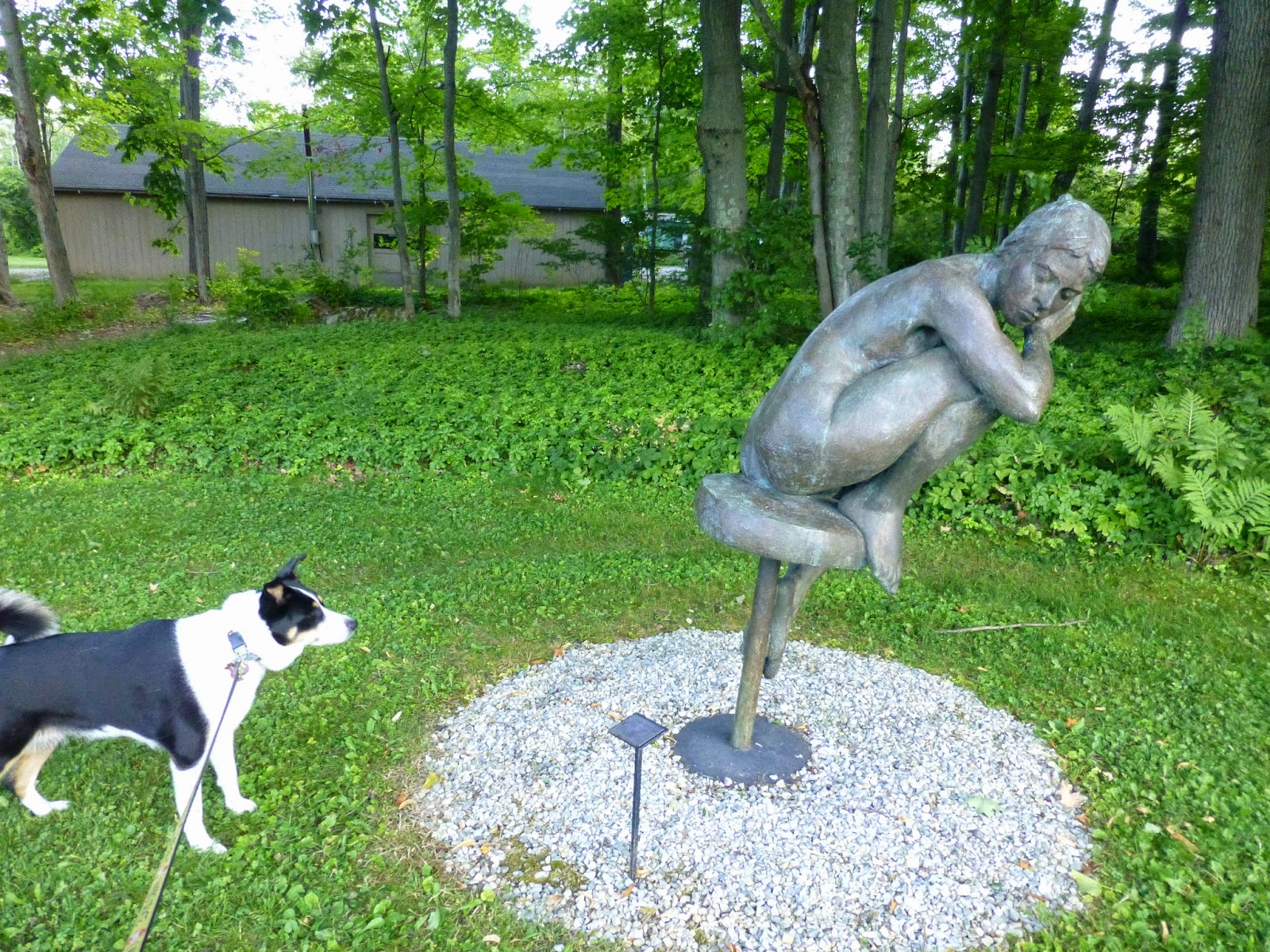 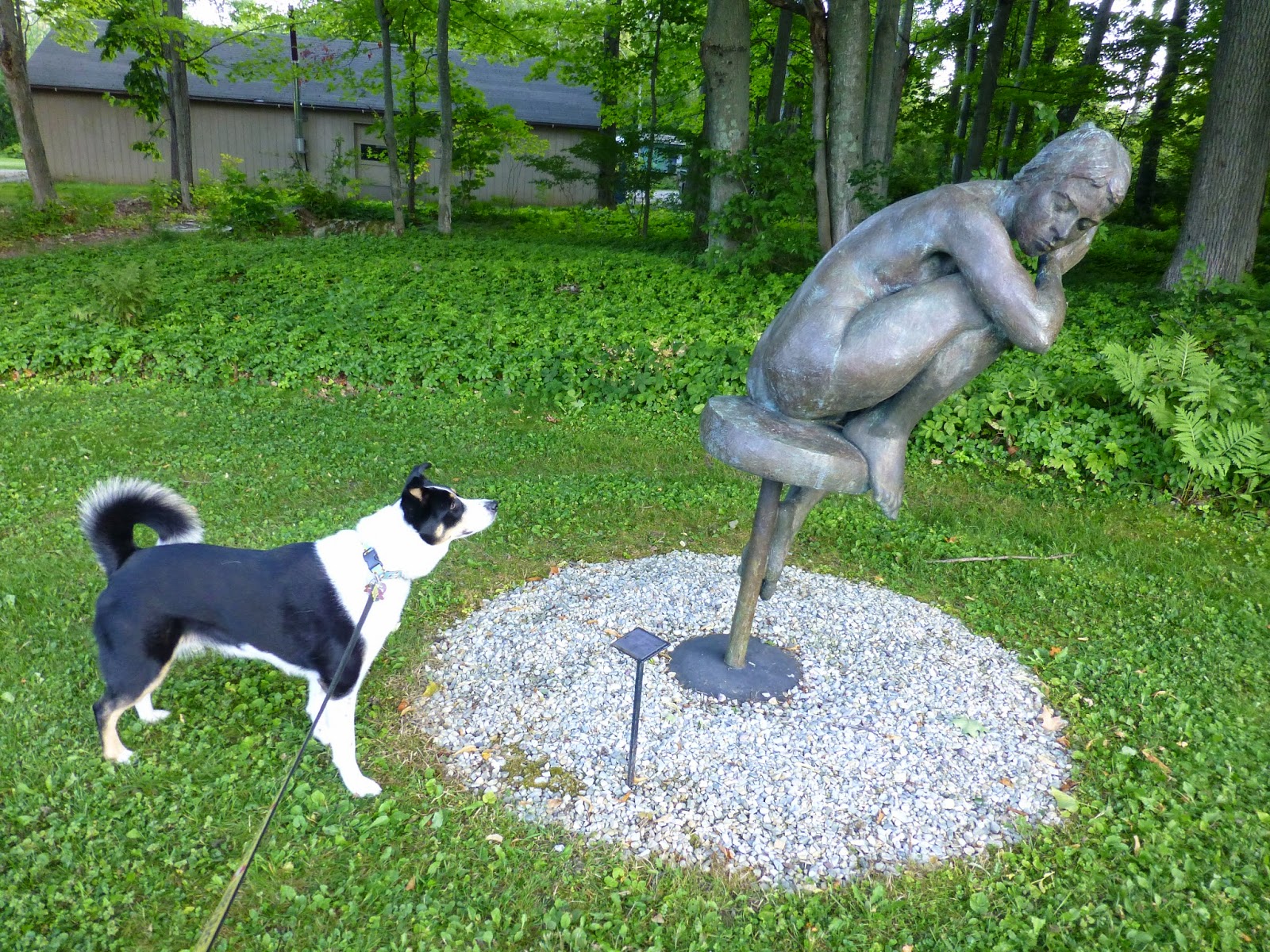 We pieced together several parts of several different trails and got in a nice 2+ mile walk. The best part of this walk was that it was flat! The road our cottage was on was very hilly and my legs do not like that kind of workout!

Natural Bridge State Park (#31)
The Natural Bridge State Park was one of the closest to our cottage and it just sounded like something that would be neat to see. The cool thing here is all of the marble. There's a marble dam, which, according to Doggin' the Berkshires, is the only natural marble dam in the country. There's also a natural marble bridge, which I think is the arch thing in the last picture from here, but there were lots of wire fences (thank goodness because I do not like heights!) that made it hard to get a really good look at it--the sign that said natural bridge had an arrow that pointed down a staircase that dead ended at the arch thing, though, so I assume it's the bridge. There was a sculpture garden here, too, with sculptures I could at least sometimes understand (or at least identify what they were). 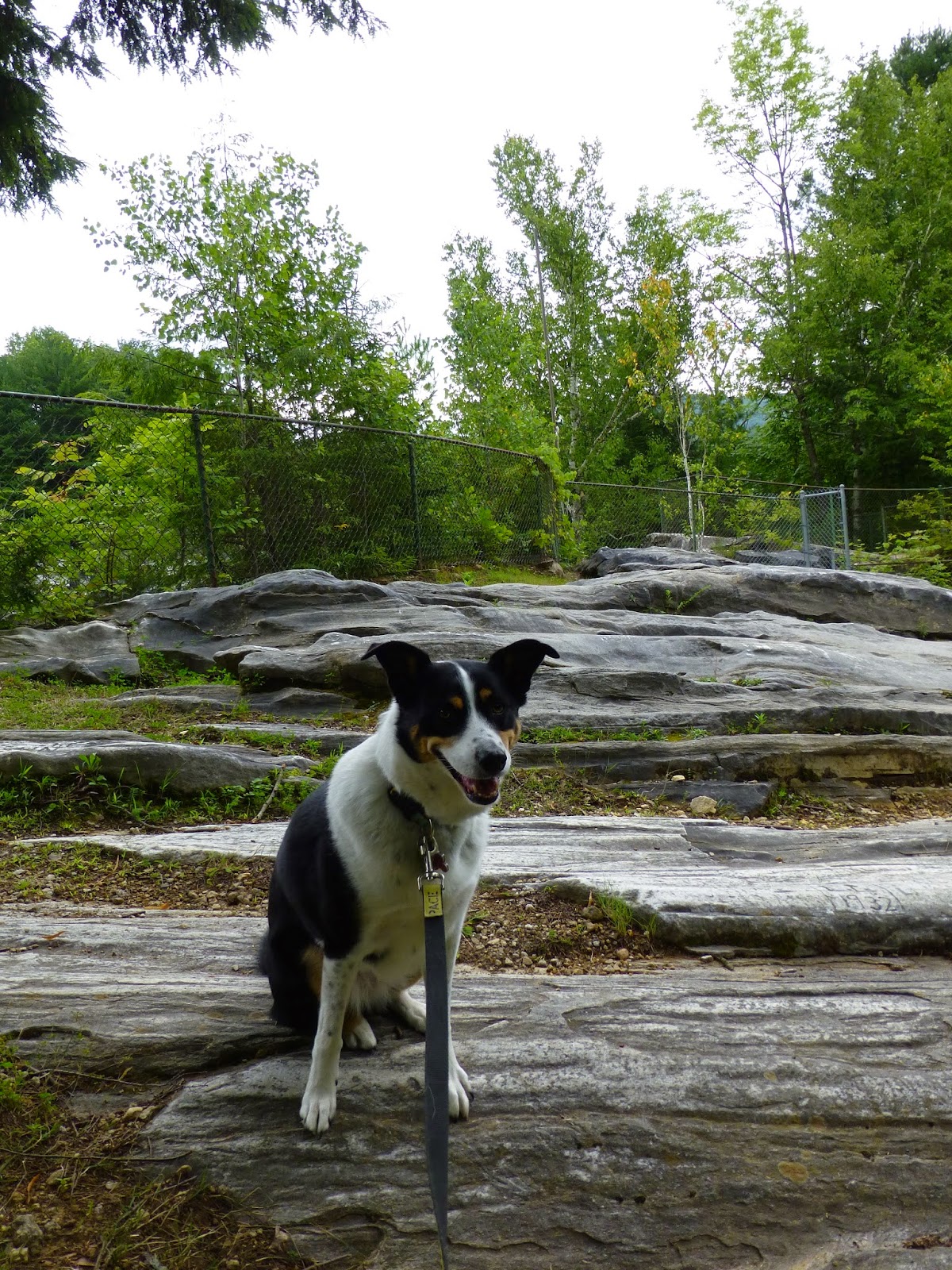 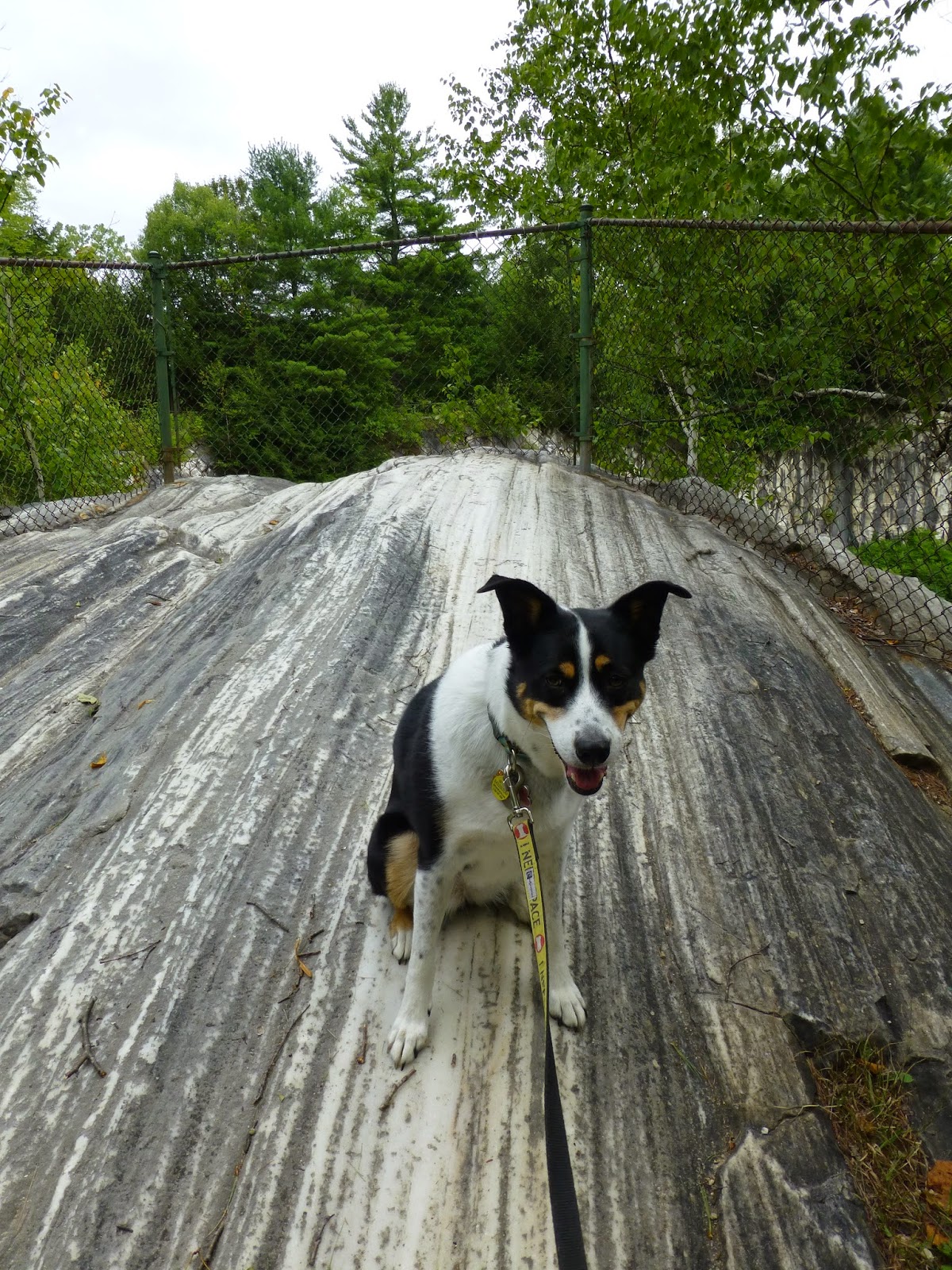 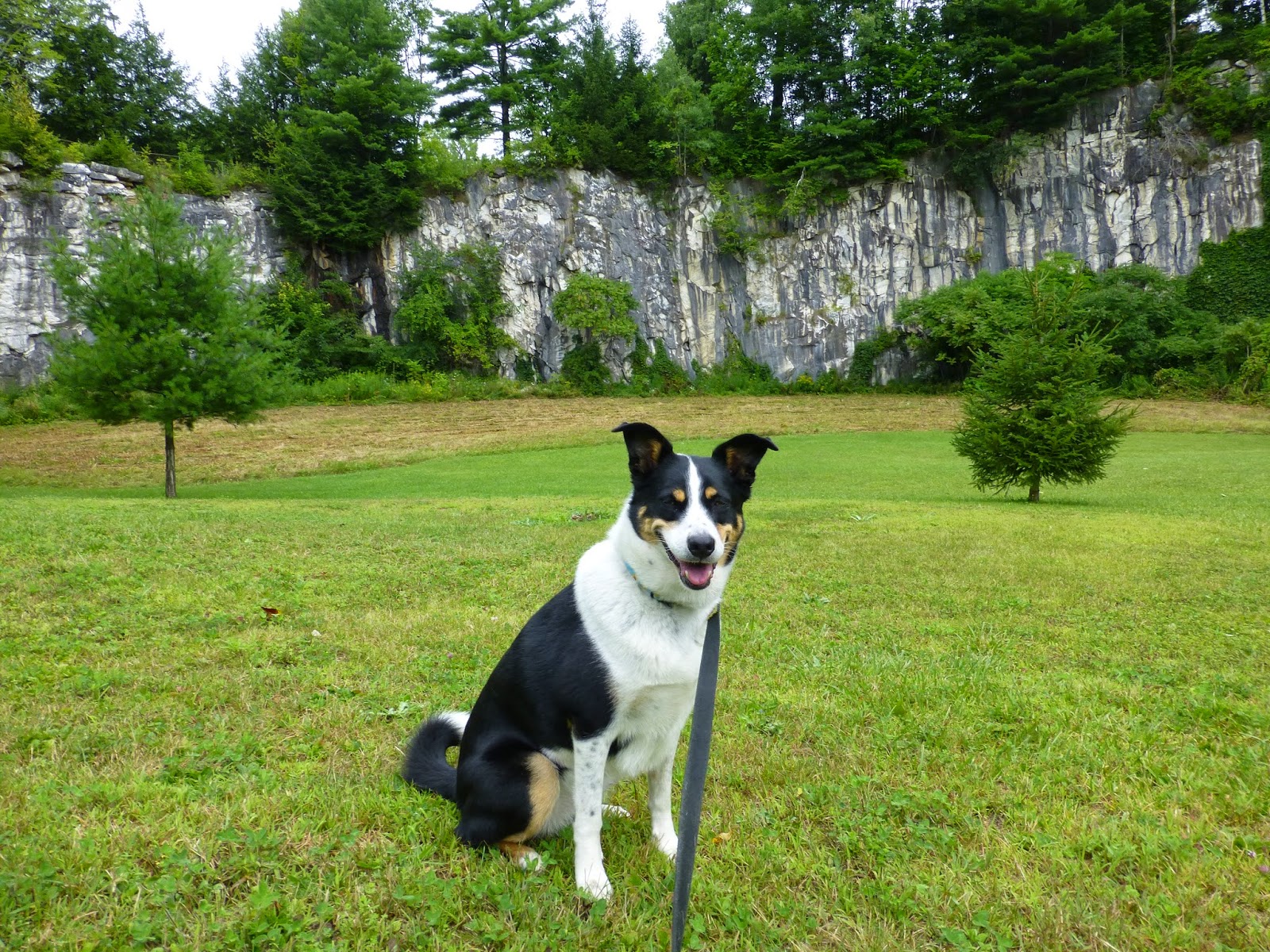 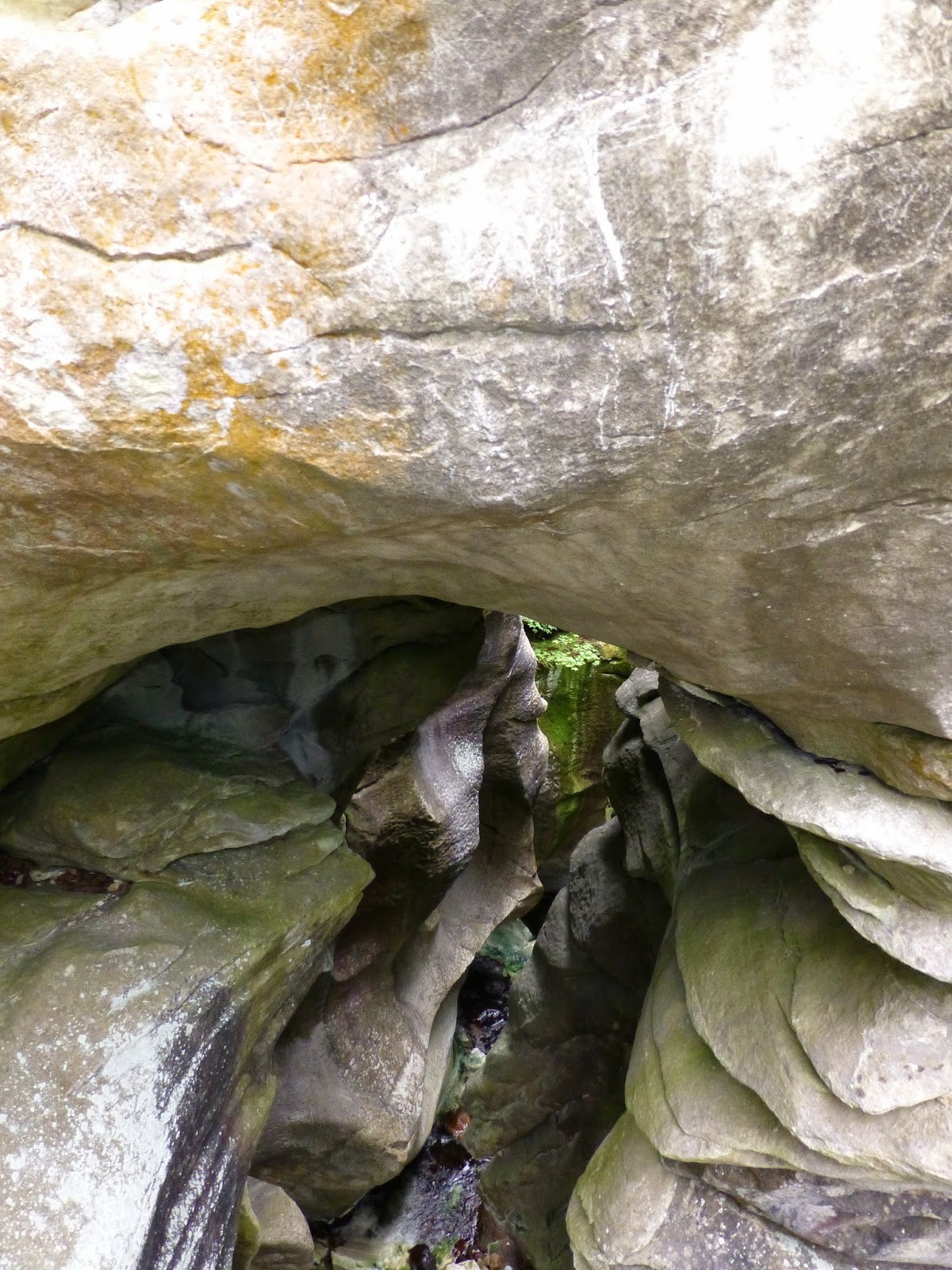 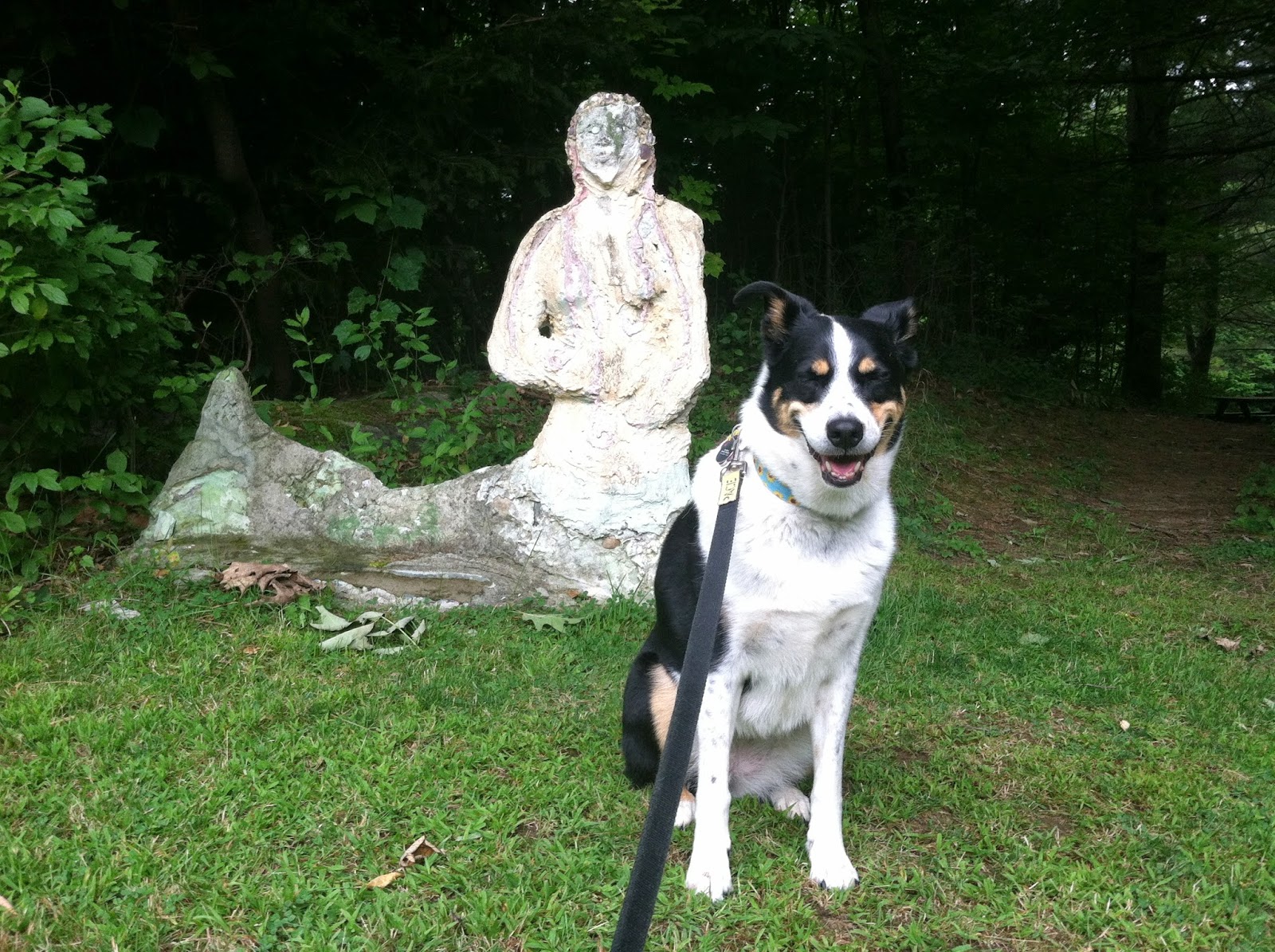 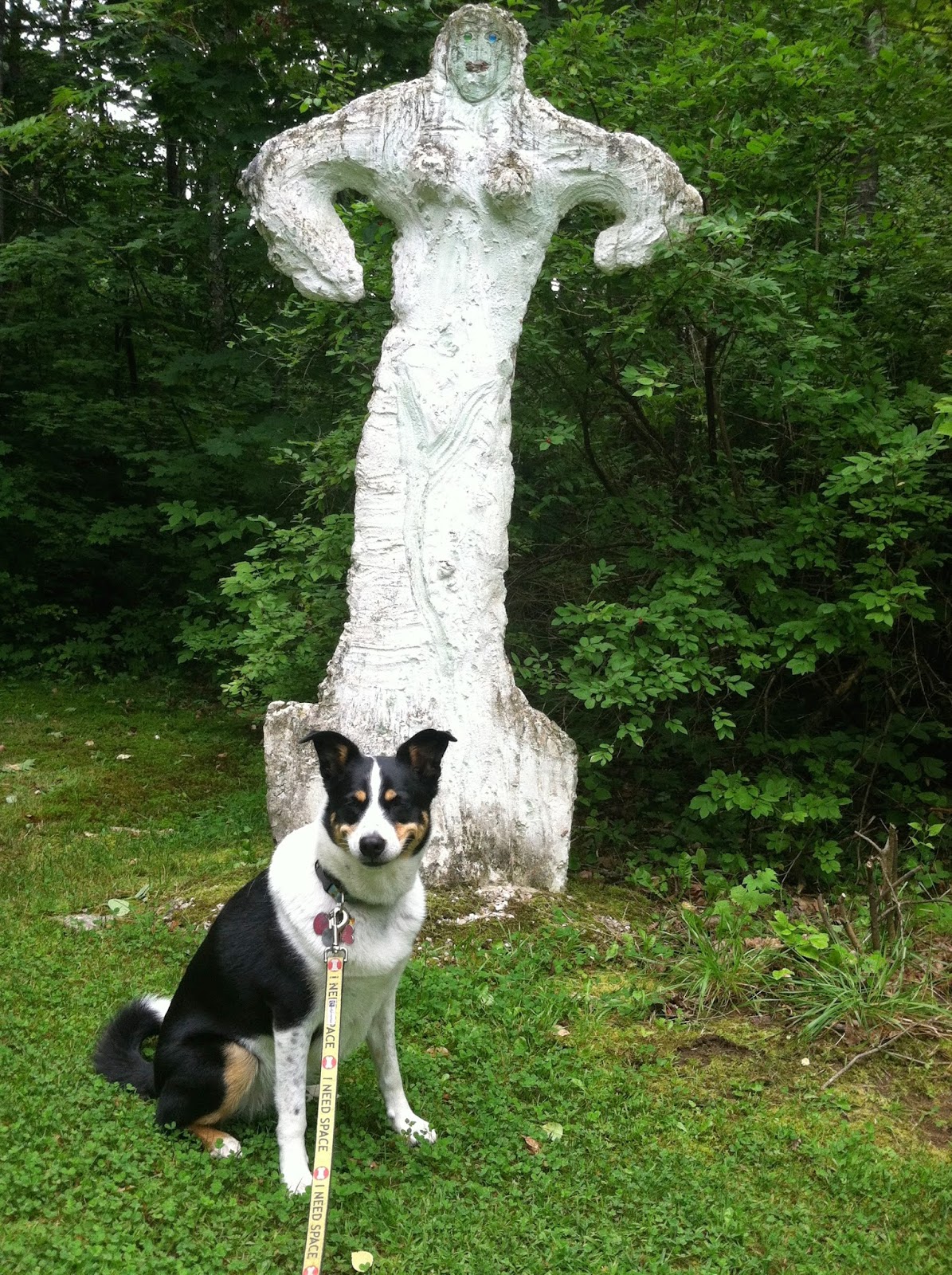 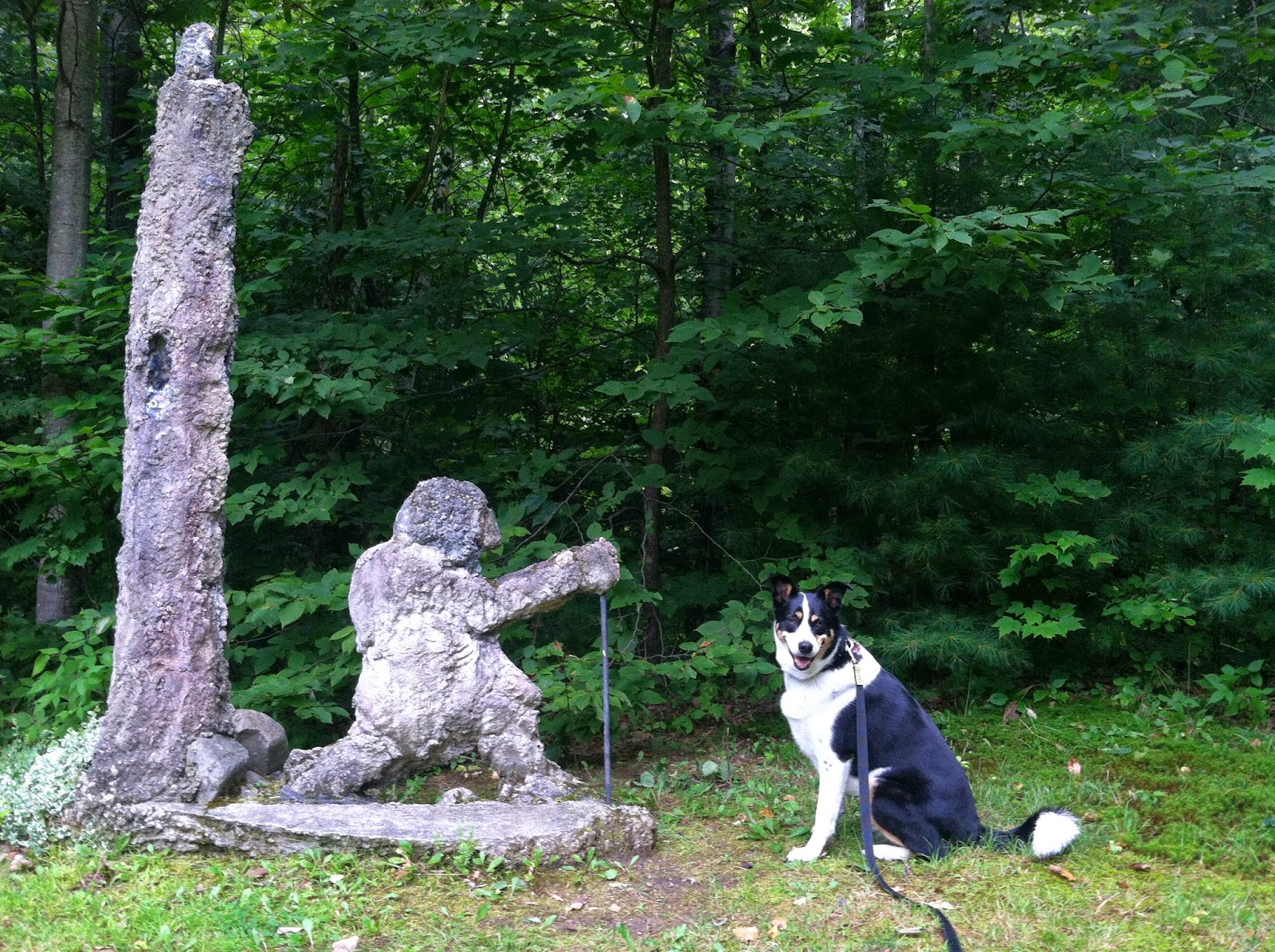 The trails here were very, very short, so we only got .51 miles all together here, but the marble was really cool--although on our way out of the park we did see another trail into the wood that supposedly was another .5-miles long.

Sheep Hill (#20)
We passed Sheep Hill on our way to Field Farm and it wasn't too far past the sign for the Natural Bridge, so we decided to check it out after visiting the Natural Bridge to get a little more mileage in. Unfortunately, it started drizzling right as we pulled into the parking lot. It wasn't a heavy rain, though, so I decided we'd at least get a little bit of a walk in. The trail we chose wasn't long, but it was intense! We took one of the connector trails back to the car when the drizzle got a little heavier, so we only made it .82 miles, but it was a work out! We paused several times so I could catch my breath Barley could look down and check on the car way down at the bottom of the hill. Even with the haziness, the views were still beautiful. It was worth the burning in my legs and lungs! 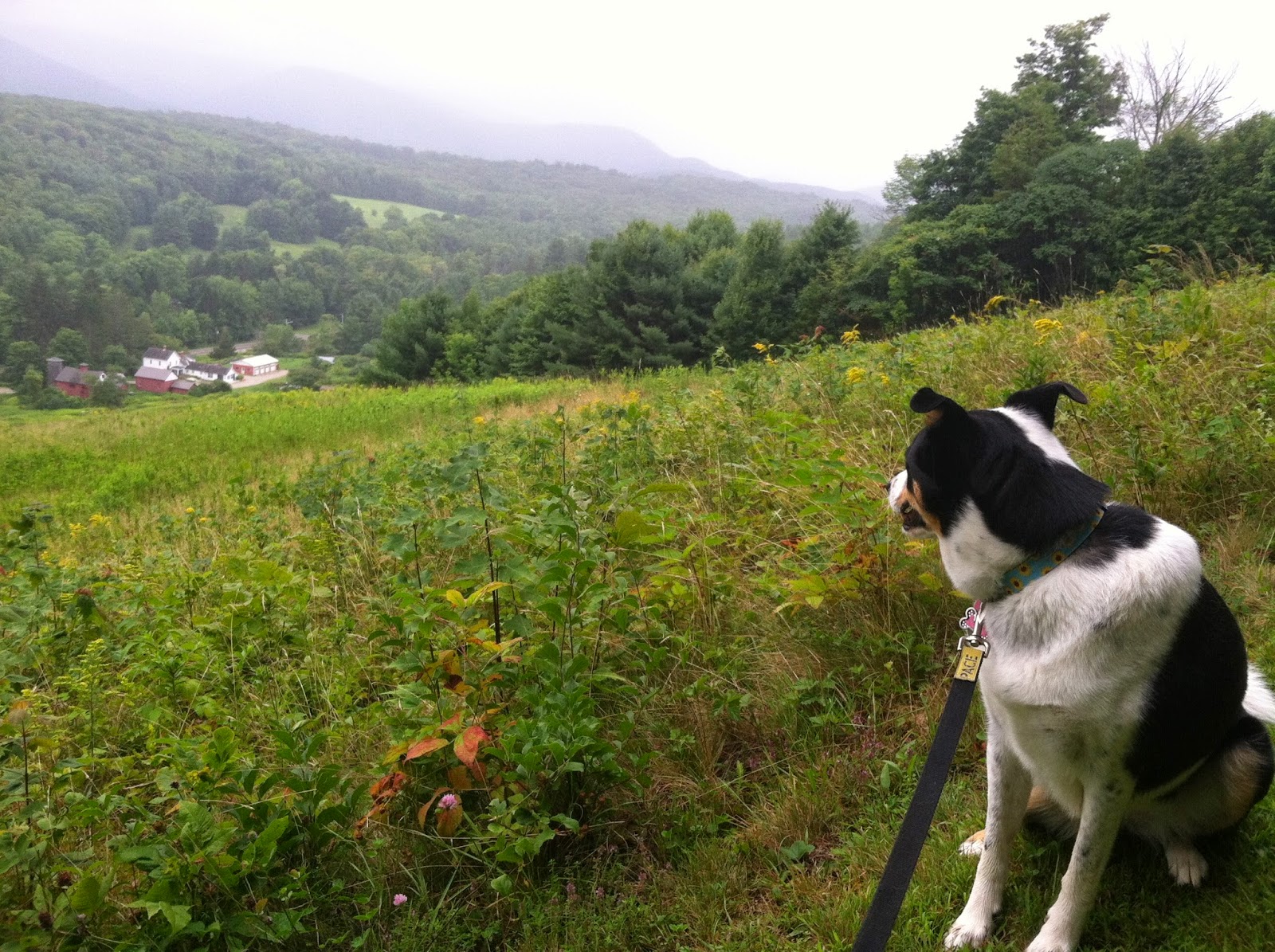 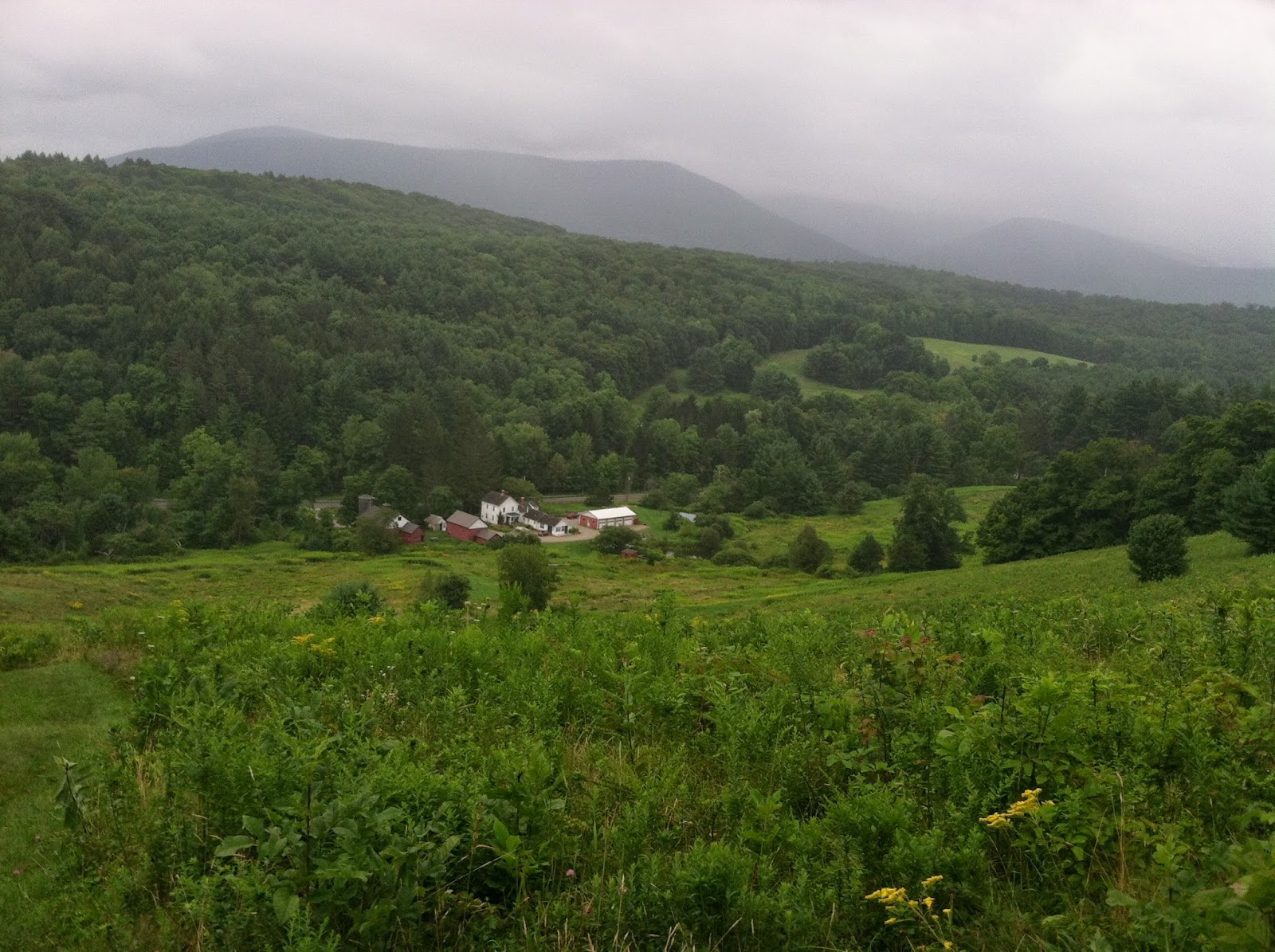 Soth also embraced vacation. The windows in the front of the cottage that made Barley crazy made my sweet boy perfectly content. 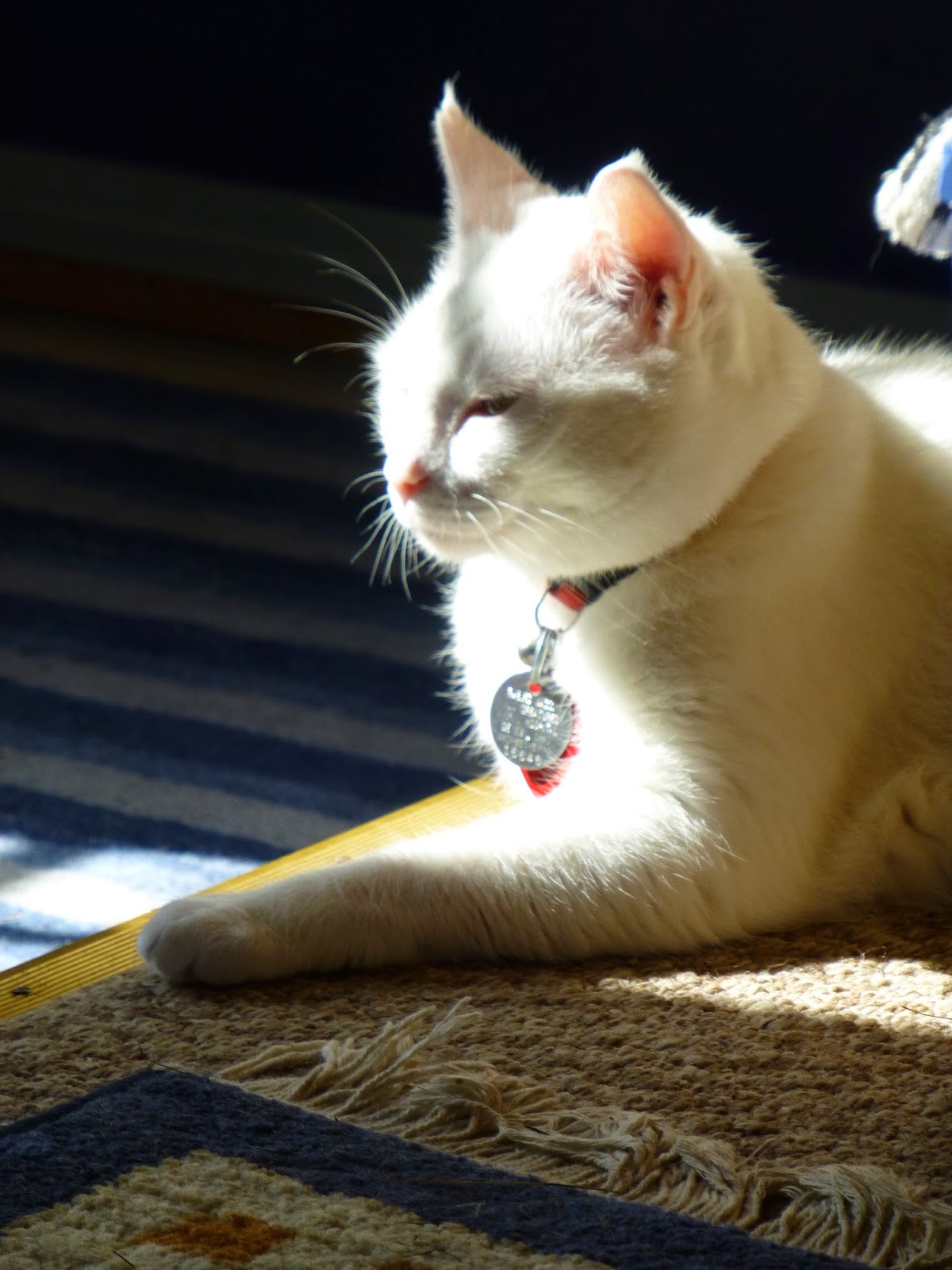 Check in next week when we follow up on the remaining trails we tried out!