We've been MIA for a couple weeks--mostly because we were visiting my parents and booting up my old computer that lives at their house fore the rare occasion I get lesson planning done on visits seemed too much trouble, but also because my parents' don't live in a particularly dog-friendly place, so Barley and I didn't spend much time adventuring.

This was Barley's first experience with a southern summer and if I needed any confirmation that my girl is a snow puppy, I got it on this trip. There were several days in the 90s and at least once I looked at my phone and it told me there was 96% humidity! Even though I lived in the south for the first 23 years of my life, I'm not cut out for that life anymore. Barley and I enjoyed slowing down and basking in the A/C for a while.

Soth, on the other hand, figured out my parents' dog door and made several jail break attempts until we closed off the dog door for the rest of our visit. Being the paranoid pet mama that I am, I was certain he was going to get carried away by the two hawks who were hanging out in my parents' yard during the entire two weeks we were there. (Maybe, just maybe, I've watched The Proposal one too many times.)

I did periodically take him out on the porch with me so he could watch birds while I read. (If you like mystery novels and like novels narrated by dogs, I highly recommend Spencer Quinn's Chet and Bernie mystery series--they are silly and not "great" literature, but they are certainly fun!) Barley also enjoyed a little porch sittin' during our stay, too. She wasn't interested in going down to the dog run to romp (and since I worked up a sweat just turning a page in my book, who could blame her), but she spent a lot of time sitting on the porch border collie staring the squirrels. 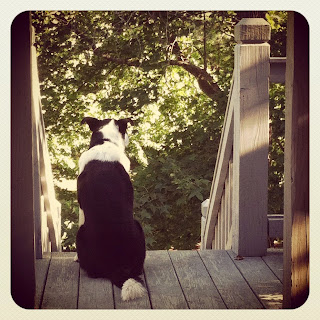 Since there are only a couple trails dogs are allowed on near my parents' place, most of my adventures were without the pup. My family humored me and visited a big cat sanctuary I'd seen a sign for on my way to their house. They also had some bears, wolves, and other animals that were interesting to see. My favorite was a white tiger named Aurora who looked like Soth if he were part of the Honey, I Blew Up the Kids cast.

Noccalula Falls is near the sanctuary--the trails aren't dog friendly, so since we were out there without the pups, we detoured on the way home so we could visit the falls and see the rest of the park. 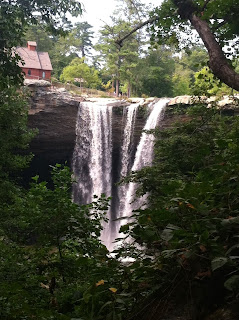 We walked through most of the park, but hopped on the train to get the full Noccalula experience. My sister and I picked the back row of one car and ended up having to talk to small children from the row in front of us the entire ride. (For those of you who are good with children, what is the appropriate response when a small child smiles at you with at least 6 silver teeth and says, "My teeth are silver." All I could think of was "Wow! They're shiny." She seemed pleased.)


We also took a day trip to Huntsville for my dad's early birthday celebration. We visited the Space and Rocket Center where we fell in love with Miss Baker, one of the monkeys sent into space, and visited her grave. I was a little disappointed that the only mention we found of Laika the dog was a stuffed toy in the gift shop (that I was thisclose to buying), but it was a great place with a lot of interesting exhibits. 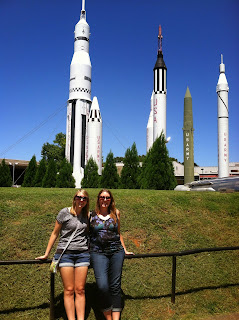 I also got to crawl into a space capsule--it wasn't significantly smaller than the driver's side of my adorable little Juke, but it was significantly harder to get out of in a lady-like fashion. 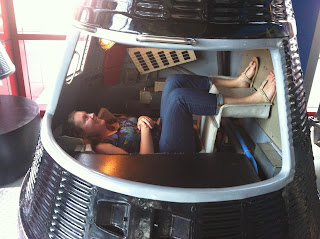 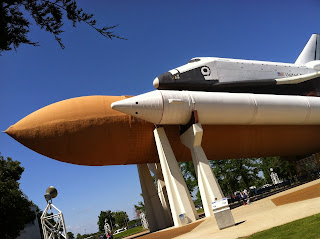 We also made a post-museum visit to the Straight to Ale brewery where we continued our celebration of Miss Baker (and Dad's birthday) with a Monkeynaut IPA. 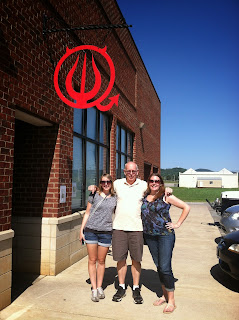 Straight to Ale had a Laika-inspired beer, but they only had it in $10 bottles--and after splitting a tasting tray with my dad and sister and drinking a pint of Hell or Rye Water, I couldn't justify drinking a $10 bottle of beer on top of that, so I settled for a picture of the label. 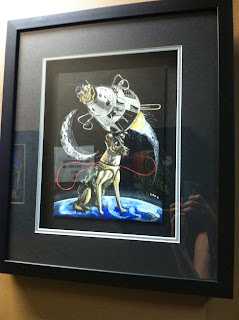 During our time away from home, we managed to meet our 3-mile a day goal all but 2 days (and made up for those on other days). I'd like to give a big shout out to my mom and sister who were willing to leave the house early each morning and more incredibly leash up their pups and grab a flashlight every night to walk in the dark when it was cool enough for Barley to enjoy her stroll. Total July Miles: 118.49 Total Yearly Miles (as of 8/7/14): 643.96

Now that we're home again, it's time to make the packing list for our final adventures of the summer (I can't believe school starts back in less than 3 weeks!)--and we need your help!

Barley, Soth, and I are going on our first vacation and I want to be sure I have everything we're going to need! I've booked a dog friendly cottage in western Massachusetts so that I can visit Emily Dickinson's house, Barley and I can hike in the footsteps of Melville, Hawthorne, Thoreau, and Emerson, and Soth can see a bird and chuckle (which he does daily at home--but he can't be left out of the literary adventure!). This is the first time I've traveled with the best to somewhere that wasn't my parent's house where they have extras of anything we might forget and are 10 minutes from Petsmart if we need something special.

Soth is easy. He's stayed in several hotels before on our cross-country move, so I know that he's content as long as he has food, a litter box, a window to look out of, and a bed to snuggle with me in at the end of the day. Plus, this place has a screened in catio he can use, so he'll be in Heaven.

Barley, on the other hand, comes with a lot of stuff. (I do not envy anyone who has to carry a diaper bag on a daily basis--packing for the one trip is causing me more than enough anxiety, so I can't imagine dealing with it every day!) Here's our list so far:

What else do we need? What are you essential travel items when traveling with your pets to keep them healthy and happy? As excited as I am for our adventures, I'm equally freaking out that I might forget some essential item and add extra stress to the trip when I have to figure out a back up plan.

We're linking up for FitDog Friday and can't wait to catch up on all of the posts we've missed the last couple weeks!