The English Festival last Friday was a huge success and worth all of the stress--thank you all for the good vibes you sent my way! Our walking week got off to a slow start, though. As soon as the Festival was over, I had to rush home to get Soth to the vet for his checkup and vaccinations. I took Barley out for a quick mile-loop around the neighborhood, and then we snuggled up for the rest of the evening.

The weather hasn't been great here this week--the sunny days have been insanely cold, the warmer days have been rainy--but we've logged 25.54 miles this week and got to visit three different parks this week.

Geneva State Park
We got to spend some time at our closest park while I satisfied my donut craving. The skies were beautifully blue and the sun was shining, but there was wind and it was 23 degrees. We got a great walk in, though, and enjoyed seeing how much of the ice has melted. We also had the entire park to ourselves, so overall it was a great walk even if it was frigid! 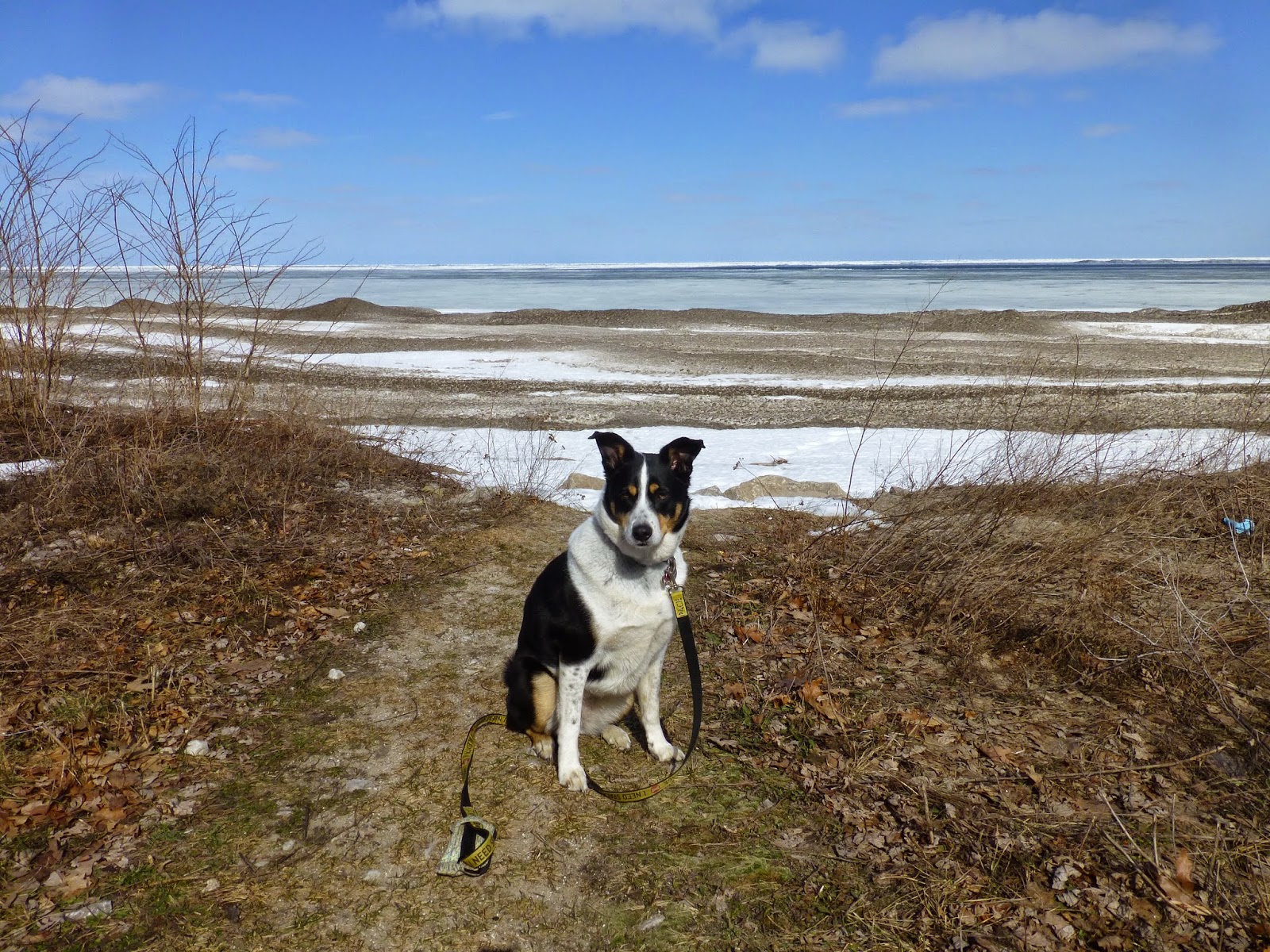 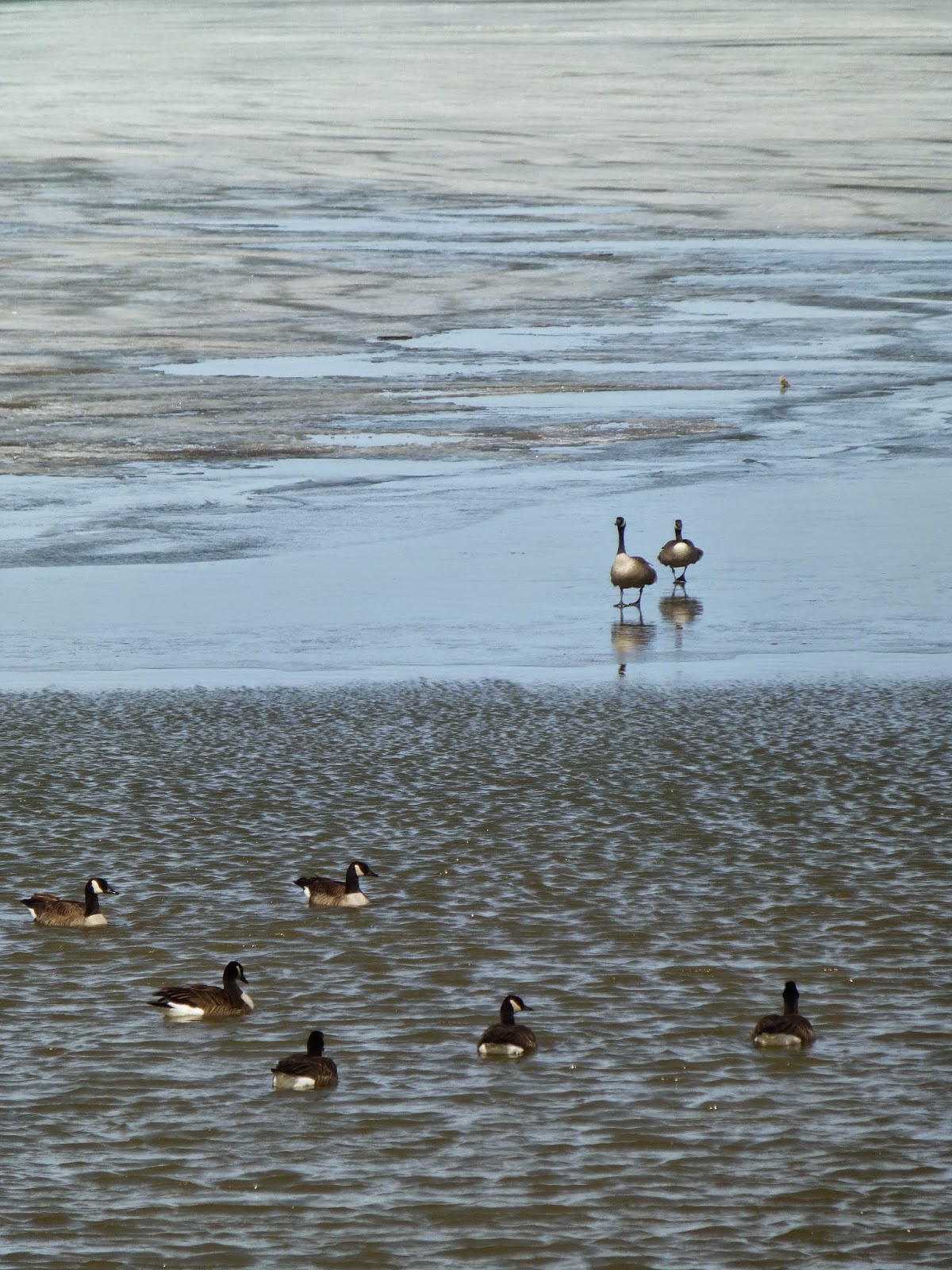 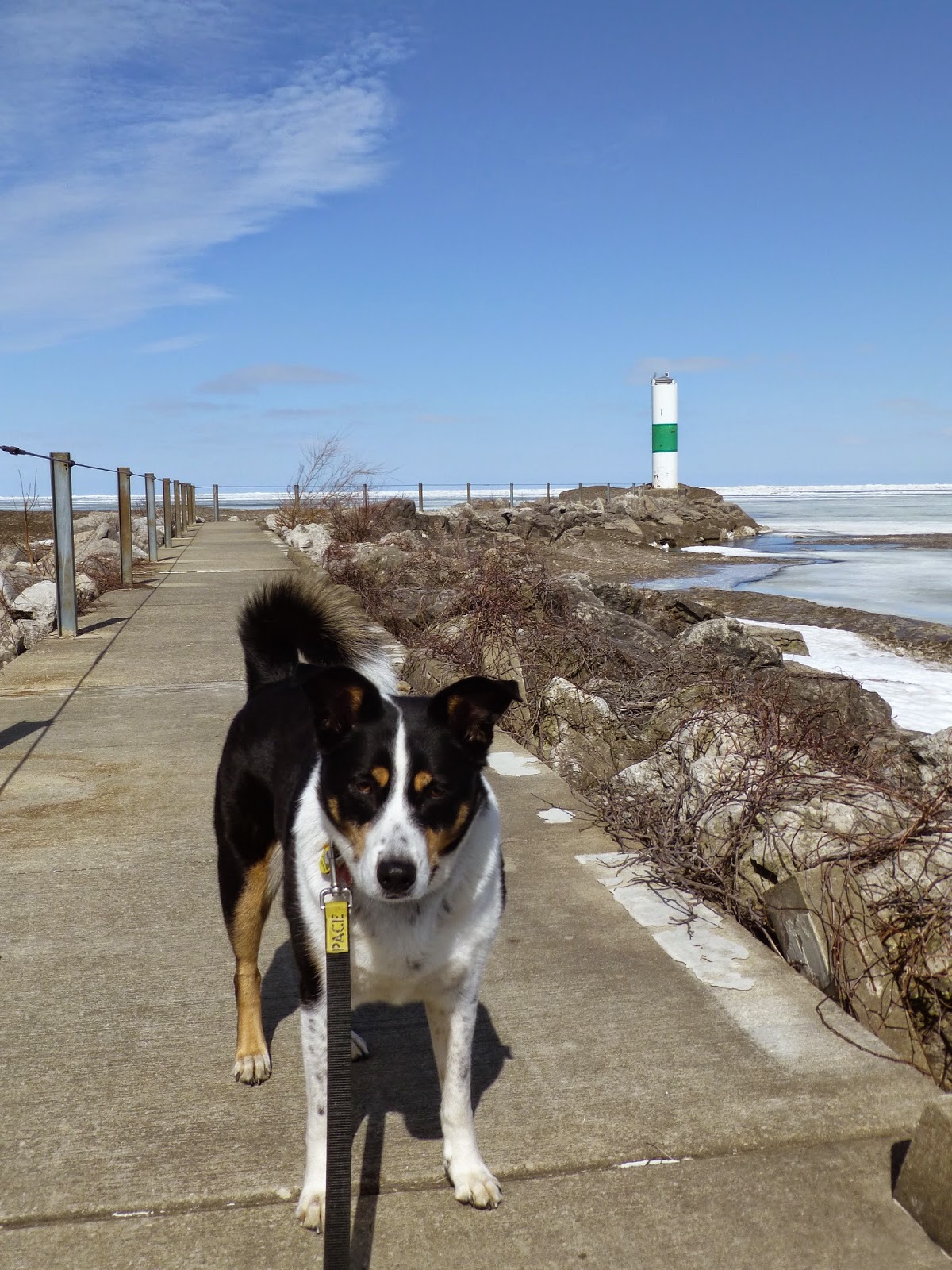 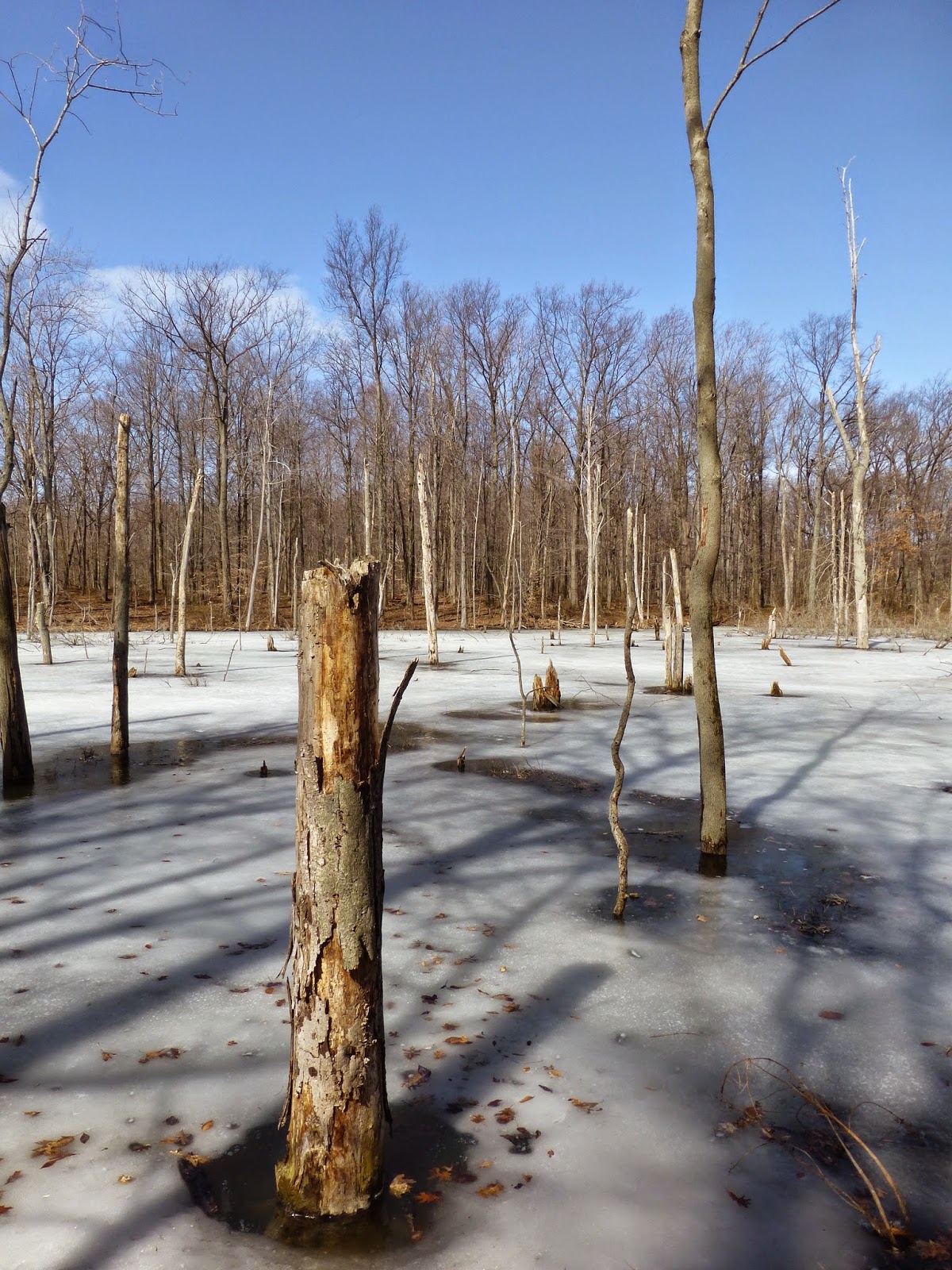 It was a big change from the completely snow covered roads and invisible trails we had the first week of March!

Holden Arboretum
This is our absolutely favorite place in the world. Barley knows all of the turns to get there and whines at each one. I'm pretty sure she could get just about anyone in the world to the Arboretum with all of the directions she gives from the backseat! We got to visit the Guardians of the Garden sculpture and most of our favorite paths were free of ice and weren't too muddy. 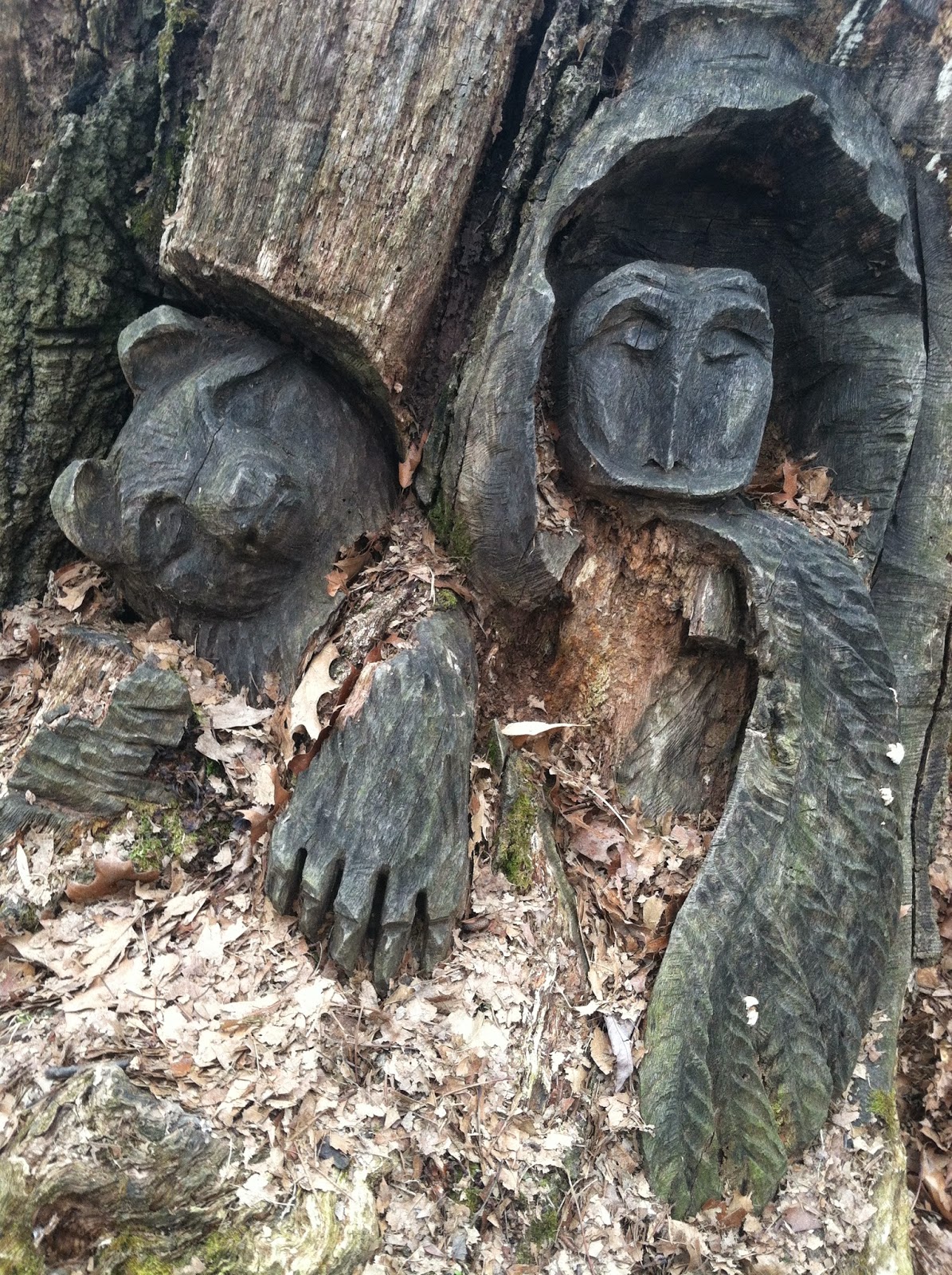 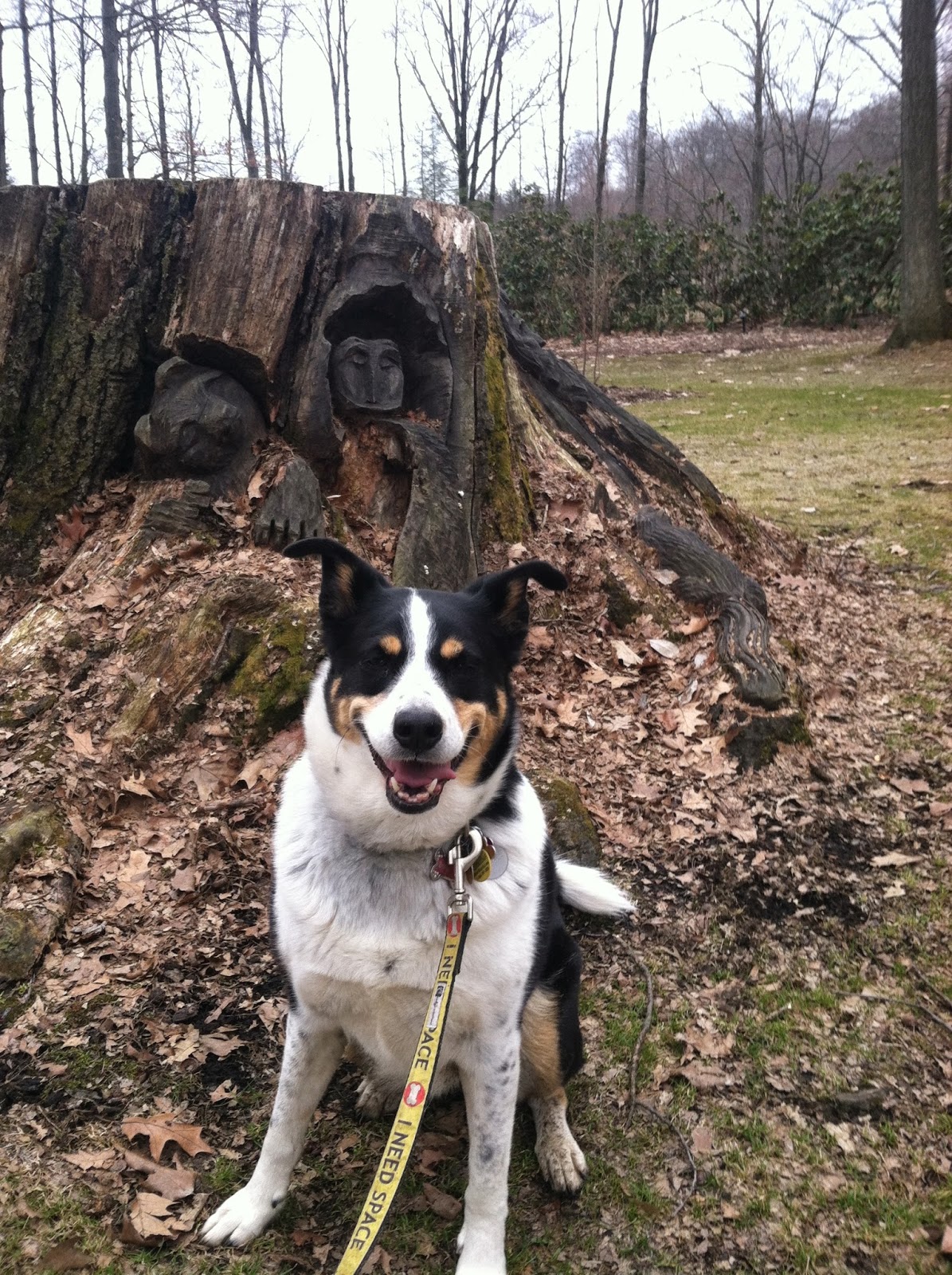 Barley and I did have a little battle of wills on the boardwalk when we went to check out the creek because she was super excited there was still snow and ice and I was not as excited to slip and slide all the way down to the partially frozen creek. It was still ridiculously cold, but I layered for appropriately and we didn't have the wind coming off of the lake, so it was a very pleasant walk. 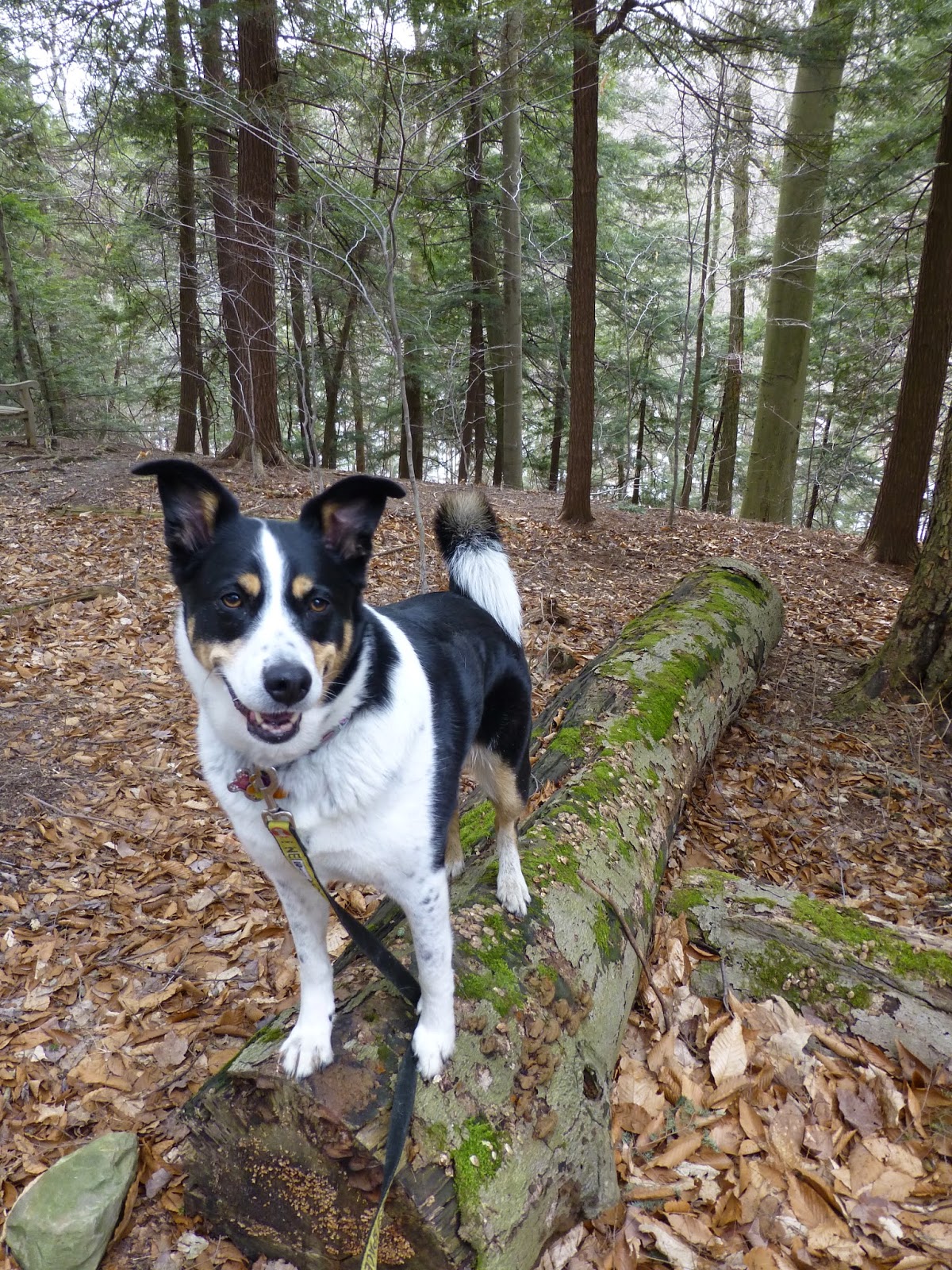 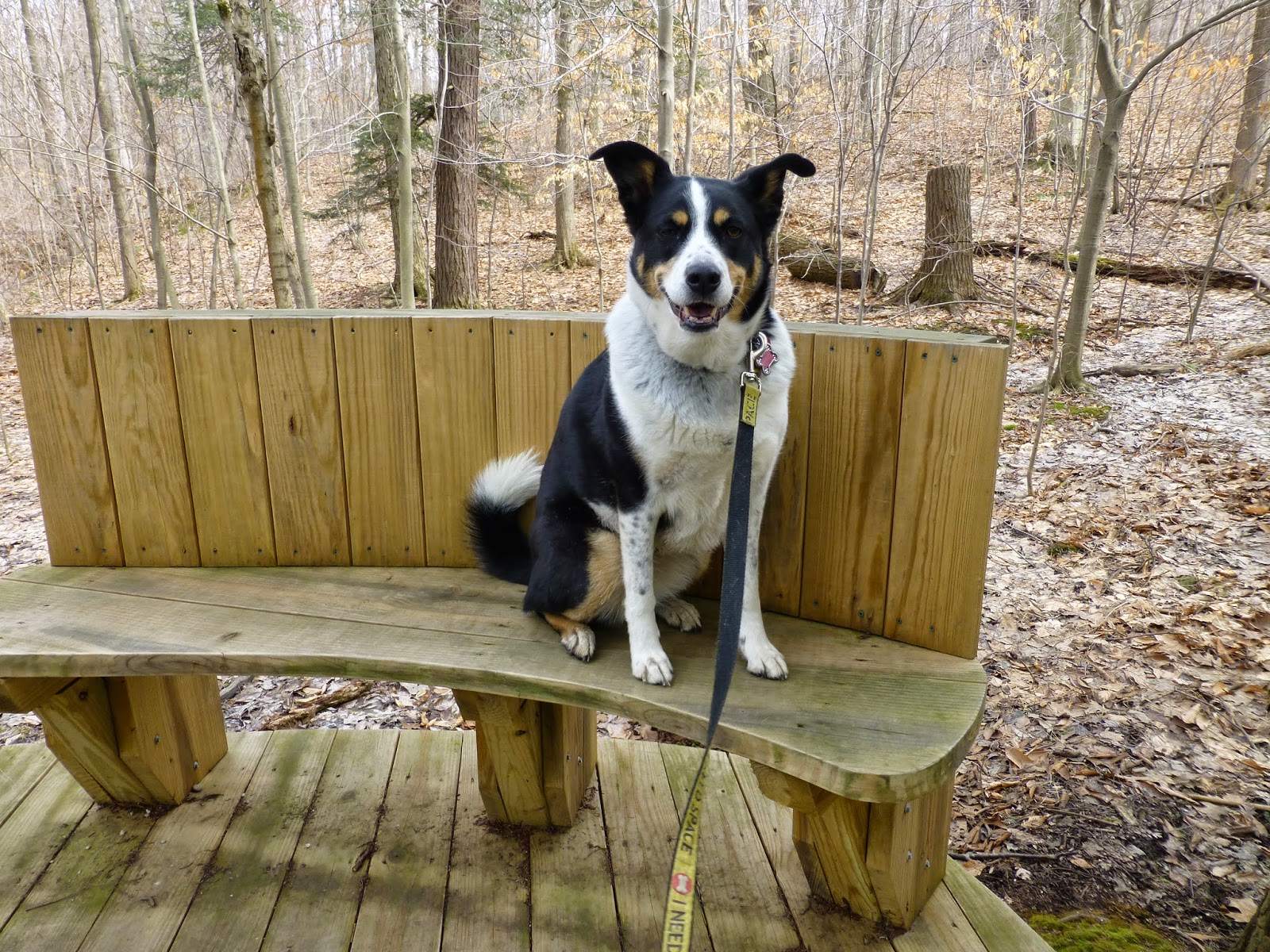 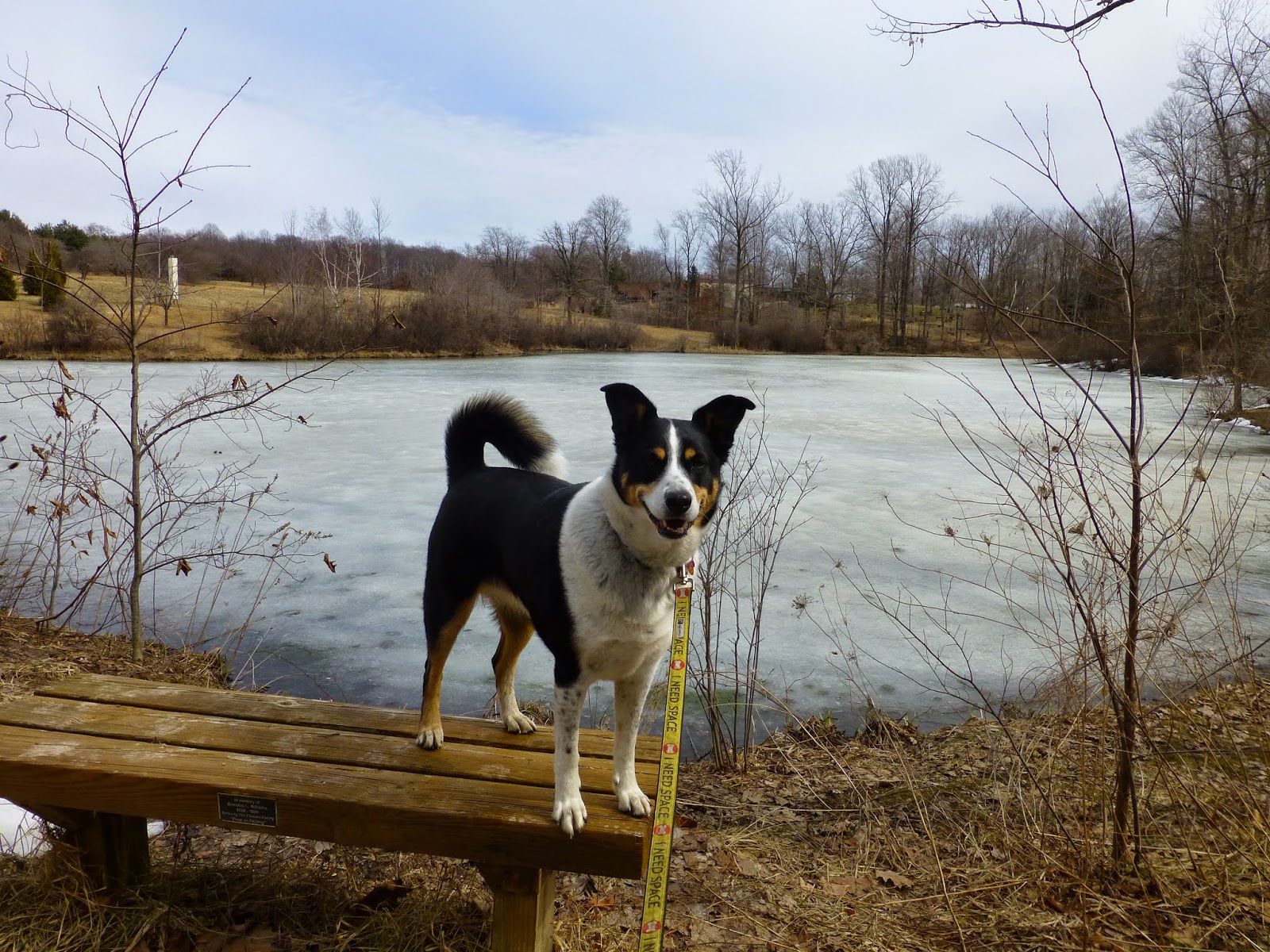 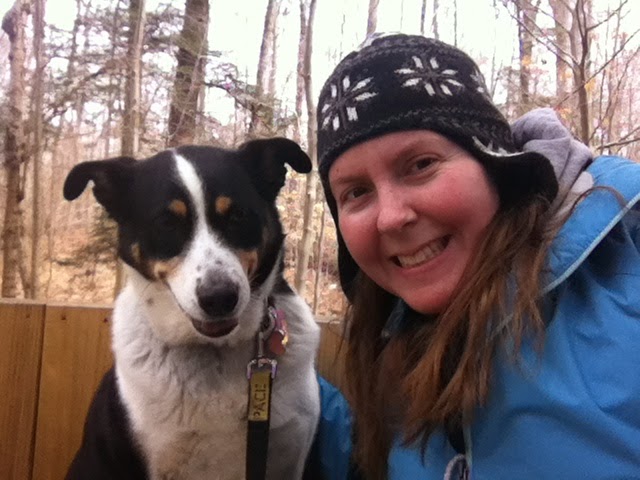 Of course, Barley did get a little worked up when we saw more Canada Geese--her grandpa let her "herd" them out of my parents' old backyard, so she requires a little more management around geese than she does around other creatures. Unfortunately for me, the geese were on the other side of a gate that I had to close and a certain crazy dog lunged for geese while I was trying to do that and made me slam my hand in the gate. I'm pretty sure the geese planned that as revenge for the torment my dad and Barley used to cause together. 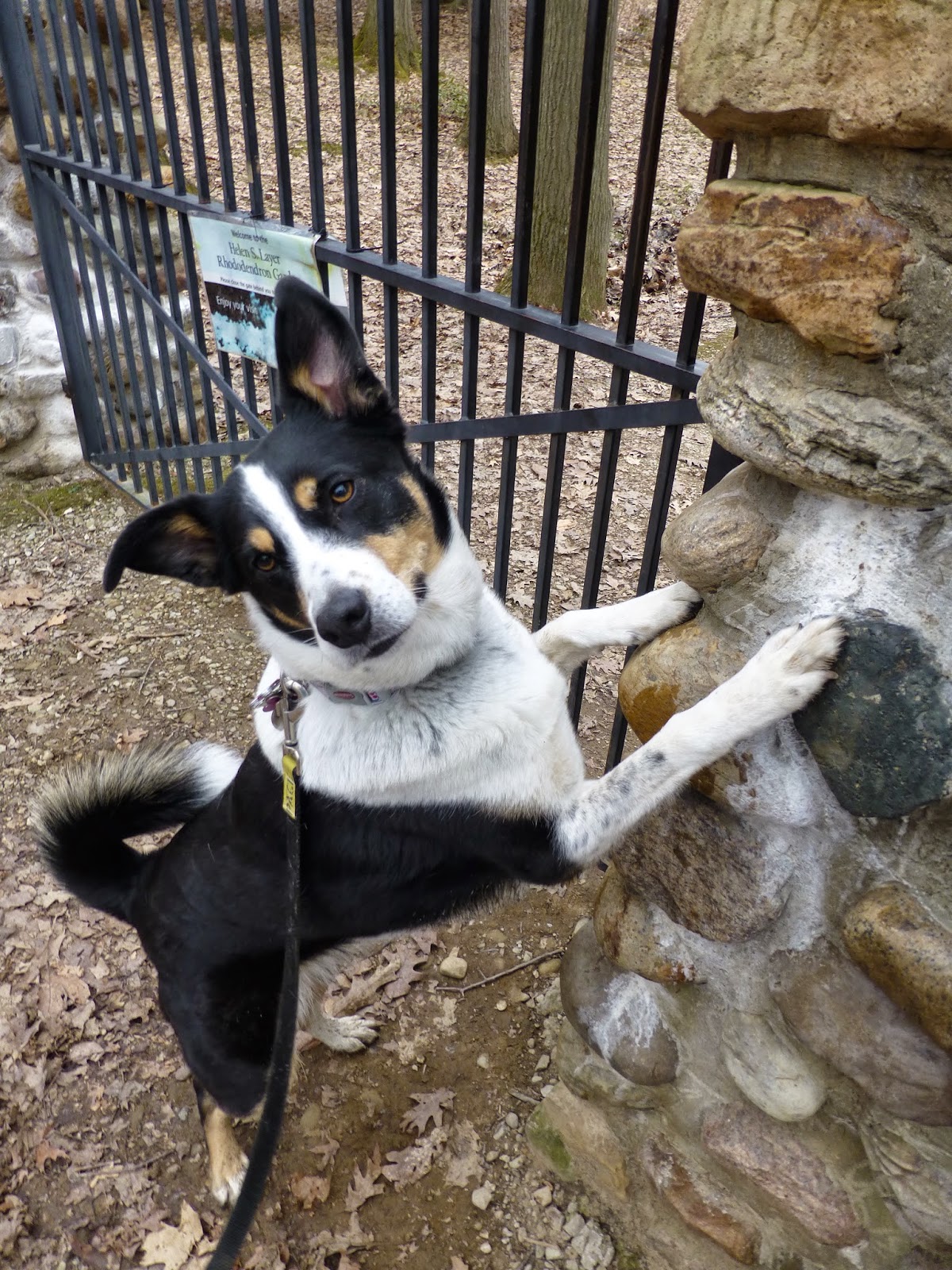 Chagrin River Park
This is another of our favorite parks because even though it's usually well populated with lots of dogs, their owners are almost always responsible. They follow the leash laws and they give us plenty of space when Barley and I pull off the trail to let them pass. They don't try to insist on letting our dogs meet or talk on their phones while remaining completely oblivious to the fact that their dog is getting closer and closer to my dog. It's a great place for Barley and I to practice her reactions to other dogs without having to be too worried about having a terrible experience.

We also love this park because there are a lot of deer. For some reason, the deer are rarely scared of Barley. Once upon a time, Barley got ridiculously worked up over deer. There was one day when I was on a rail trail near my parents' old house and a deer hopped across the trail into the woods; Barley sat down and started barking her head off--of course, we were around a curve so all of the people walking in our direction hadn't seen the deer and probably thought I just had a psycho dog that was sitting in the middle of the trail losing her mind. I had to squat down in front of her and put her in a bear hug just to get her to calm down enough to keep walking. After lots of practice, Barley's gotten to the point where she doesn't care about deer at all. She likes to look at them, but I don't even need treats to get her to pass them on the trail (although I do occasionally reinforce her good behavior with some snacks so she doesn't change her mind about how uninteresting the deer are). Now, when we see deer, so usually stops to pose with them. 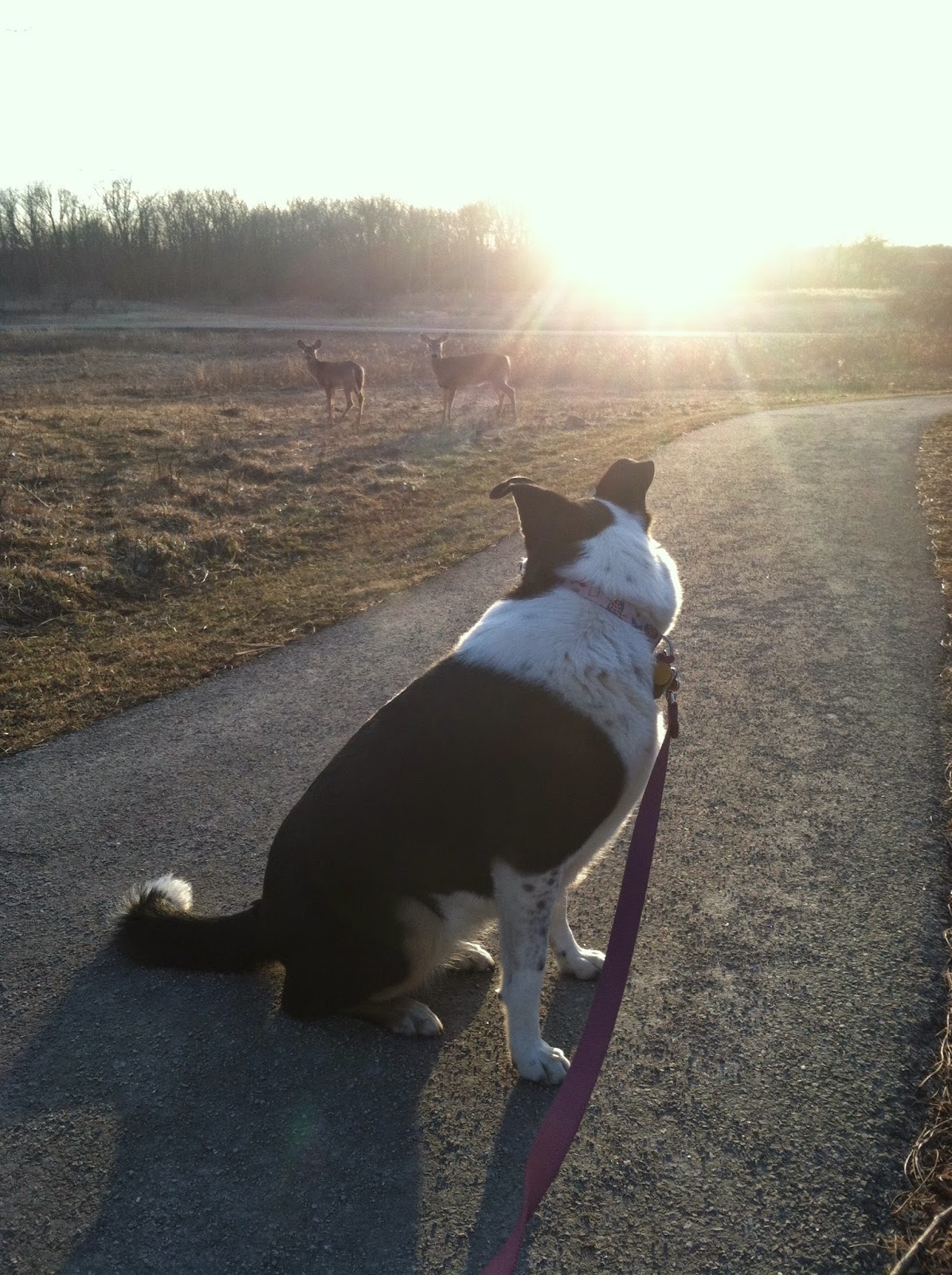 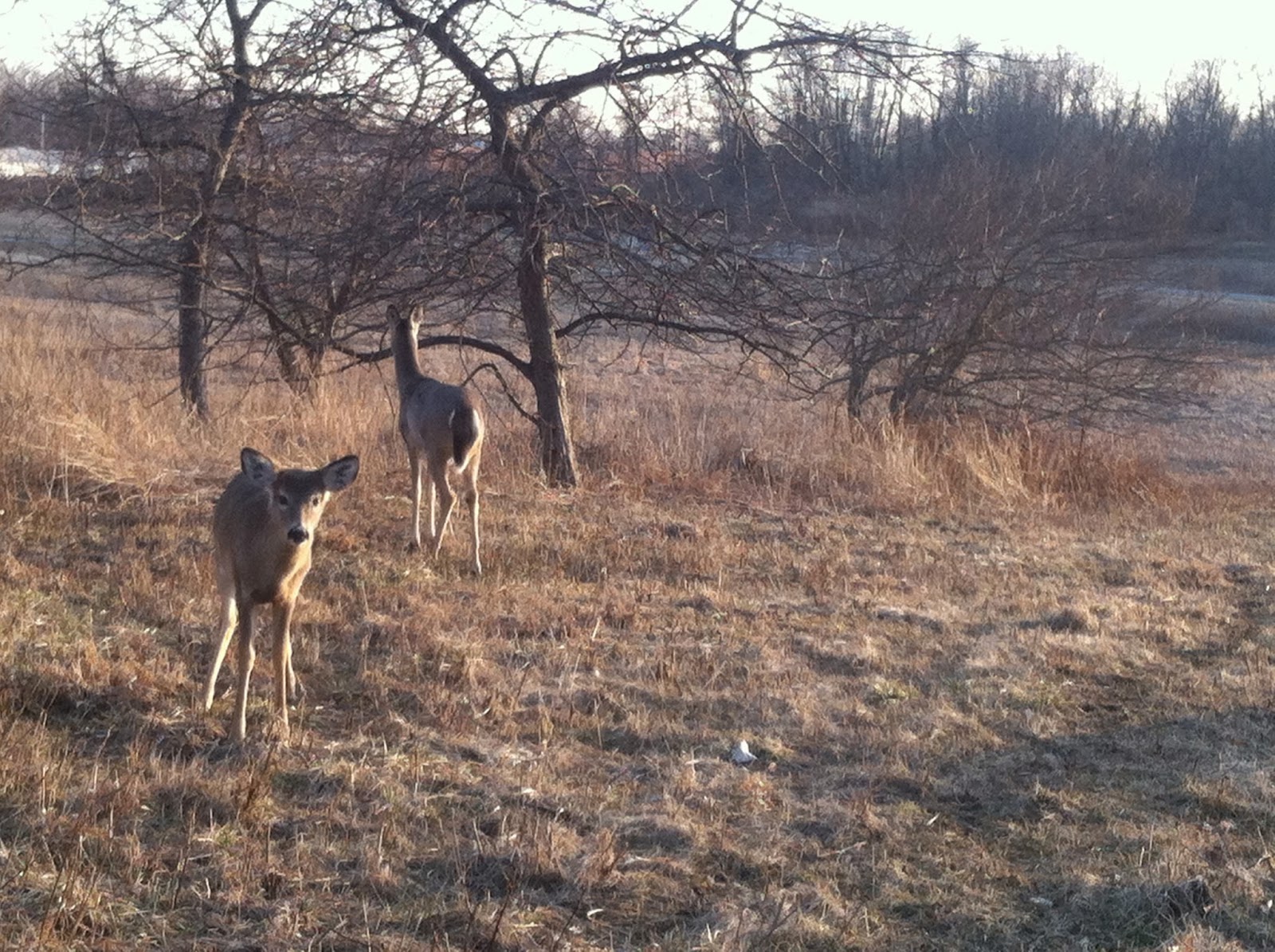 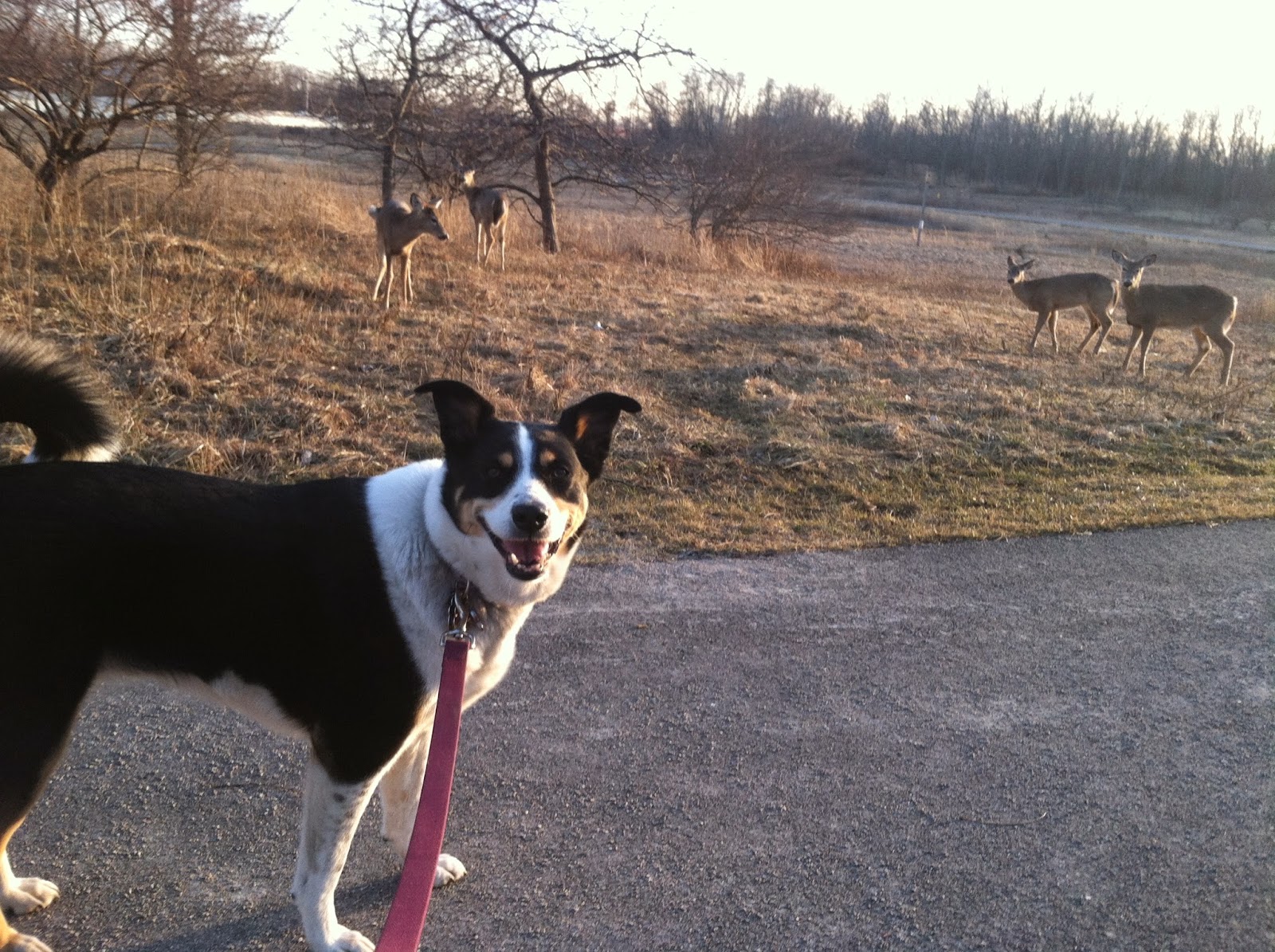 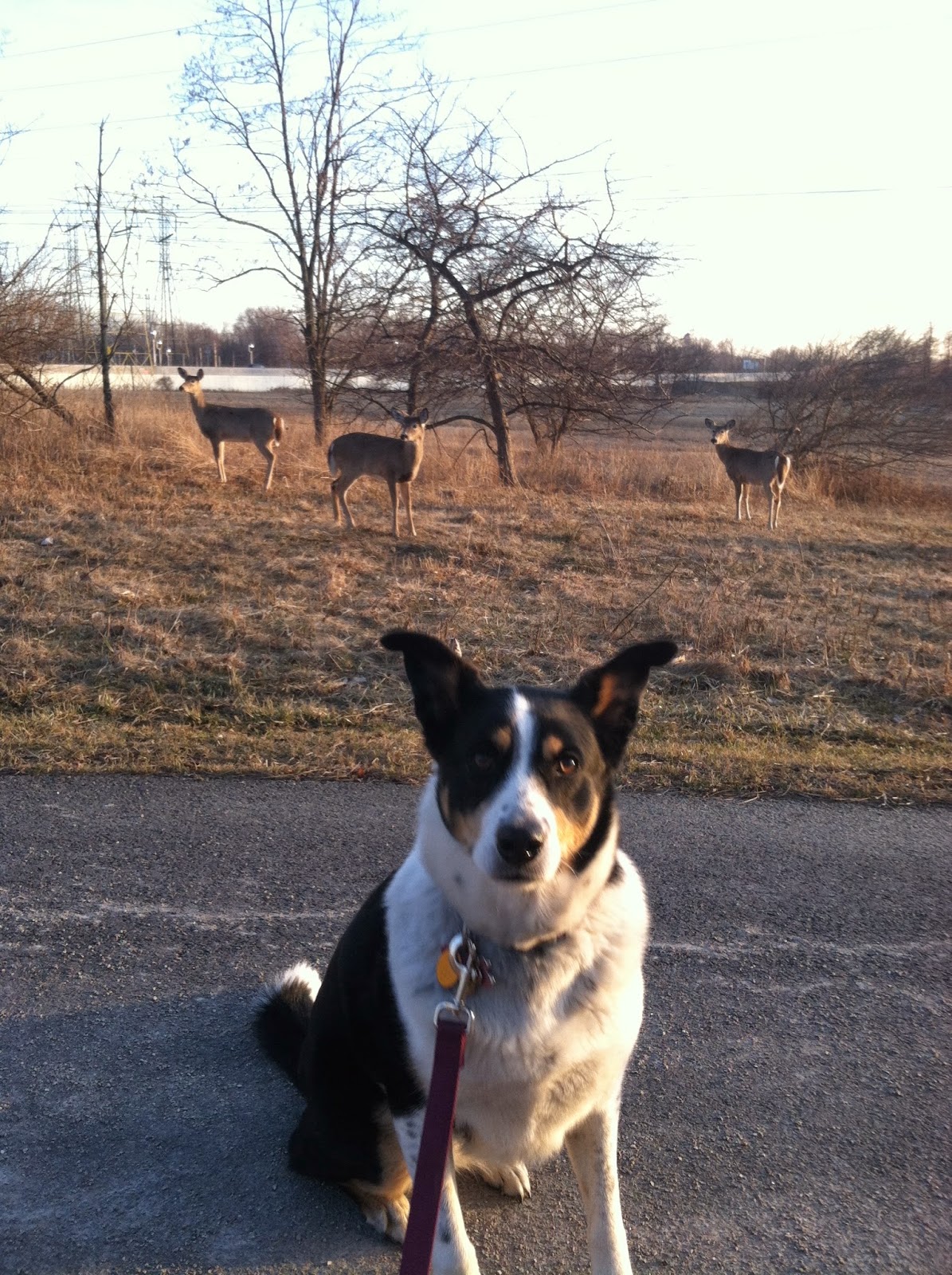 I thought the littlest one that was closest to us was going to creep up sniff Barley because it kept inching closer and closer. I'm not sure how Barley would have reacted to that, but since every single commercial break I get on Hulu is that Android commercial, I've been dying for Barley to have a weird animal friend! A few minutes after we took these pictures and moved on, we saw another dog coming down the trail behind us and the deer scattered, so it's kind of cool to know that don't just hang out and pose for pictures with every dog that comes down the trail.

I can't believe Spring Break is almost over already, but I'm glad that we got a chance to visit a couple of the parks we hadn't been to since November. It's currently snowing again, but we're only expected to get about half an inch, so hopefully we can survive this lingering bit of a winter! Hope everyone else has had more Springy conditions to enjoy, too!