His Notice Sudden Is

I apologize for being MIA the last couple weeks. Barley, Soth, and I took off for Alabama to celebrate my dad's birthday and have one last getaway before the new school year starts. I had every intention of joining in on at least the FitDog Friday fun, but I was hot and lazy and it just didn't happen.

Most of our Alabama visit was uneventful with very little to report. Almost every day, we got up to be out the door for a walk by 7:00 because even then it was hot and steamy. This was not an easy feat because I am not a morning person and Barley will sleep in as long as I will as long as she can snuggle up beside me.

I've mentioned that our walks there aren't very exciting. My parents' neighborhood is 3 streets and full of loose dogs, so they are stressful but also a little boring after you do the same walk twice a day for almost two weeks. There are few dog-friendly places to walk and the few close by trails have very little shade.

To spice things up a bit, I did a little research about some trails near Birmingham, which is about an hour drive. (One of my searches for best dog trails in Birmingham came back with these great looking parks--I was very sad when I realized they were for trails in a Birmingham in the UK!) We found a park called Moss Rock Preserve and convinced my mom to wake up early and load our dogs in the car for a little morning adventure.


The park was nice. There were clear trails and lots of shade, so even though it warmed up quickly we were able to get in a decent hike with lots of water breaks. 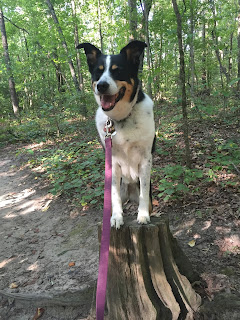 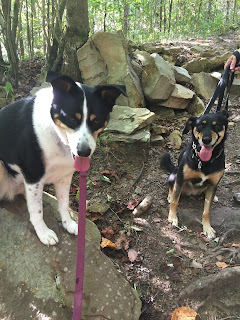 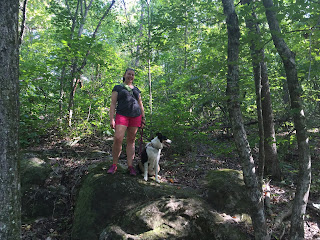 There were a lot fun rock formations. Apparently a lot of people come to this park to rock climb and Barley did a little bit of that herself. 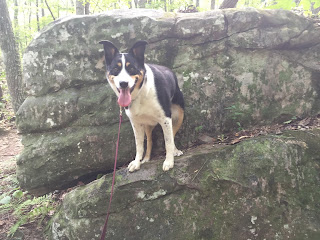 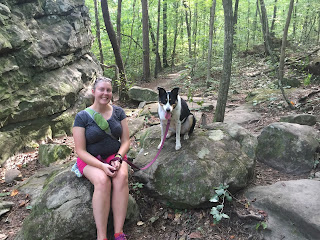 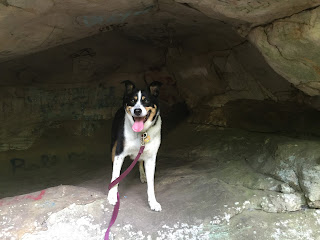 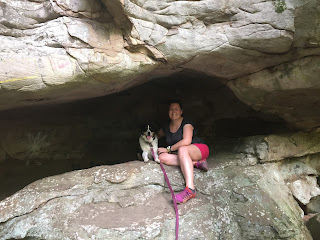 On the way back to the car, we decided to take a different trail back to the parking lot to see the other side of the park. Shortly after we crossed the bridge over the stream, I saw something slither by Barley's foot. I froze. I looked down. I screamed. Barley was a few feet ahead of me and on a rock between us was a copperhead. I didn't know what to do. I didn't want to step over it and I didn't want Barley to have to step over it, either.

I noticed there was about a foot off to the side of it where one of us could potentially sneak around it. Since my mom and her dog were behind us, it seemed more logical to get Barley back on our side of the snake than trying to get all three of us on her side.

I angled myself hoping that I could call Barley through that little space. I took a deep breath and called her. To my horror, she stepped on the snake! Luckily, the rock was slanted and it rolled off the rock, so we sprinted back towards the bridge. When I stopped and turned around, the snake was coiled up at the bottom of the rock. Emily Dickinson said it best when she described the feeling of seeing a snake as making you go "zero at the bone." This was without a doubt the scariest moment of my life with Barley.


We decided to just retrace our steps on the original trail and forget about adventure. I had officially had more than enough than enough nature, so we stopped by Starbucks on the way home and I was content with the boring neighborhood walks the rest of our visit. 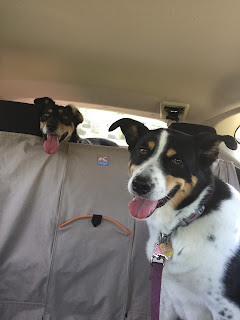 This adventure contributed to  26.28 miles last week and we've continued that trend--meeting our goals, but not getting too many extra miles--with 26.70 miles this week. We're looking forward to catching up on what everyone else has been doing while we've been away!!