Growing up, I never thought much about a dog's need for a job. We never did any training with my childhood dogs beyond the basic skills necessary for living successfully inside a house; sit, down, shake, and potty training was about all they got. Loose leash walking was not part of their daily life and my first dog especially would pull and wheeze at the end of her leash from the second we left the house until the second we got home. There was no recall training--although my first dog was allowed off-leash on the beach.

After they passed the puppy stage, though, they were never destructive or got into trouble that sent them to the vet. I didn't think of it in these terms back then, but their job was to love us. They were happiest when they were near us or playing with us or being pet by us. They didn't need to herd things. They didn't need to fetch for hours on end (although our second dog did love to fetch). They were lovers and that was enough for them.

Then I got Barley and all of the sudden, my little border collie mix made it clear that I had to think about giving a dog a job. Without a job, Barley gets into the trash, finds things to eat that she shouldn't, climbs onto the counters, digs holes in the bedding. She needs to do more than just love me.

She gave herself a job in the first few minutes she was home when she decided herding Soth was her  household chore. 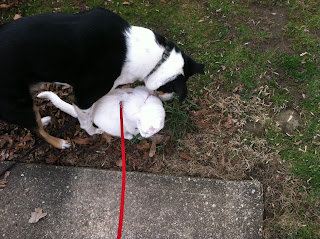 She still thinks that keeping her brother in line is her responsibility, but it's not enough work for her, either. Soth doesn't move enough for her to exercise those border collie instincts all day long and I made it clear long ago that I'm a terrible sheep, so she has given up trying to herd me most of the time.

We've tried various dog sports to give her something to do, and she'll be focused and ready to work when I pull out our odor kit and do some noseworks, but that only occupies her for so long. She enjoys agility, but if there's something more interesting happening (ex. car headlights shining through the window or the sight of her reflection), she's willing to stop doing it and pursue those new interests. So noseworks and agility are hobbies, not jobs.

I thought maybe walking was her job--she does love her walks and gets antsy if she misses one, but they also don't wear her out, either. We can take a five-mile walk in a park, come home, and by the time we get back in the door, she's ready to root in the trash or find a tasty litterbox snack.

A few weeks ago, though, I realized what job Barley takes the most seriously.

The local pet store was doing Santa pictures--we had taken them a few times before at a vet's office to benefit Barley's mothership, the county APL, but the space was small and crowded and it made me anxious. I decided we'd try the new spot out--we could walk over there, survey the parking lot and store windows, and decide whether we really wanted to go in. Nobody else was in the shop, so we went in.

The photographer was setting up her camera, Santa was adjusting his hat, I was trying to figure out how to squeeze in between Santa and the partition. But Barley was sitting and staring carefully at the camera--as the photographer moved the camera around, Barley followed it with her eyes. Finally, the photographer said, "None of the people are ready, but that dog looks like she knows exactly what she's doing." She snapped a few close ups of Bar as Santa and I finished getting ready. 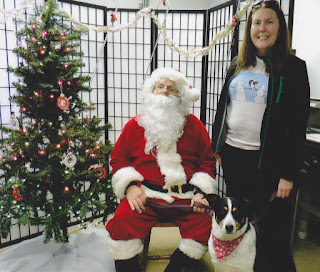 On our walk home, I realized the photographer was right. Barley is the most alert when a camera is present. Her sit-stays are most reliable when I've got the camera out and am moving around to find the right angle. She tries very hard to ignore distractions--whether that's birds, crashing waves, leaves blowing in the wind, or distant dog barks--when the camera is out.


Even when the camera is out to capture something other than Barley, she thinks she needs to be in he shot and comes running--I have countless closeups of flowers that have a Barley nose creeping into the edge of the photo.


Modeling wears Barley out. We can take a shorter walk combined with a modeling session at the lake and she's ready to nap the rest of the afternoon. I've always joked that she binges on old episodes of America's Next Top Model while I'm at work, but that might just be true.

In Barley's eyes, she is a model and that is the job she enjoys the very most of all.

Be sure to stop by the other Barks & Bytes posts--thanks to Heart Like a Dog and 2 Brown Dawgs for hosting! 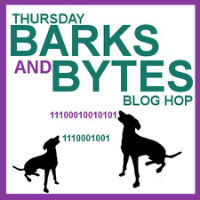