Recently, I saw another list about the dog breeds you think you want but probably shouldn't get. Every time I see one of these lists or lists about the worst apartment dogs, border collies are always on the list. There are a lot of myths out there about our lives with pets and the idea that a border collie can't live in an apartment is one that really gets to me. I understand where it comes from--border collies are active dogs that need a lot of physical and mental exercise and with apartments, there is limited space and rarely a yard.

But when every single list that that circulates on the internet labels border collies as bad apartment pets, some really great dogs run the risk of missing out on life with some really great people simply because those people happen to live in apartments.

What these lists should really say is that border collies aren't pets for inactive families. I've heard of rescues and shelters denying applications for herding dogs because the applicants live in apartments. Luckily for me and Barley, when I went to our local shelter, they were so overcrowded and so understaffed that nobody called my landlord or my vet to make sure I was a fit adopter for Barley, so when I fell in love with her, I had nothing to worry about.

Border collies and other herding dogs need jobs and exercise, or they get destructive or hurt themselves, but that doesn't mean that they need a lot of space. Barley, Soth, and I live in a two-bedroom apartment, but Barley and I spend a lot of time training, hiking, walking, and playing, so I don't think Barley's missing out on anything a dog, even a herding dog, needs by living in an apartment. 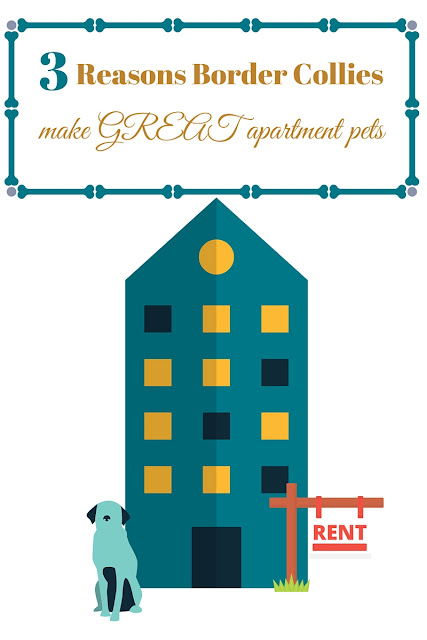 Border collies are smart and love to learn. Apartments can be places with a lot of distractions. You share walls (and depending on the apartment, sometimes ceilings and floors) with other people. You hear a lot of things: televisions, voices, vacuums, dishes clanking against the edge of the sink, other dogs barking. Barley and I have done a lot of reaction to distraction training and she catches on quickly. If she seems interested in a noise coming from the other side of the wall, it's not hard to redirect her with a verbal command and a reward. While barking dogs tend to be one of Barley's triggers, when one of our neighbors got a dog and we started hearing the occasional bark, Barley caught on very quickly when I turned to our previous training. I also placed her crate against the wall farthest from any shared walls in the apartment so that when I'm gone and can't remind her to ignore noises, she's farther away from the distractions. Our previous neighbors told me that they never would have known I had a dog if they hadn't seen me out with her. Nobody wants to live next to a dog that barks all day and if a person is willing to put forth the effort to train the dog not to react to the noises that come from shared space, a border collie is an excellent candidate for that training.


Border collies like to keep an eye on their "flock." Soth and I are Barley's flock. Anyone who comes into our home becomes a temporary flock member. Barley wants to keep an eye on all of and make sure we're all safe and we're all where we're supposed to be. Barley doesn't need a huge house because that would impede her ability to keep an eye on us. Even if Barley hangs out in one of the other rooms, she positions herself where she can see out the door and keep an eye on my movements. When we visit my parents, who live in a 4-bedroom, multi-story house, Barley stays in living room or kitchen where most people congregate or she hangs out in the open space on the second floor where she can look down into the living room. An apartment makes it easy for a border collie to keep their flock safe because there's less territory to patrol.


Border collies like team activities. Border collies and other herding dogs were bred to work with humans to take care of livestock. They like activities that let them work with their people. Even though I'm on a mission to make 2016 the year Barley gets a yard, I know she won't enjoy that yard unless I'm doing something with her. When we visit my parents, Barley prefers to be inside with me rather than out in their fenced yard. If I let her out, she might wander around and sniff for a minute, but the second I head back in, she's right on my heels. She's not the type of dog that wants to explore alone or will run around on her own. If there's a squirrel on the deck, she wants out to chase it, but as soon as it escapes the yard, she wants back in. She'll play outside in the yard if I throw a ball for her or get out her tunnel or a jump, but if I'm not involved in her outdoor activities, she doesn't want to be outdoors. She's much happier going to agility class or doing noseworks or going for a hike than she is when she's just hanging out in the yard.

Sidenote: Thank you to To Dog With Love and Paw5 and everyone else who was involved in the Paw5 Twitter Launch Party where we won a Rock 'N Bowl, which just adds to the enrichment Barley gets in her apartment life! 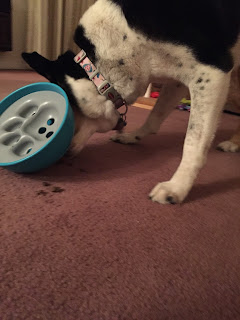