One Day at a Time

It seems like Barley and I were just starting classes at the new training center, but this week marked our third week--which is half a session--there. I'd like to say that we've overcome the challenges of the big window by now, but it seems like each week brings something new.

In Week 2, one of our regular classmates was out of town, a new classmate joined us, and another of our regular classmates came with a second dog to take the place of the missing dog. Barley handled the changes in dogs very well. Barley always has the floor to herself when it's her turn, so we didn't have to worry about having close encounters with them and could just work on staying calm while they worked.

But the new dogs brought new challenges. Since one person had two dogs, one was crated while the other was on the floor. The dog we're used to has been working on staying calm in the crate when his mom is out of sight, but he was very vocal about being left in the crate while his sister came out on the floor. His sister also somehow got her mouth caught in the bars of the crate during one of Barley's turns and started screaming. Barley immediately stopped in her tracks and started to shut down. I stuck her leash back on her and we started doing some of her relaxation and focus work while the dog was freed and checked out by her mom and our trainer.

The other new dog wasn't an issue at all. He's young and high energy, so we all left the room while he took his turns so he had fewer distractions to work with the first night. Barley and I worked on just relaxing in the storage room off of the main training floor. 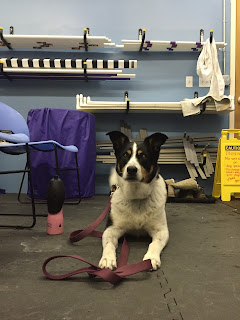 Last week and this week, the windows have continued to be a challenge, but our trainer's been giving us some warm up exercises at the end of the floor with the windows to help Barley get used to looking at me for cues rather than admiring her reflection or investigating the headlights in the windows. This week, our trainer had 4 jumps set up in front of the windows and we worked on sending to the jump and calling Barley back to my side for a treat before sending to the next one. We do variations of this any time Barley gets a little wacky and doing it in front of the windows was a good way to remind her that I'm supposed to be the interesting thing in her environment. After we did the drill twice, she was much more focused and was able to do a whole course--with well timed treats at the window end of the room.

Barley had an up close encounter with her new classmate this week. I had Bar set up on her mat in the storage room and I stood in the doorway, so I could listen to the feedback our classmates were getting. At one point, our new classmate got distracted and decided to wander over our way. I wasn't able to get the door shut before he got through. He came bouncing towards Barley, ready to play. That's usually the behavior that sends Barley into a tizzy, but she didn't snarl or snap and she didn't even get a mohawk. She also didn't tell him that she wanted to play, but she remained calmed while his mom came and collected him. And I took steps to make sure we could get the door closed faster should he mosey on over our way again (and the poor fellow had a door shut in his face twice that night!). I was so proud of the way she reacted.

We haven't settled into the new routine as quickly as I'd like, but as always, Barley reminds me to be patient and take training one step at a time, one day at a time.