Last week, Barley got to make some new friends when we met my co-workers for a mid-day walk. She loves to meet new people, but I this week I was excited to take her back to visit some old friends.

Long time readers know that Barley has one of those weird animal friendships with the deer in a park near agility class. She's been known to sit patiently on a trail with deer grazing less than 5 feet away (even though she can't be that close to most other dogs). Since our training center moved, the park where Barley's friends live isn't as convenient to get to. It's finally staying light enough that we were able to visit the park after agility this week.

I always love visiting this park after class because the sunset over the river is always stunning. Barley seemed excited to see the sunset, too. 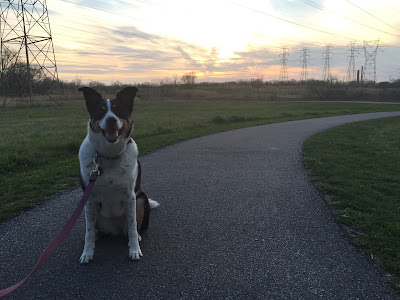 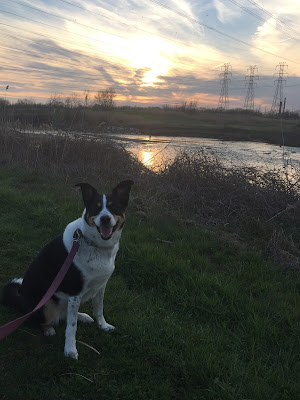 When we first got to the park, there were a lot of people walking their dogs and the deer were staying deeper in the woods along the trail. We could see them and Barley's tail was wagging away, but the deer never linger along the trail long when there are many other dogs on the trails.


As we kept walking, I saw the deer chasing each other across a big field and then settling along the trail we had to take to get back to the car.  There were about 8 deer eating alongside the trail, and Barley was so happy to see a group of her friends nearby. 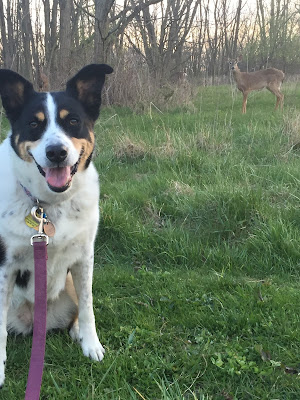 The deer stopped their eating long enough to look up and smile for the camera, and then they were perfectly content to go back to feeding while we watched them for a few minutes. 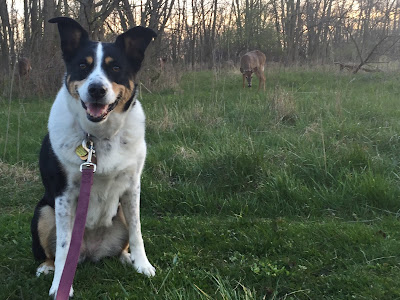 We ended up doing about a mile more than I'd intended on going since I had plenty of work waiting on me at home, but it had been months since we'd been able to visit this park and seeing how happy Barley was to be back made it totally worth getting home late and having to stay up until after midnight to finish grading papers.

I was glad to see that Barley is a good little Girl Scout and kept her old friends despite making some new ones--after all, "one is silver and the other's gold."
Posted by Beth at 3:19 PM