We hadn't visited the Geneva State Park in a few weeks. Now that we live in a neighborhood where we can walk by the lake every day, it's harder to convince myself to get in the car and drive to the park--even though it's only about 5 minutes farther away than it was from our old home.

Earth Day seemed like a good excuse to visit the park and get a little closer to the lake, though. Barley was excited for the change of scenery. 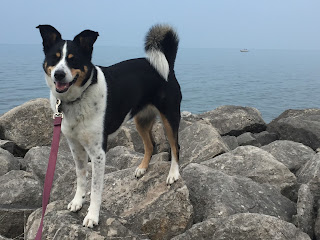 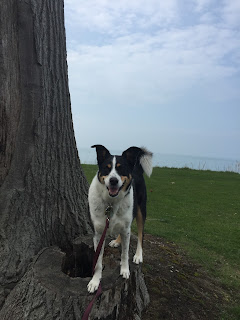 Barley was especially excited to get to use Mother Nature's agility course with driftwood on the beach. 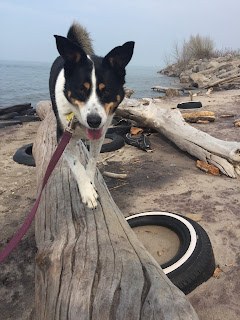 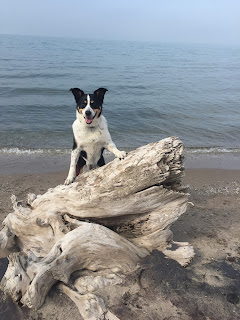 We had such a good Earth Day walk that we ended up going every day this weekend. Each day was a completely different walk. Friday was a nice relaxed walk with lots of stops for pictures. Friday also included lots of direction changes because somebody was extra interested in the Canada Geese and after she insisted on lunging at each one we saw, I made the executive decision to change paths each time we saw one.

Saturday was a fast-paced walk because it had cooled off quickly and I wasn't interested in standing still for long since I had one less layer than I really needed.

Sunday was my favorite day at the park. It was sunny and cool, but not too cold. I'd originally just planned to go for a short walk--I wanted donuts from the local donut shop that you conveniently have to pass to get to the park, so I was using a short walk as a good excuse to get a donut.

But the day was so nice, we just kept walking. Barley started moving towards one of the paths that leads to the beach and while I usually don't let her decide where we're going on walks, I know that tourists will be invading soon and our days on the beach will be more limited until fall, so I gave in let her lead the way. 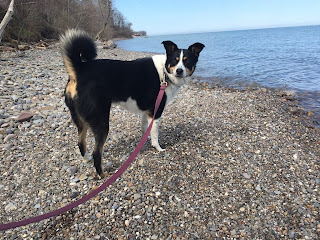 Barley doesn't swim, but she does like to charge at the waves and chomp them. It was a pretty calm day, so she didn't get as enthusiastic as usual, but it was still fun to watch. 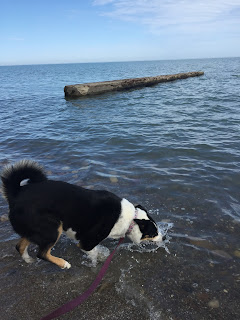 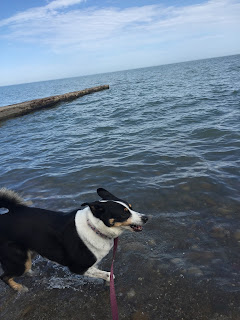 We also mixed things up with a stroll down the trail through the woods. We hadn't been on those trails for months just to avoid crossing paths with hunters, so it was a nice change of pace.

I decided to push our luck and take a second wooded trail after the first one turned out to be so enjoyable--little did I know that the trail would be a mud pit. Even though the trail head was just a few feet away from the first one and started out running parallel to the first one, we were slipping, sliding, and pulling our feet out of the mud. Neither one of us enjoys mud, but we enjoyed the views of the different ponds along the trail. 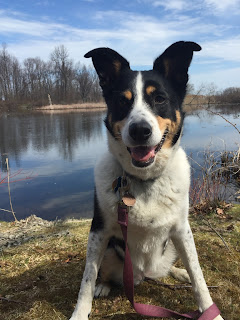 We were so happy to be back in a favorite place. Even though we see Lake Erie daily in our neighborhood walks, the park offers so many different ways to enjoy the lake without constantly worrying about being on the lookout for other dogs. We still see other dogs, but people in the park are very good at following leash laws and the visibility at the park gives us plenty of time to prepare for passing them or choose to change directions. Taking a few weeks away from the park gave me a renewed appreciation for the lovely place we live in.