The Power of Yes

If you came to this post thinking you'd find something along the lines of Shonda Rhimes' book Year of Yes, you'll be disappointed. This has nothing to do with facing my fears or being an introvert. After this paragraph, it will have nothing to do with Thursday night television. (Plus, Shonda and I aren't on speaking terms right now after what she's had David do to Susan on Scandal--I was ready to abandon Liv and the gladiators for a Susan-David spin off and then Shonda had to go and make me hate one of the only two characters I still cared about on the show. Really?)

This post is all about the most important word in Barley's vocabulary. The theme for this month's positive reinforcement hop is the power of play, but Barley refuses to play most games in the presence of other dogs, so it's not our most useful training tool. We can do relaxation games and focus games (but only if combined with regular treats). Barley won't go anywhere near toys when she can see other dogs. And even if she would, she is so easily distracted by other dogs that I would never want to throw a toy as a reward for going over a jump or through the weaves because that amps her up too much and if she got sidetracked by another dog in that state, it could be a disaster. So, play is a training tool we only use when combined with lots and lots of yummy things and I thought it would make more sense to focus on one of our most useful training tools.


When we first started training, our trainer stressed the importance of marking good behavior with a praise word followed by a treat. We started doing this with sitting in heel position--we'd stop walking, if she sat beside me nicely, I'd say, "Yes! Good Girl!" and then give a treat. We've since moved on to using this with looking at me when other dogs are around, for recall work, for weaves--pretty much every single behavior I've trained Barley to do. The praise becomes the reward when it comes before the treat, so in a situation when treats aren't allowed (or a certain chubby puppy doesn't need more treats), your dog can still feel happy and rewarded for doing good things.


A few weeks ago, Barley poisoned herself with some baker's chocolate. On our first walk after the incident, I was hesitant to give her treats because I knew she needed things that were easy on her tummy and none of the treats on hand fit that requirement.

I decided to leave the treat pouch at home and just do a quick loop around the neighborhood. We've spent so many years training yes as a reward, that we were able to make it 1.37 miles without a single treat (which may be a record for Barley).  This isn't something I like to do often. Barley doesn't like to work for free and she is a food motivated dog, so I like to treat randomly so she always believes that a treat could come at any time (if you treat every single time after they've really learned the behavior, they'll start to think they can hesitate and do whatever you've asked whenever it's convenient for them).

Barley will also quit working if I go too long between treats. When I'm trying to keep her away from the cat food, I can call her name and she'll turn and when I say, "Yes! Good girl!" she'll come running out of the kitchen to me--but if I do that more than a couple times, she'll decide the cat food is a much better reward than "yes" and she'll ignore me. If I don't treat often enough when she sees other dogs, especially new ones, her hackles will raise and I can feel a growl rumbling up the leash.

Barley always prefers the food rewards--and I can't blame her because I'd rather have someone give me a snack than tell me I'm a good girl, too, but yes is a word we couldn't survive without. It keeps treats from losing their value. It helps us get out of the house even when treats aren't an option. Most importantly, though, it makes Barley happy and that's the best kind of word ever. 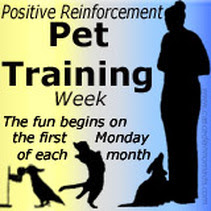 We're joining up with Tenacious Little Terrier, Rubicon Days, and Cascadian Nomads for the Postive Reinforcement Pet Training Week that begins on the first Monday of each month and lasts all week. Be sure to visit all of the other great blogs participating in the hop!