The Most Beautiful Barf

A couple weeks ago, I found myself faced with the decision of whether we should rush to the emergency room or not because Barley had once again helped herself to something she shouldn't have.

Every now and then, I get a Plated box to make my life a little less hectic or to try recipes out of my comfort zone. This particular week, one of the recipes involve making homemade ricotta cheese to put on a pasta dish. Usually, the recipes I get are simple, quick, and delicious--but this time my attempt at cheesemaking failed miserably, meal prep took way longer than it should have, and I was crabby. I tossed the gross, drippy cheesecloth into the trashcan and didn't think about it again.

I wasn't far behind her, but I was too late. She'd pulled that cheesecloth out of the trash and swallowed it whole! I wasn't sure what to do--I didn't want to give her hydrogen peroxide to make her barf it up in case it got twisted around on the way back up and caused more problems. It was after 10 p.m., so our vet had been closed for hours and the emergency vet is an hour away--I didn't really want to make that trip, either, since Barley has a history of barfing things up on her own or passing them out the other way. I was definitely more concerned this time, though, since a cheesecloth is much bigger than a penny or a rock or pieces of plastic from a treat bag she's shredded.

I cried. I cursed. I called my mom. I repeated these things several times. Finally, I decided to just watch her closely and wait to make a decision.

For two whole days, there was no sign of that cheesecloth. Every time she went in the yard, I followed her like a shadow and watched for it. On every walk, I stood in neighbor's yards inspecting the poo bag a little more closely than one should do in public. Nothing. But Barley was still up for her normal walks. She was eating normally. She was as normal as she could ever hope to be.

Then on the third day, I woke up to the sound of barf. I flew out of bed and to my delight, there was the most beautiful barf on my carpet. I'd been planning to call the vet when they opened that morning to see what they recommended, but Barley saved me from having to do that.

We've now got a gate in the entryway to the kitchen. Soth can still get through to get his food--and Barley can't get into get the trash.


Barley is not  amused by this new addition to our home decor. She bangs against it like Free Willy banging against the glass of his tank. So far, it's holding up well. 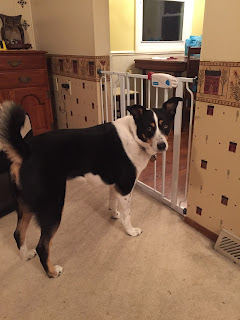 She's tried to fit through the cat door on several occasions, so I'm taking bets on how long it takes her to get stuck. 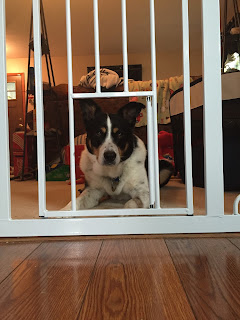 I'm kicking myself for not breaking down and ordering a gate sooner. Hopefully, Barley's mischievous moments will be even fewer and farther between now.
Posted by Beth at 10:10 AM