It's no secret that Soth is my problem child. He's the hangriest little critter I've ever met (and being someone who gets hangry easily myself, that's saying a lot), but he's also picky. For the longest time, he refused to eat pate style food, preferring only foods in gravy--and really, he just wanted the gravy and not the food. Then he quit eating the foods in gravy and now prefers to eat pate style foods. Sometimes he likes turkey, other times he won't touch it. The same goes for chicken. Even though I do most of my pet shopping at Chewy.com, I rarely purchase Soth's food from there because it's highly unlikely that he'll go for 24 cans of the same flavor and I'd have to purchase at least three different packages to have enough variety for his highness. I try to keep 3-5 different flavors on hand at all times so that he gets a different flavor each time we open a can.

When our friends at Chewy.com asked us if Soth wanted to review some food, I thought it was a great chance to try out something new to see if we could add a new flavor to our rotation. After looking at our different options, we chose Solid Gold Purrfect Pairings Savory Mousse with Chicken and Goat Milk. The description said that picky kitties loved the mousse texture, so I thought there was a chance Soth might enjoy this one. 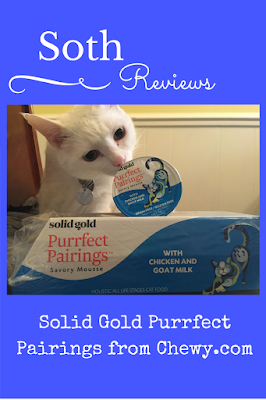 When I first opened the box, I was concerned. On the Chewy site, it said that the food was made in the United States, which is something I'm pretty particular about; however, the packaging said Made in Thailand. I'd done a little research before when I'd purchased him Weruva and then noticed the made in Thailand stamp, but I wasn't sure that I trusted all brands made in Thailand. I did a good search and found a few articles like this one that pointed out many high quality brands source tuna from Thailand, but I couldn't find anything specifically about Solid Gold. Part of me felt like no news is good news--at least there weren't articles connecting the brand to illness or death--but I was still a little wary of feeding it to Soth without more information.

So, I contacted Solid Gold directly to ask them if they could provide more information on how the ingredients were sourced and about the measures they take to ensure the safety of the food.

Within 12 hours, they'd responded with a very detailed explanation of the product. Some of the highlights include: "Unfortunately there are no more large scale commercial tuna canneries in the United States. There may be a few small ones here and there but not any available to us. Our product specialist who works directly with our manufacturing facilities has lived in San Diego her entire life. She has told me that 60 years ago San Diego was the tuna capital of the world. Chicken of the Sea still has their corporate office there, but the last large tuna canning operation, in Los Angeles, was closed down in the mid 2000s. We actually made our canned foods in an LA area cannery owned by Chicken of the Sea when she started at Solid Gold in 2002 but had to find another cannery when they shut down. We source our tuna blend canned cat foods from Thailand because there just is not a source in the US." The customer service rep went on to explain that the facility they use now is under FDA regulations because the parent company that owns Chicken of the Sea and Bumblebee tuna owns the cannery that is used in Thailand and the rep also explained the different testing processes that they do regularly to make sure that the food is safe to send out to customers. The majority of ingredients are sourced in the United States and nothing comes from China. Even though this was a chicken formula, there was still tuna in the ingredient list, so it wasn't sourced and manufactured 100% in the United States.


After reading such an in-depth response, I felt more comfortable letting Soth try this food. He'd been pawing at the box for days while I researched and then cleaned off a spot where pictures could be taken without an interfering Barley.


The food was very similar to Soth's normal pate style food in looks, but instead of being heavy and dense, it was light and fluffy--like a dessert mousse. 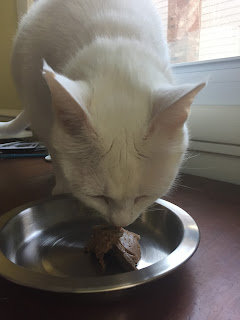 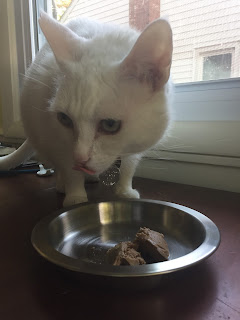 After waiting so long to try Purrfect Pairings, Soth was ready to dig in. I split wet food up into several little meals throughout the day since he usually doesn't eat much at one time and Soth gobbled down the bit I put in his bowl for his first try. 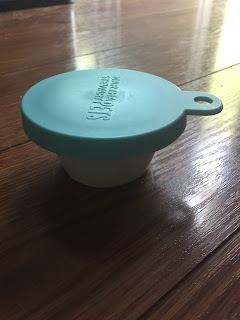 Another concern I had was storing the leftovers. Purrfect Pairings comes in a 2.75-oz. cups with a lid you peel off (like a yogurt cup for people). Since we split cans up throughout the day, we needed to be able to cover it back up and put it in the fridge. We have three different styles of can lids and it was immediately clear that two of them didn't work. I was afraid we'd have to tear off a little bit of foil, which always seems wasteful to me. Luckily, with a little effort, I got our silicone lids to fit.

I don't think I'll be purchasing this product for Soth in the future. It has good ingredients--after water for processing, the first ingredient is chicken (always a plus in our world) and it's grain free (which Soth's regular food is not). After the reassurance about the safety of the product, it's definitely a food I'd be comfortable feeding him. But Soth wasn't crazy about it, and he has the final say on food purchases around here.

Solid Gold Purrfect Pairings comes in several other flavors including tuna and goat milk, shrimp and goat milk, whitefish and goat milk, and chicken liver and goat milk. They come in a case of six 2.75-oz. cups, so it's a great way to add some variety to a picky kitty's diet without committing to a lot of cans of food. Chewy.com makes it so easy to order food with their 24/7 help and fantastic customer service reps, so if you have a picky kitty, it's worth a try!

Disclaimer: We were provided with a 6-cup case of Solid Gold Purrfect Pairings from Chewy.com in exchange for our honest review, but all opinions are my own and we only share information we think is relevant and valuable to our readers. Chewy.com is not responsible for the content of this post. Always consult with your vet before starting your pet on a new diet.
SaveSave
Posted by Beth at 9:07 PM