Friday was a big day with new things crossing our threshold. We got a Chewy.com package and a Pet Treater box for our upcoming reviews. We got a Snuffle Mat we won from our friends ZoePhee (it's a hit!).

We also got a new member of the family. 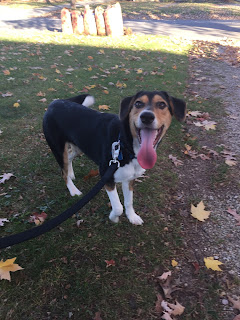 I grew up with two dogs and pretty much from the day I got Barley, I've dreamed about getting a second dog. When we lived in an apartment, that wasn't an option--there wasn't room and the lease didn't allow it. Ever since I bought my house, I've been thinking about it more seriously. One of the requirements when I was house-hunting was that there was room for two big crates.

Part of me hoped that foster pup Sal would become part of the family--I even picked out a new name for him--but it was immediately clear that he wasn't my dog. After Sal found his home, I was pretty sure that we would stay a single-dog home for a while--at least until summer vacation.

But then the shelter posted some Shar-Pei mix puppies on their Facebook page and I thought long and hard about going to meet them. They looked so much like one of my childhood dogs that I was pretty sure I needed one. Eventually, I decided none of those puppies would be quite the puppy I was looking for and I decided not to meet them.

The next week, though, they posted coonhound puppies and I love hound dogs. They wouldn't be available for a few days, so I had time to think about it. My mom said I was crazy. My friends said they loved puppies and wanted to have one to play with without having their own. My sister said they were cute and gave an enthusiastic yay when I told her I was going to meet them.

I went to the shelter and got there early, but there were already 9 other people in line ahead of me and only 4 puppies. I secured my spot in line and waited until the shelter opened. They let the first four approved applications in to meet the puppies, but said we could wait in case things didn't work out and then they'd move down the list. I decided that it wasn't meant to be and almost left, but I'd been talking to a woman outside who was looking for a cat and she encouraged me to come in and see which cat she ended up with. As we waited in the lobby, I saw a little dog in one of the crates. 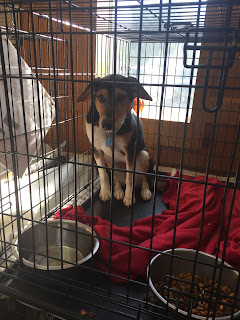 The foster coordinator was reviewing applications at the front desk, so I asked her about the pup. She was an 8-month old puppy they had listed as a Border Collie Australian Shepherd mix. She'd been surrendered to the dog warden because her previous family couldn't take care of her any longer (they couldn't remember if it was because of an illness or financial issues), but they'd loved her and wanted the best for her.

I pet her through the cage. She licked me. I told the foster coordinator I wanted to change my application from the puppies to this little dog. Once they finished finalizing the puppy adoptions, it was my turn.

After writing a check and signing some papers, I had a puppy.


Like Sal, she has kennel cough, so she's in quarantine and hasn't met her big sister yet. We've already lined up training with her and Barley as soon as the quarantine period is over. I want to make sure that we do things right from the very beginning. Until then, we're back to splitting my time between the pets (it seems to be going more quickly this time--maybe I'm used to it) and spraying Lysol all over the place. 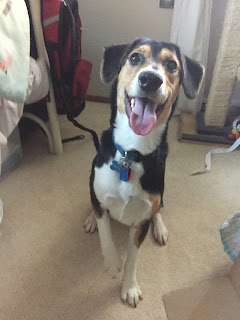 I struggled at coming up with a name for her--there were a couple varieties of hops I was considering and a literary name, but nothing felt right. My sister, her Aunt L (whose birthday is today!), came up with the name Rye. I thought about it for a few hours and the more I thought about it, the more right it was. 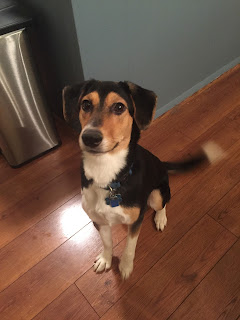 She's also affectionally called my tiny terror--she's like a little tornado. Rye hops from one spot to the next, picking things up and dropping them off in new places just to start all over again somewhere new. 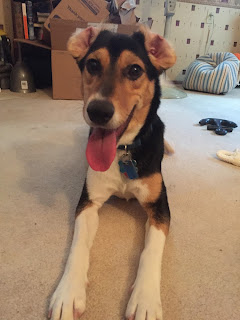 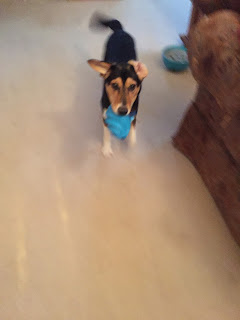 We've started the relaxation protocol Barley and I did years ago and Rye's catching on quick. She's also easily distracted, so we've made no progress on loose leash walking because every time I get her attention a leaf blows by before the treat makes it to her mouth. We'll be starting some indoor work on that soon, but if anyone has harness recommendations, I'm considering that option for while we work on this and would love to know what's worked for you!

In about a week and a half, we'll start our training sessions with both dogs. Keep your fingers crossed that Barley loves her little sister half as much as I do. Our focus will probably be back to reactive dog training for the foreseeable future, so bear with us as we start this journey!
Posted by Beth at 12:00 AM