Relax! (Or How I Trained My Dogs to Rest on a Mat)

I've mentioned how important our mat has been in our positive training journey for the last two months of the Positive Pet Training Blog Hop (here and here) and there were so many questions about our mat work training that when we decided to go with teaching our dogs to relax for April's theme, it only seemed natural to keep writing about our mat.


When Barley and I first started working with our trainer, our goal was to reset Barley so her default when I wasn't engaging with her was to relax in a down. We wanted her to do this everywhere--on walks if I stopped to talk to a neighbor, in formal classes when she waited for her turn, in the vet's office, and at home--so we didn't introduce the mat right away. Instead, we did a game similar to the relaxation protocol many people are familiar with.

Our trainer called it the one-hour down game (I don't know why since we were keeping sessions short). I told Barley to down once and when she did, she got a jackpot of treats between her front paws. Then I stood up straight and immediately bent back down to give her a treat. Gradually, we'd increase the time between treats. If she got up, I wasn't allowed to make eye contact with her or look in her direction. I just had to wait for her to figure out how she'd gotten all of those treats. The second she was in her down again, she'd get another jackpot and we'd start at the beginning again.

Eventually, we moved on to taking one step backwards and then coming right back and feeding. Then a step to the side and back to treat. We did this until I could walk all the way around Barley without her getting up.


We played this game everywhere: the living room, the training center, the backyard, my parents' house and yard, parks. Slowly, Barley started to relax out of her sphinx position into a position a nice relaxed position with her hips turned. We never used a mat and she did just fine relaxing on the floor, in the grass (as long as it wasn't wet), or on the sidewalk.

A few years later, we signed up for a reactive dog class with our same trainer and she introduced the concept of the mat as a safe place for dogs to relax.

We started just getting the dog comfortable with the mat. We'd set the mat on the ground and let the dog decide to step on it. Sniffing it, putting a paw on it, or interacting with it in someway earned a treat.


Once the dogs were comfortable with the mat, we'd walk them up to the mat and ask for a sit on the mat. A sit earned the dog one treat. Then we'd ask for a down, which earned them a jackpot of treats. We kept doing this until the dogs learned that down was the behavior that got the biggest reward on the mat. Once they'd learned that, we started playing the one-hour down game on the mat. Since Barley was already very familiar with that exercise, she caught on very quickly to the idea that the mat is a place you relax. I could put a mat down in agility class or next to the stove while I made pancakes and she'd stay on the mat until I released her.

When I got Rye, I knew she needed to understand mats, too. We started with the method we'd used in reactive dog class, combining the mat and the one-hour down game into one exercise. However, our obedience class used a slightly different method. We brought our mats to class and the trainer would have us sit a few feet away while she set a treat on the mat. When she gave the ok, we'd point at the treat and tell the dog to get it. Eventually, we added in the command "Go to your mat." Having the treat on the mat helped build the dog's drive for the mat. Then the dogs could do whatever they wanted on the mat as long as they stayed calm, but they earned treats for laying down. 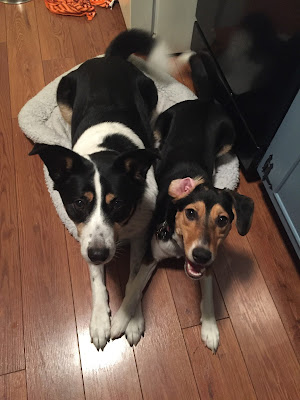 We use our mat for everything. My girls are experts at entertaining themselves if I am not entertaining them, so the mat helps prevent them from getting into trouble. Sometimes they spend just a few seconds on the mat before being released; for example, I often send them to their mat while I get food out of the oven and as soon as the door is closed again, they are released. Other times, they spend quite a while there while I do dishes or cook dinner and I periodically give them a treat--on those occasions, they usually just fall asleep. Rye goes to her mat while I fill her bowl (she even did this on her own with a door mat while we were on vacation recently!) and waits until I give her the ok to eat. All of the dogs in Rye's obedience class have mats to rest on between exercises. Often we do a little mat work before we go to bed just to get everyone to calm down a little bit.

Barley and Rye choose to share a mat. When we first started doing mat work together, I had two mats side by side, but the girls always ended up running to the same one and laying down. Barley has always left enough room on her mat for Soth since he has been her coach through all of her training struggles, so the transition to sharing with Rye didn't seem to bother her at all. Now, I don't worry about how many mats are out before I send them to one.


We've done many different things to train relaxation--whether it's in the house, on walks, or during play--but the mat has been the most important in our training and transfers to so many different situations.


We're happy to be joining our co-hosts Wag 'n Woof Pets and Tenacious Little Terrier for the Positive Pet Training Blog Hop.  This month, our theme is Calming and Impulse Control--How do you get your dog to settle down? But we welcome any positive training posts and you have until Sunday to join the hop! Be sure to check out all of the other creative ways people have taught their dogs to be calm.