Jumping into Summer with Pet Treater

Barley is used to being a professor's dog and she knows that for one week each semester she gets to have me home most of the day, but we spend all day sitting and grading papers with just the occasional stroll around the walk (seriously--my sister texted me to make sure I was still alive this week when she saw my FitBit numbers in our challenge). Rye, on the other hand, is still learning how finals week works. This was only her second finals week--and the first one was still during her separation from Barley, so she got lots of play time instead of grading time. 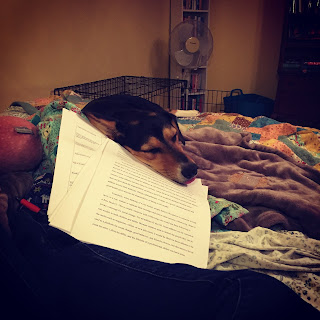 She settled into the routine pretty quickly, but she did not like it. In typical Pet Treater fashion, our box showed up just when we needed it most.


The girls couldn't wait to dive into the box. 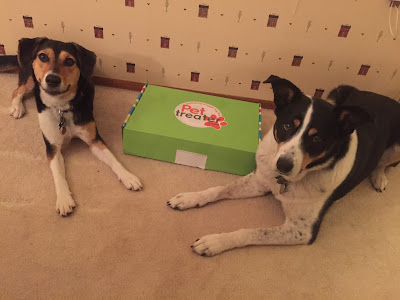 As usual, there were lots of goodies for all three of us in the box. 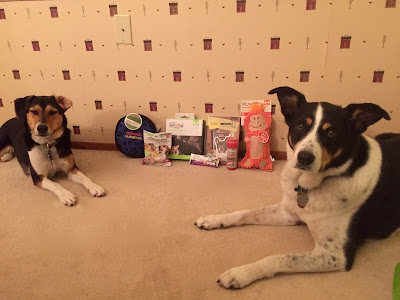 For the first time, most of our products came from two companies. We had three different treat items from Vegalicious. So far, we've only tried one of them: the Popped Snacks Lentil Blend, which were crunch little strips that look a bit like potato chips. Barley will eat pretty much anything, so she ate these but she wasn't as excited to dive into them as she is with peanut butter or meat treats. 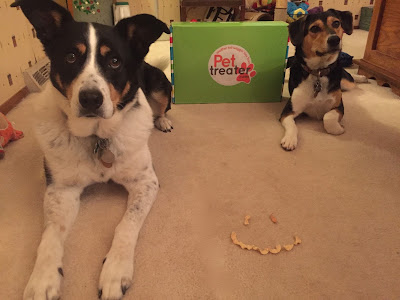 Rye ate them, too, but she was not impressed--in fact, when she jumped up and hit my treat pouch and spilled treats all over the road on our walk, she left the lentil snack in the road and ate all of the other snacks. They're healthy treats with only 3 calories per piece, but the girls definitely didn't see them as high value treats.

The other two Vegalicious treats products are a Healthy Food Enhancer food topper that comes in a container like a pepper grinder where you can grind veggie pellets on top of your dog's food and a Crazy Coconut treat bar. I'm sure the girls will love the coconut bar because they go nuts every time I put hand cream that has coconut oil in it on, but we're saving that for a day they need something new and different.

There was also a cute From: Frank journal for me that matches the notepad from last month. I always love a good journal and one with cute dog and cat pages is even better. 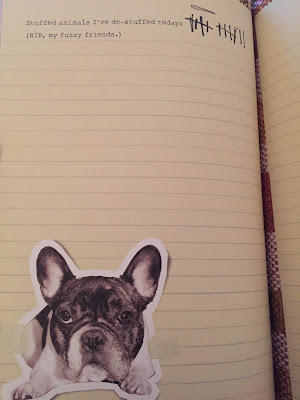 We got two Outward Hound products. One is a monkey bottle toy--and Rye loves to crunch bottles, so I put that away until a day when we really need a good distraction. The other is a car barrier to keep your dog from climbing into the front seat. Both my girls ride in their harnesses, and I like to reach back and pat them every now and then, so we won't use that, but it looks like a great product, so we'll pass it on to the shelter for them to use in one of their fund raisers.

The biggest hit, though, was a Chomper Gladiator toy, which Rye immediately claimed and has been inseparable from ever since. The tag claims it's the "toughest of the tough" with "3 layers of TUFF-ness." Rye always takes claims like that as a personal challenge. So far, the edges are a little frayed but the toy is hanging in there.

One of our favorite things about Pet Treater is that we get to try out new things like the Vegalicious treats. We've never seen those in the store before and since I'm always looking for low-cal treats for Barley, those were a great new thing to try out. Even though we probably wouldn't buy the lentil treats, it was nice to have a chance to try them out and find out they weren't Barley and Rye's favorite before we were stuck with several bags of them (since I always buy several bags when I stock up on treats).

If you want to try out Pet Treater for yourself, you can get a free pet bed (which is awesome!) in your first box for a limited time with code PT-Bed.

Disclaimer: We were given a Pet Treater box in exchange for our honest review. All opinions are our own.
Posted by Beth at 10:14 PM