Preparing for a Scent Trial, Part 2

Last week, I mentioned that Barley and I recently registered for our first C-WAGS scent trial. Since we're starting at Level 1, we will have to find one scent--either cypress or birch--hidden in one of 8-10 boxes.

It's been a long time since we've worked with boxes. When we started noseworks training, it was all boxes because our trainer was getting us ready for an Odor Recognition Test if we chose to compete in NACSW. Then we made courses in class more difficult by adding extra objects and stacking boxes. Before our classes ended, we moved to hiding scents outside of boxes and doing outdoor searches.


Since our classes ended, we have mostly done searches for scents outside of boxes. It's easy to take the scent kit with us if we're traveling--it's not as easy to bring multiple boxes. It's also a lot quicker at home to hide the scent vessel around the house or the yard than to set up a bunch of boxes. Barley seems to have more fun searching outside of boxes, too, so that's what we've been doing for the last few years.

When I set up our first search for the cypress scent, it was pretty clear that we need to really work on boxes over the next month. Barley immediately knew what to do, but she was not particularly speedy about it in our first attempt. It took her almost 3 minutes before she found the correct box--in the trial we'll only have 2 minutes and I'm sure she'll be distracted in a new environment, so we need to get much quicker. By her third search, she found the scent in 13 seconds, but we did about 6 searches and that was the only one where she was under a minute and 30 seconds. 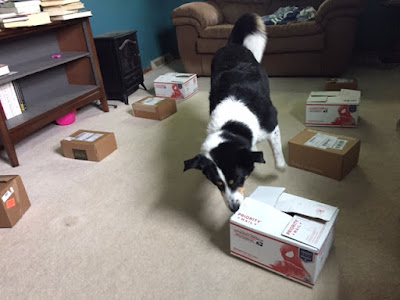 We also need to do some searches on leash. Usually, since we're working at home, we do off-leash searches. In class, Barley was always on leash, so we've done on-leash searches before, but it's been a long time. In C-WAGS, the dogs can search on or off leash, but I won't be able to make that decision until I see what the environment is like. I know that other competitors aren't able to watch the searches since that would give away where the scent is hidden, but if there's even a tiny chance that Barley could slip out of the ring and go out to where any other dogs were waiting, we'll be searching on leash. If the ring is secure and there's no way to see other dogs, we might consider searching off-leash. But we need to be prepared for both. 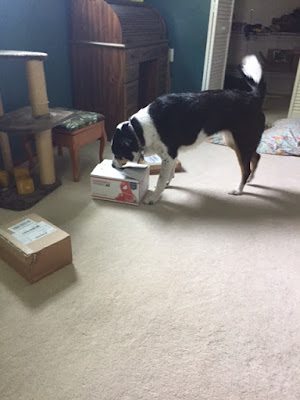 We also need to do some work where I don't know which box the odor is hidden in. That's harder to do since Soth and Rye can't set up courses for us. My parents are coming soon, though, so I'm hoping that they can help with that for the few days they're here. I'm also taking a road trip with my sister and both dogs soon, too, so if we can fit a couple tiny boxes in the car, she can help--and if we can't, she can still hide the odor out of boxes and give me a chance to focus on Barley's body language when she finds something. 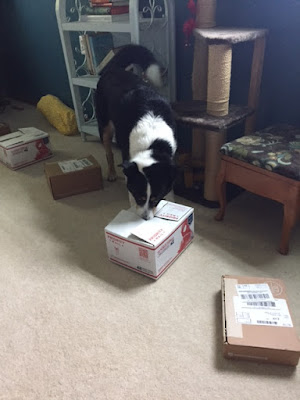 Thankfully, we are officially on summer vacation, so we'll be able to do several little practice sessions every day between now and the trial. It's still quite possible that the new environment will be too exciting for Barley to focus well enough to pass both rounds we're entered in, but my fingers are crossed. 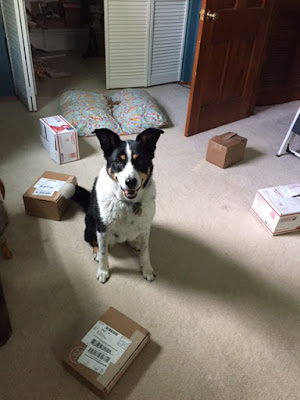 And no matter what happens, Barley's having fun doing it, so that's really all that matters.