If it were possible to capture summer in a box, Pet Treater would have done that with our June box. As usual, the girls were excited and couldn't wait to open our box. 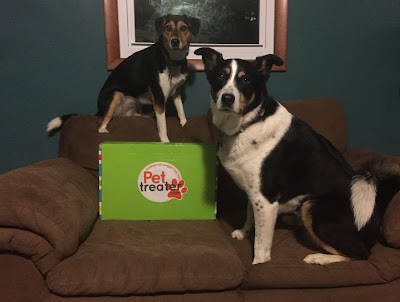 We couldn't believe all of the great stuff that Pet Treater sent us this month. This box was overflowing. 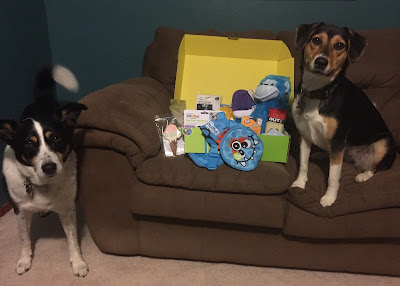 My favorite item in the box was a monkey by Grriggles. Pet Treater often includes Grriggles toys and they are always super cute. This monkey is no different. He has velcro hands, so you can hang him on things--like Rye. Rye loves to run around with really big toys and this monkey is almost as long a she is, so she couldn't wait to get her paws on him. 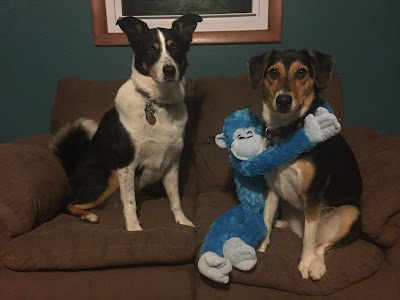 Rye's love for the monkey stopped there. After I took a picture of Rye with the monkey, I took him to clip the tag off and noticed a little patch shown onto his chest instructing me to squeeze there. I felt a sound box before I'd even squeezed and I knew I was going to love whatever sound this monkey made. When I squeezed it, I was not disappointed--he makes monkey noises! Rye, however, thought this monkey needed to be taken out.

Here's a little #sneakpeek of my favorite item in our June @pettreater box. Be sure to watch with sound to see how Rye feels about it--and stay tuned for our full review soon! #sponsored #ad #review #pettreater #pettreaterbox #monthlypetbox #dogs #borderbeagle #bark
A post shared by Beth (@eedevore) on Jun 20, 2017 at 8:04pm PDT


She growled, she ran away and then charged at him, she growled some more. We eventually went down to get the girls their dinner and left the monkey upstairs in the library. After we ate, Rye ran upstairs into the dark and started bouncing and barking at the monkey again. The monkey spent the rest of the night in the closet. Rye has made peace with the monkey and doesn't bark at him anymore, but she is not interested in going anywhere near him. Barley has embraced having one toy in the house that Rye won't destroy and he spends a lot of time in her crate.

In addition to the smiles the monkey brought, we got a bag of strawberry flavored Exclusively Dog Lickorish Chews. These smell a little like fruity medicine to me, so I try not to get them too close to my nose when I give them to the girls, but the girls really enjoy them. They're a little bigger than treats I usually give the girls and I haven't been able to break them in half, so the girls think that's a good thing, too. 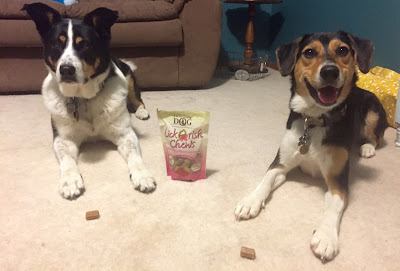 As usual, we got a seasonally themed cookie from Emmy's Treats. Summer wouldn't be summer without ice cream cones, so this treat was perfect for our summery box! 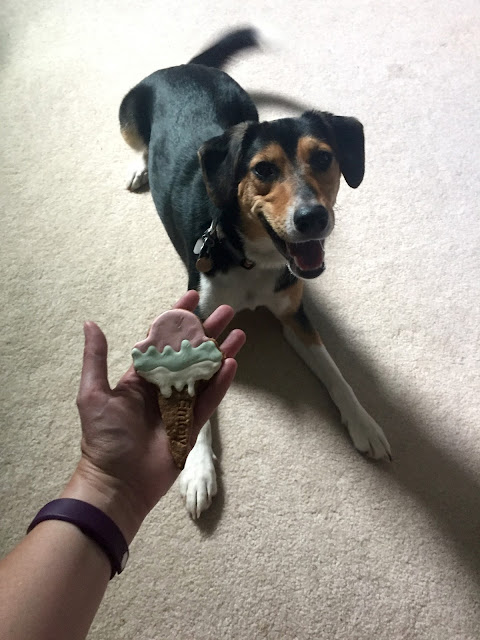 Pet Treater also prepared us for adventure with an Outward Hound backpack. Since our Pet Treater is filled for Barley-sized dogs, this backpack is way too big for Rye. Barley is way too dignified to wear a little monster pack--and she would probably plant her butt on the trail and refuse to move if I put it on her anyway--but I've wanted to get a little pack for Rye. I'm hoping that when we visit Rye's grandma, she might be able to help us take in the straps enough that it fits Rye because she looks so cute in this pack! 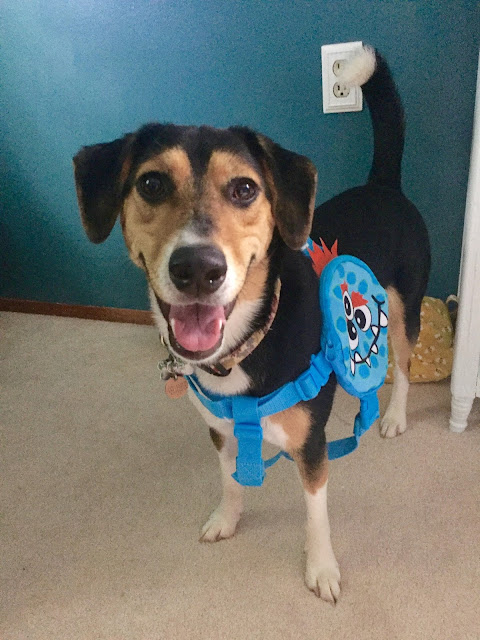 Pet Treater even prepared me for adventure with a wrist wallet that can hold money, ID, and a few other little things. I've already got some wacky tan lines from my FitBit, my Garmin GPS watch, and the leashes, so I won't be trying this out over the summer, but I think it will be perfect when it gets cool enough that I don't bring a backpack full of water, snacks, and other things to the arboretum with us.

And Pet Treater didn't stop there! We also got some Arm & Hammer finger toothbrushes that I should really try out on Rye soon. We got a lamb-flavored meal replacement bar from Out Bar that seems like one really big piece of kibble that was really hard to break up and not something that I really wanted to replace the girls full meal with, but the girls thought they chunks I broke off for them were tasty. Barley is waiting for Rye's next play date so she can have the Himalayan chew, which is something she has loved for a long time. We also got too more toys--a Smart Paw Honeycomb Big Bone and a FouFit popsicle toy. It took Rye about 3 seconds to get the toys I stuffed in the honeycomb bone out, but she has enjoyed chewing on it without treats, too, although she has gnawed off a few chunks despite the packaging advertising "super strong honeycomb construction" "for dogs that love to chew." The popsicle can float and it can be frozen after it's wet to make it a crunchy, icy toy. It's still in the 50s here this morning, so our popsicle will be in the freezer a little longer, but I'm curious to see what the girls think of a frozen toy when it warms up outside again. 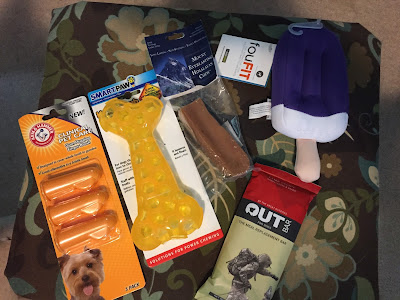 We're feeling extra spoiled and ready to tackle the rest of summer after diving into our June Pet Treater box. If you want to try Pet Treater, they have plans starting at $24.99 per month and you can use code PT-5OFF to get $5 off your first box.

Disclaimer: We were sent a Pet Treater box in exchange for our honest review. All opinions are our own and we were not compensated in any other way.
Posted by Beth at 9:25 AM