When Rye and I were in a Saturday morning obedience class, we went on an adventure every week after class unless it was cold and rainy. Rye is not very confident in nature unless Barley is with her--and even then, she's not very sure she likes it--but we did find one park in our post-obedience adventures that Rye loves. Now that we're in a late-night agility class, we haven't had any solo adventures in almost 2 months!

Rye and I have gone on some solo neighborhood walks, but we hadn't been anywhere fun since obedience class ended. For my mileage goal of 1000 miles for the year, only walks with Barley count so between rain and warmer weather, it can be hard to find the extra time to get Rye out by herself for a good adventure.

On Tuesday morning, I woke up and it was in the 50s (is it really July today?). When I checked the forecast, it wasn't supposed to get out of the 60s all day, so I decided it was the perfect day for Rye and I to adventure.

Rye was so happy as soon as we pulled into the parking lot at her park. 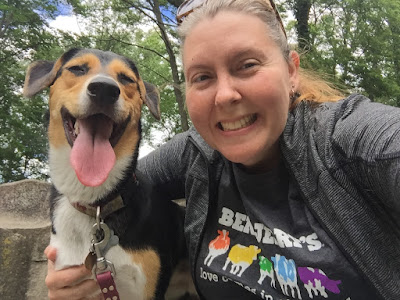 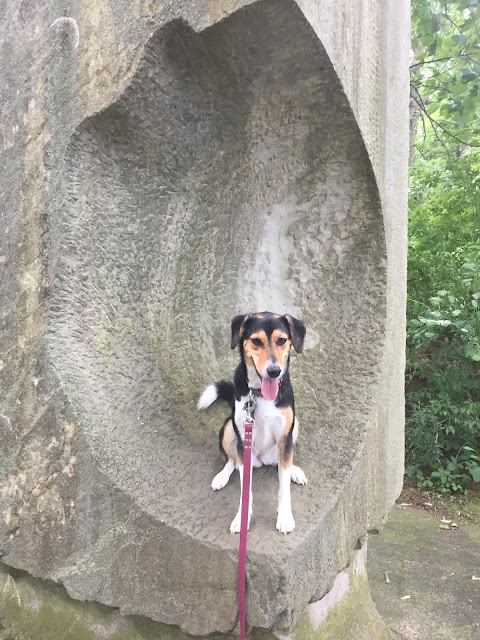 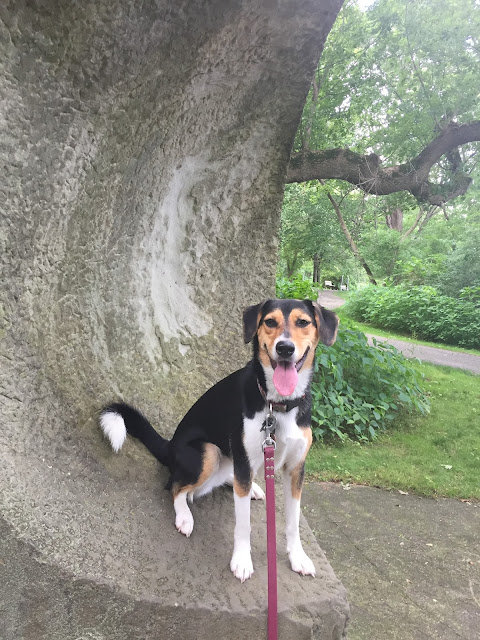 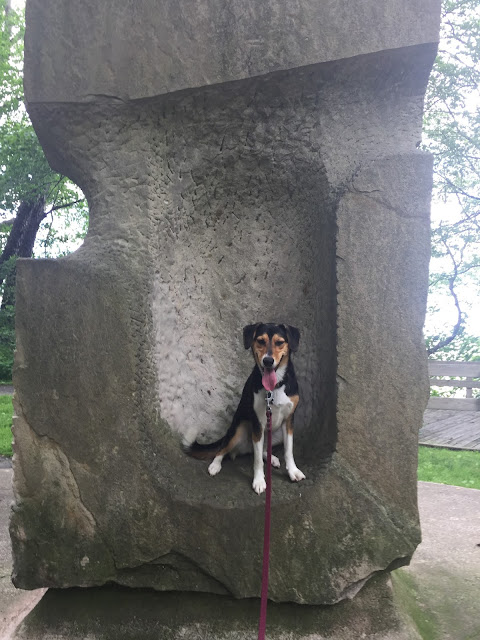 My original plan was to take Rye down to the beach to let her play a little bit. The lake is a lot higher than usual, so when we got to the stairs to the beach it was clear there wasn't much beach to play on. Since it was chilly, I was wearing jeans and spending the rest of the afternoon in wet jeans didn't sound like a good plan to me, so we settled for just watching the waves for a few minutes. 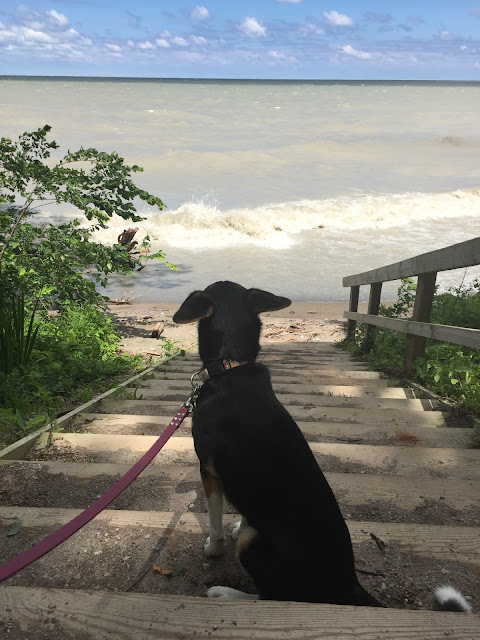 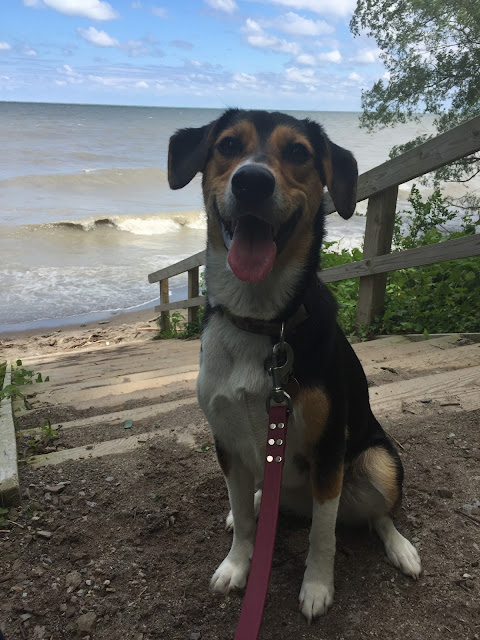 Barley and I used to visit this park a lot, but it wasn't until Rye and I went that we discovered a little nook with a cool curved bench and a little stream. It's green and shady and cool, so we took a little break there. 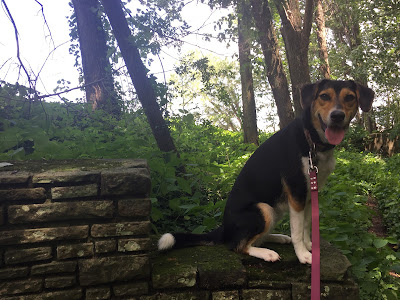 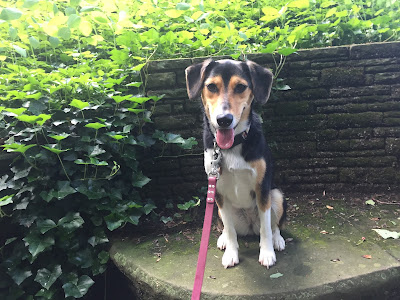 On our way back to the car, we even found a couple treasures and they were painted as dogs, so it was perfect! 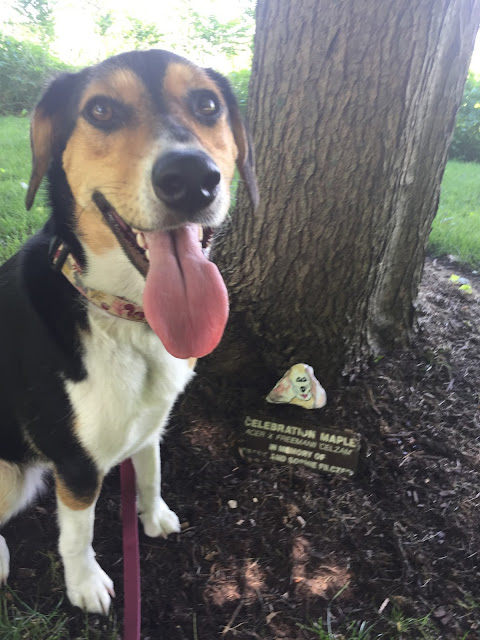 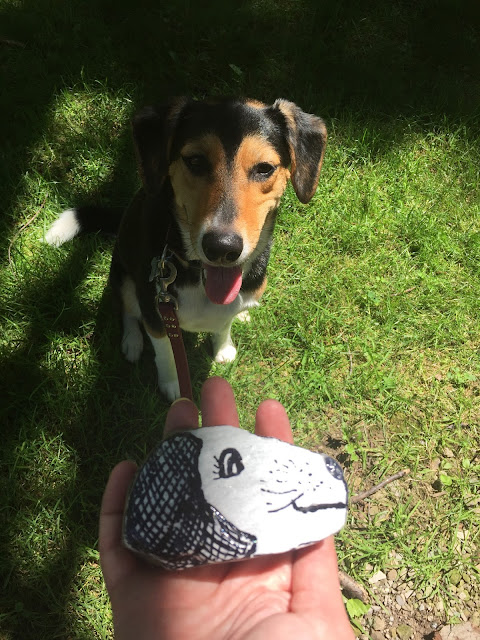 Our fun adventures didn't stop there. We stopped by a new pet store that opened in town where Rye got to pick out a new toy and a new toy for Barley and for Soth. They had a few kittens up for adoption and Rye wasn't sure what to make of them. I don't know if it was because she'd never seen a cat that small or if it was because they weren't her cat, but she couldn't decide if she should hide from them or growl at them. She settled for a combination of both.

We ended our adventure with a stop at Tractor Supply Company where Rye made a new friend. 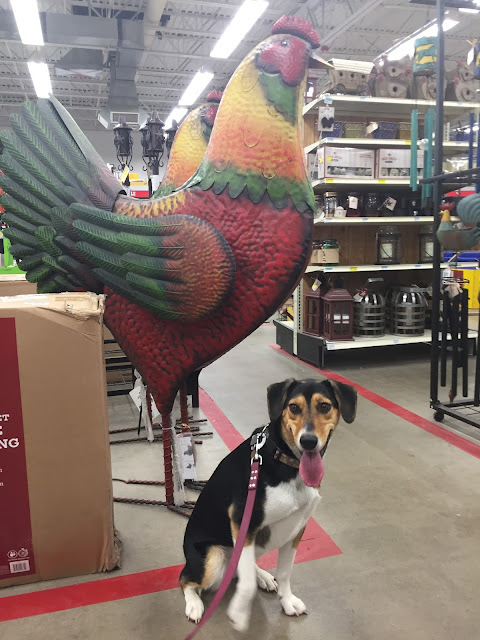 It was so fun to have a few hours of fun with my sweet potato Rye. She's really come a long way with  her obedience, focus, and confidence when she's out on her own and I'm so enjoying her company.