A Pet Treater Pick Me Up

Last week was a bad week. First, Soth had another bad episode of his FLUTD problems (more on that another day). Then Barley got attacked by a neighbor's dog (another story for another day) and a cat that got into our yard (so many stories, so little time). Thankfully, one evening, we opened our door and our Pet Treater box was sitting on the front porch.

Barley couldn't wait to tear into the box and see what was inside.


Pet Treater never disappoints and our box was filled with all kinds of good loot. 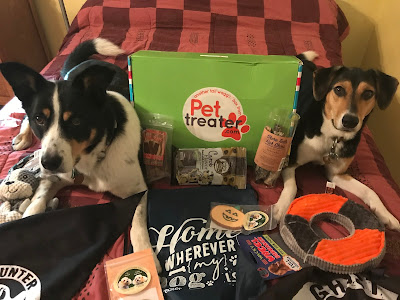 We got three different packages of treats: Loving Pets beef bars, Exclusively Dog Carob Flavor Sandwich Cremes, and Shore Tails Fish Skins. As always, we got some Emmy's Treats--including one shaped like a pumpkin, so Barley was very happy to see those! The beef bars are nice and soft, so they will be a perfect new snack to take to class this week to keep the girls focused on me. The sandwich cremes are like oreos for dogs--and I also just bought myself some limited addition Cookie Butter Oreos, so we'll see whose cookies last longest (my bet is on the dogs, since they have done a lot more self-control work than I have). The treats we're most excited about, though, are the fish skins. We've had them from other brands and the girls love them--these particular fish skins are rolled up, so they take a little bit longer for the dogs to eat. To make things even better, the package contained an even number of snacks, so I won't have to try to give one pup a fish skin in secret when there's only one left! 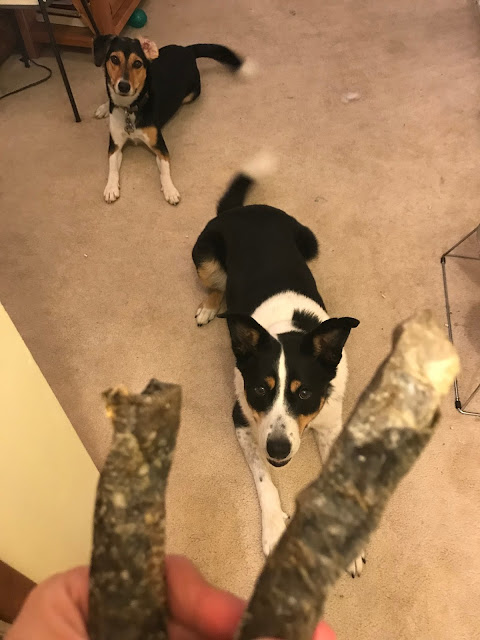 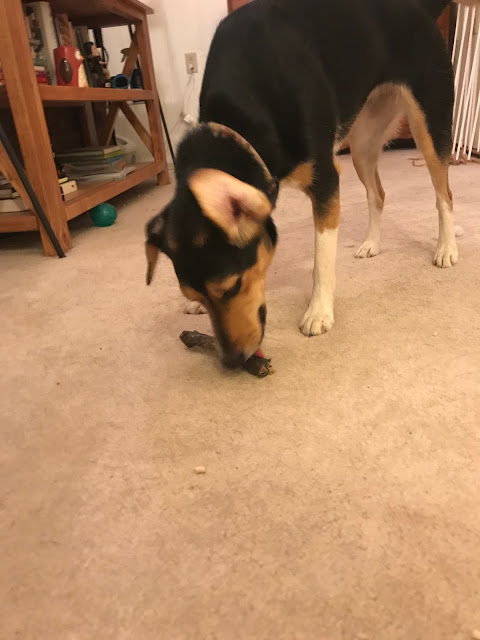 For my own special treat, I got a cute drawstring backpack that says Home is Wherever my Dog Is. I don't normally use that kind of backpack since we carry so much stuff everywhere we go and need a little more structure, but it will be a great addition to a raffle basket for the APL's next fundraiser.

We got two different toys: a stretchy puppy with two tug rings and a squeaker ring that's made up entirely of squeakers. Barley claimed the puppy right away--even though she's not into tugging--and Rye was more than happy with the squeaker ring. 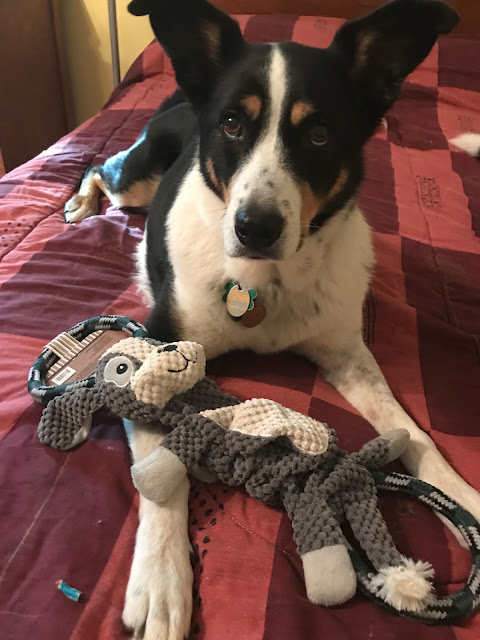 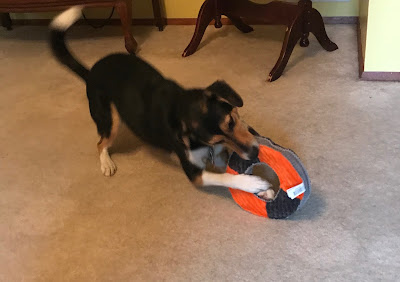 Then we got two mystery items. Y'all I don't know what these things are. They're made out of similar material to the bandanas we've gotten in past boxes, but they're full squares instead of the usual triangles and the one with the big logo can't be ties in a way that the image shows. 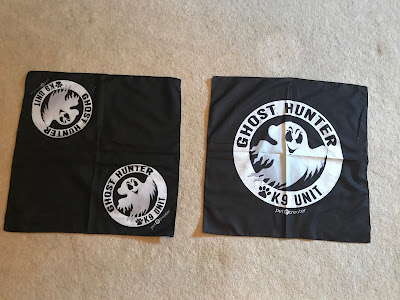 I folded the one in half and put it on Rye as a bandana, but it's far too big for that. She looked adorable, but it was basically a dress on her! She didn't attempt to walk away during our photoshoot, but it was long enough I think it might have impeded her movement. 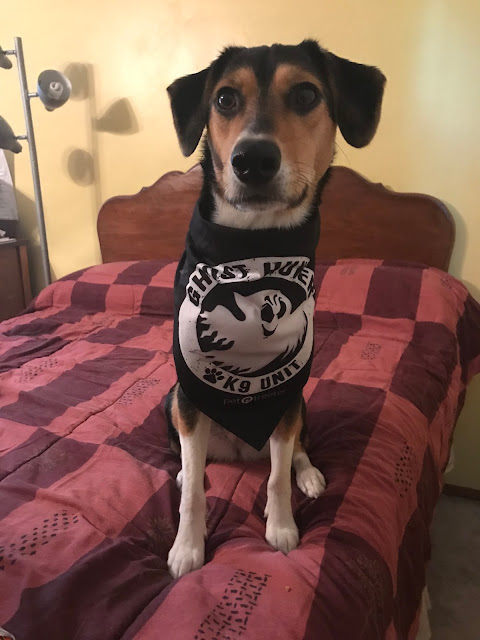 I've wracked my brain and I just don't know what these things might be. Luckily for me, I was teaching Nathaniel Hawthorne's "The Minister's Black Veil" this week and decided to come to class in a black "veil" and folding the one so the ghosts didn't show made this the perfect face covering!

As usual, Pet Treater made us all very happy! Halloween is one of my favorite holidays, so all of the seasonal goodies made this box extra fun to open and in true Halloween fashion, we even got a little bit of mystery (but seriously, if anyone knows what these things are supposed to be, let me know!). For a limited time, you can get 20% off your first box with code PT-20.

Disclaimer: We were given a Pet Treater box in exchange for our honest review.