This week, my Facebook memories reminded me that two years ago I'd shared a video about a cheetah who'd been hand raised after it wasn't thriving with its mother in the zoo and the caretakers got it a lab puppy to be a friend and help it be confident. The two little critters romped and played and snuggled together. Little did I know that a little over a year after sharing that video, I'd have a similar friendship in my own house.

When I decided to get Rye, I didn't worry too much about Soth. Soth has made it clear that he rules the house. He's not afraid of Barley. He's not afraid of my parents' dog, my sister's dog, or my brother's dog and doesn't hesitate to put them in their places if they upset him. Foster Pup Sal was terrified of Soth--sometimes even refusing to come back inside if Soth was sitting in the doorway.

There was a cat in the kennel right next to Rye with only a few inches between them at the shelter and Rye paid no attention to him, so I wasn't worried about her being aggressive towards Soth. I just didn't think about Soth much at all in the decision. Most of my thoughts were on Barley and whether she'd let me keep Rye. That journey was stressful and fantastic and heartwarming.

What's happened with Rye and Soth, though, has been beautiful. 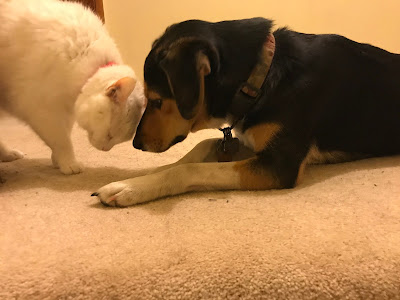 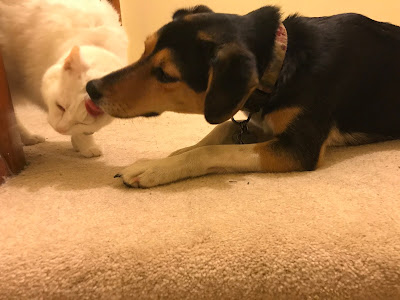 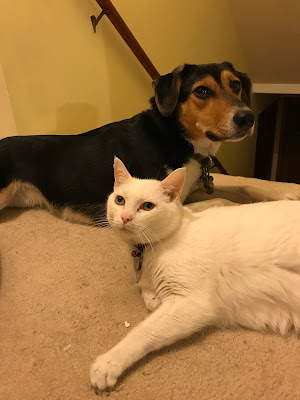 Almost every night, they go up to bed before I am ready to go up and they wait at the top of the stairs for me. Usually, as I climb the stairs, Soth rubs against Rye or sniffs her toes. Then I get out the camera because they're so ridiculously cute that I can hardly stand it. 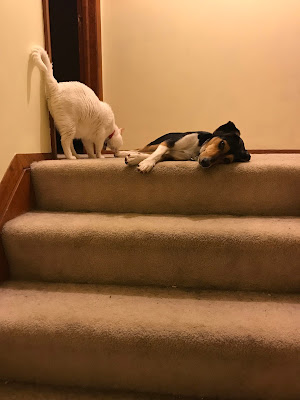 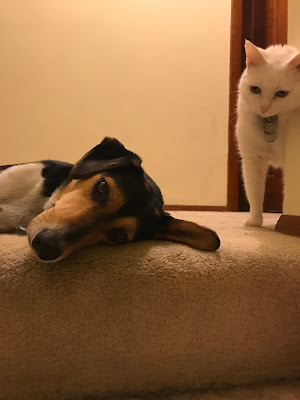 Eventually, they both flop down and give me that "I can't believe you're taking pictures" look until I decide I've gotten enough and we all go up to bed. 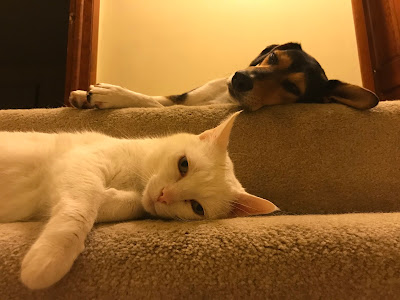 Soth was Rye's first friend since she wasn't loose with Barley for almost two months when I brought her home. They have played together--chasing each other up and down the stairs, play swatting each other, stealing each other's toys--since day one. They watch squirrels and birds together from the back storm door. But my very favorite moments are these peaceful ones at the end of the day when I can see just how comfortable they really are with each other.