The Battle of the Boots

Over the holidays, the pets and I spent two weeks in Alabama. Most of the time, we had temperatures above freezing--with a couple days in the 60s!!--and we were thrilled with the walking weather we had. While we were gone, the snow at our house started on Christmas and just kept going. We didn't get quite as much snow as nearby Erie, but I think the totals were close to 30 inches in about 48 hours with a little more here and there throughout the rest of the week. Alabama helped us ease into our return to the tundra with temperatures in the teens for our last two days, but with no snow on the ground, we still bundled up and walked.

When we got home, snow was everywhere. Signs for businesses were hidden behind the piles created by plows. The sidewalks were completely inaccessible. The roads were skinnier than usual with nowhere else for the snow to go. Temperatures haven't gotten above 15 degrees since we got home, so that situation hasn't changed and it's almost impossible to get in a walk without having to walk on a pretty busy street. Rye isn't as good with traffic as Barley is, so basically we've been snowed in for days.

The first morning I sent the girls out into the yard and Barley was ready to come in as soon as she was finished with her business. As soon as she came in, she stopped on the doormat and held up her paws one at a time for me to warm them in my hands. Rye wanted to romp and play and zoomed around the yard until suddenly she sat down and couldn't move. I had to pick her up and carry her inside. It took less than 4 minutes for the cold to cripple my puppy. 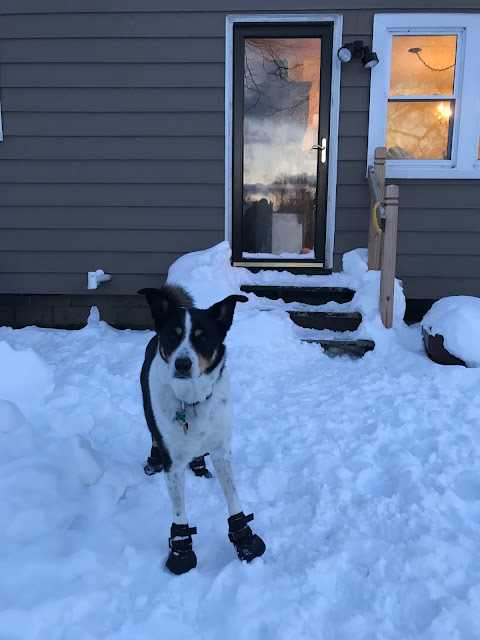 Barley hates her boots. She has two different styles--her Pawz boots and some Ultra Paws boots--and she hates them both. The Pawz boots are easier to get on her because they don't need any adjustments. Of course, we'd used them a few times before our holiday travels and Barley had gotten spooked by them and refused to even walk by them, so I'd hidden them somewhere and couldn't find them, which meant we had to go with the more difficult Ultra Paws boots that have two Velcro straps on each boot.

My too smart for her own good Barley mastered Velcro this week. I'd wrestle her into her boots and after trying to stand on her tippy toes like a ballerina, I'd get her out the door.


She'd waddle around the yard a bit, and then she'd go stand in front of the door. It wasn't long before I noticed she was loosening the Velcro on her boots. 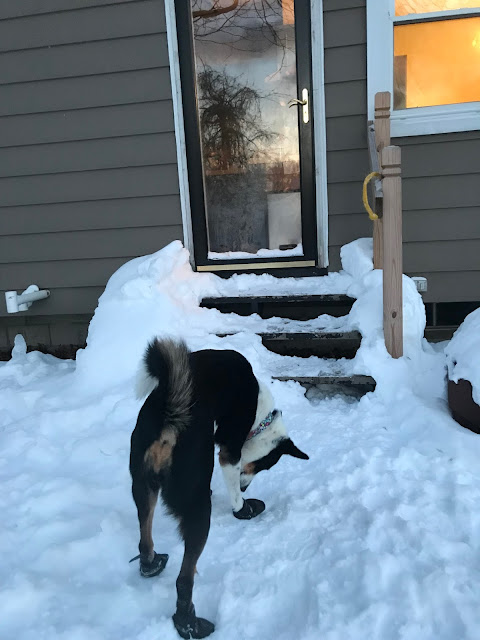 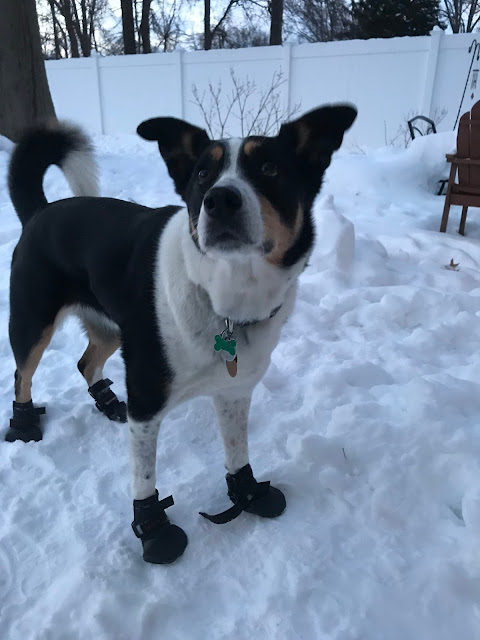 Then she'd take off after a squirrel and the boots would fly. I've spent a lot of time tracking down her boots in the deep snow along the fence this week.


After a few minutes without boots on, she'd be back by the door begging to go inside.

Rye is slightly less dramatic about her boots. She's not a fan of having her feet touched, but if I corral her in the kitchen so she can't get away, she'll hold still long enough that I can slip the Pawz boots on her. She will sometimes hold her feet up off the ground like she's forgotten how to stand, but as soon as she's outside, she's back to her usual busy self. 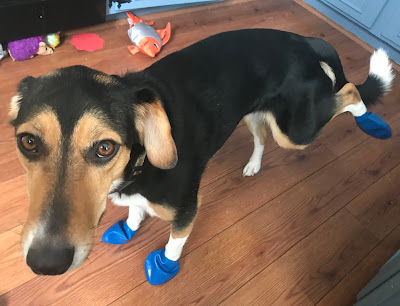 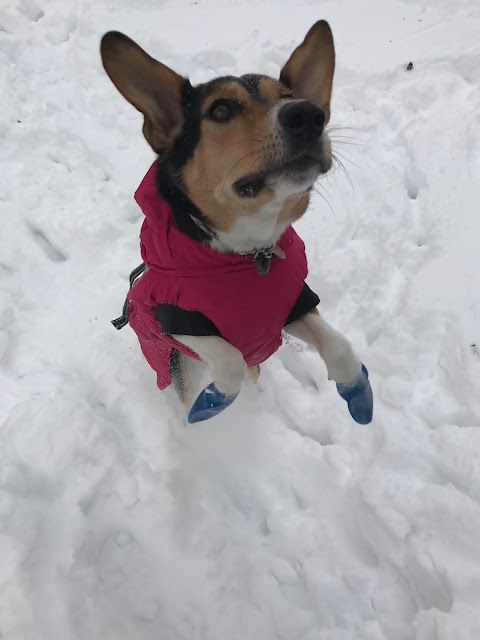 Every year, I tell myself that we'll spend the summer working on learning to love the boots. Then winter goes away and we need a break from thinking about cold and I tell myself we'll start after we've thawed out. Then somehow there's snow on the ground and the battle of the boots starts all over. 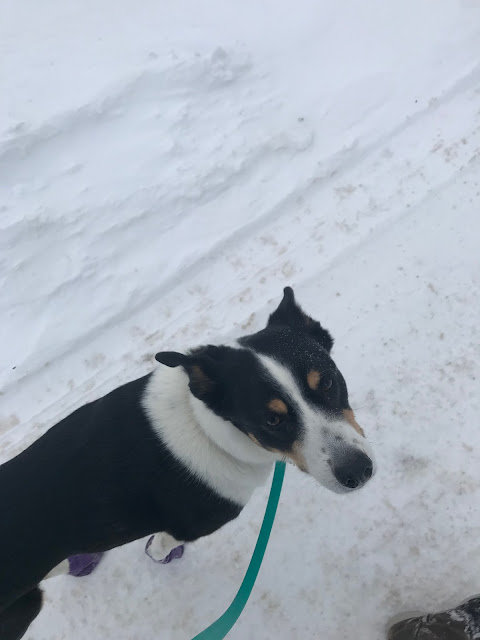 Thankfully, after days of tearing apart the house looking for Barley's Pawz boots, I found them--just in time for the temperatures to warm up enough to put the boots away again!
Posted by Beth at 12:00 AM