Nights One and Two of Our First C-WAGS Scent League

Since Rye and I have been spending so much time at agility trials, I've been trying to find ways to get Barley a little more solo time. When I saw that our friend's training center was offering a C-WAGS scent league, I knew that we had to sign up. A scent league is similar to a bowling league. It lasts for a set amount of time--ours is 6 weeks--and each week the same dogs show up and complete one search each. Since Barley had earned her Level 1 title last year, this was a good opportunity to try out Level 2 for the first time.

There were two choices for the league: Sunday mornings or Monday nights. Since I had plans to visit my sister and go see Reba McEntire on the first Sunday and Rye was already registered for some Sunday agility trials, we chose the Monday night league. We were leaving my sister's house in Virginia the morning of the first night, but we were all set to get home with plenty of time to unpack the car and stretch our legs before heading to the league.

Unfortunately, the universe had other plans.

About halfway through our trip, the a/c quit working. I wasn't too concerned about it. The temperatures were close to 100 the whole time we were in Virginia and that day was in the 90s--my little Ohio car has not had to deal with that kind of heat often, and I figured she was just tired. We rolled down the windows and I made a mental note to call and make an appointment to get that fixed on Monday.

Then about an hour and a half from home, we went through a toll plaza and my car stalled. I thought maybe I'd just let the clutch up too early, which surprised me because I didn't think I'd done that, but I turned the car back on and she came back to life. But another mile or so down the road, she kept getting slower and slower and the engine temperature, which had been fine, had suddenly skyrocketed. I had to pull over.

After waiting for an hour for AAA's tow truck to arrive, we got towed to Firestone. I was panicking the whole time because the dogs had to stay in the car for the short tow. The windows were partially down, but we'd already been hot from sitting on the side of the road with no a/c for an hour. Even if the dogs had been allowed in the tow truck, though, there was no way Rye was going to ride that close to the tow truck driver. She was doing her best to make sure he didn't get anywhere near the car while he was hooking it up. 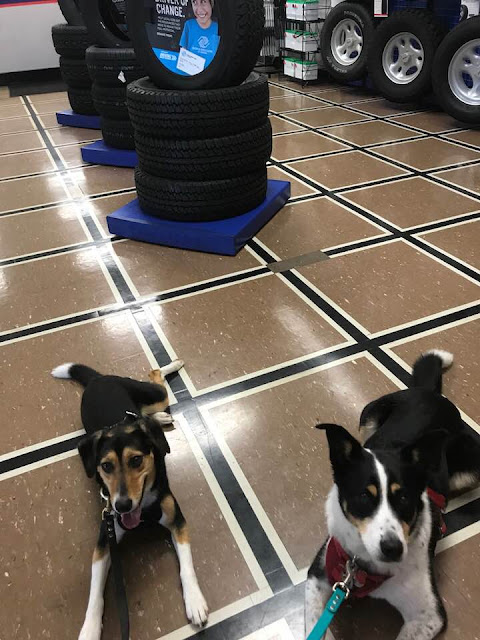 The adventure continued with the Firestone crew saying they couldn't have my car ready that day, but they called to book a rental car for me. We quickly realized, though, that the rental company probably wasn't going to be very excited about the dogs hopping in their transport van or a rental car, so I had to trust my gut and leave the dogs in the Firestone office while I went to get a car. Despite Rye's meltdown over the tow driver, both dogs were quickly enamored with the whole shop, so I just held my breath the whole ride to the rental and booked it back to Firestone as quickly as possible.

Instead of dropping Rye off at home, we had to go straight to the scent league. Luckily, we made it there right as they finished the Level 1 searches, so we had plenty of time to check in, go to the Level 2 briefing, and then we were the second dog up in Level 2. Barley was so excited to be out of the car that she sniffed every single container and object thoroughly. Her alert is so subtle that I couldn't tell which ones actually held the odor, so I called two false alerts. In C-WAGS, you can have one fault, so we failed.

Week 2 was much better, though! We practiced more throughout the week and we had a completely uneventful day leading up to the scent league. Barley found the first odor really quickly. Then I had another false alert, but we quickly found the second odor after that and got our first leg of Level 2. 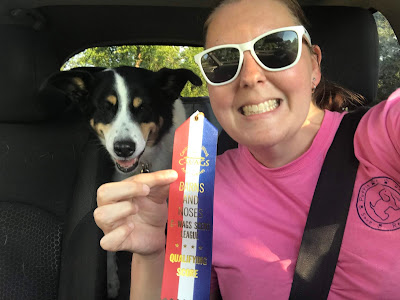 In C-WAGS, you have to have 4 qualifying scores to move up to the next level, so we're 1/4 of the way to Level 3 now!

Barley was so proud of herself and we both loved having a little one-on-one time. We decided to extend that happiness a little longer with a short walk at the arboretum to celebrate. 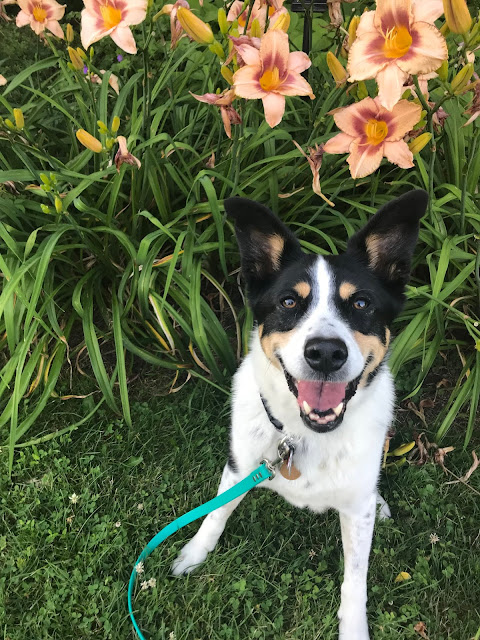 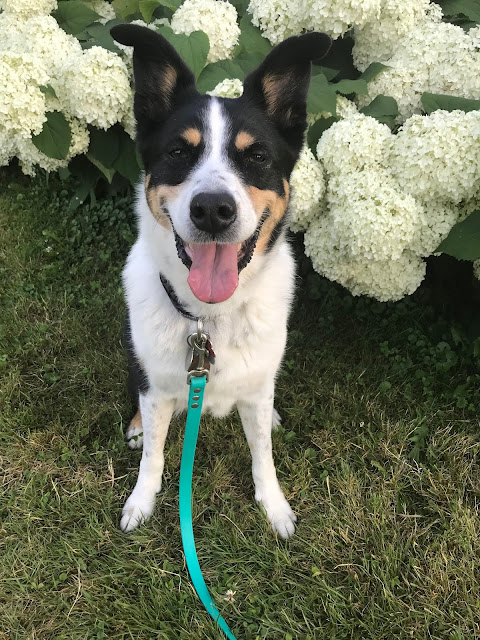