It's been a while.

In March, our schedule got crazy. By April, we'd reached the point where almost every waking minute was scheduled and on the one weekend we didn't have any plans, the thought of trying to update the blog was overwhelming. But now, we're enjoying glorious summer vacation and it's time to get back in the swing of things.

One of the things that made March so hectic was taking a therapy dog class with Barley.

Back in 2012 when my sister was the only reader for this blog, Barley and I took the Therapy Dog International (TDI) test twice. We failed twice. The first time, we failed because the test was outdoors and the grass was wet and Barley refused to down on command. The second time, Barley was especially wound up and couldn't watch someone jog past without reacting. After that, we gave up on our therapy dog goals. Barley started getting worse about being separated from me, so I knew we'd struggle with the supervised separation part of the TDI test.

Eventually, I learned that there were other certification groups that didn't require supervised separation on the test--because, after all, you're not supposed to hand your dog off to anyone during visits anyway. When we saw that a training club that hosts many of our agility trials was offering a 4-week therapy dog class ending with the Bright and Beautiful Therapy Dog test, I knew it was the right time for us to try again.

Except it wasn't. The class took place at 8 p.m. on Tuesday nights at a place about an hour and 15 minutes from our house. And March is the month I have a huge event on campus and the majority of the work takes place in the first three weeks of the month. But I didn't know when, or if, the class would be offered again and most semesters I teach a class on Tuesday nights, so it felt like it was now or never.

The first week, we met our 5 other classmates and two instructors. Dogs all had to have their Canine Good Citizen certificate to join the class, so we spent the first week reviewing those skills and learning about the additional requirements for therapy dog certification. In the next two weeks, we worked on introducing dogs to wheel chairs, walkers, canes, and crutches. We worked on leaving food on the floor. We worked on walking through a crowd. In the fourth week, we took our test. 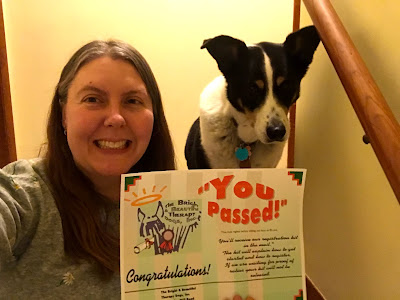 Even though Barley had nailed all of the practice skills the first three weeks, I was still nervous about the test. This is something I'd wanted to do for so long and the thought of failing again was awful! Luckily, Barley did well! She thought about taking a little nibble of the food on the floor, but then remembered that she was supposed to listen to me and we passed.

A couple weeks later, our badge, tag, and leash arrived. 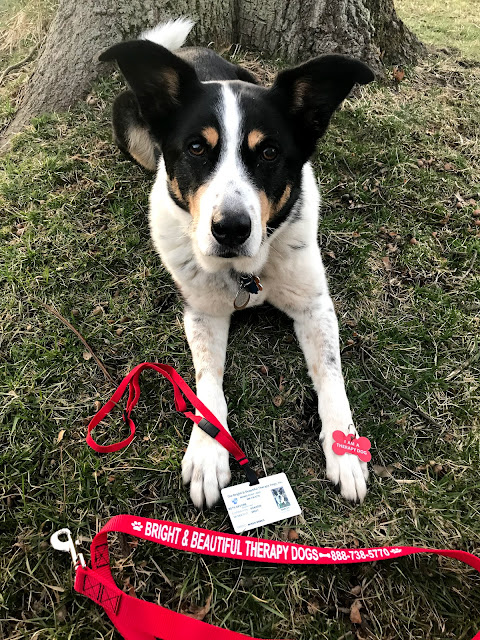 So far, we've done two visits. The first visit was in a community where they specialize in memory loss. It was such a positive first visit! It was filled with laughter and love. They had several residents out on "Main Street" where there were tables and benches set up and Barley just went from one group to the next and back again. We also visited individual rooms. One man ran out of his room, didn't say anything, but threw his arms around Barley and just laughed and laughed. We also stopped into the physical therapy room and Barley met several new friends; on our way out of the room, she noticed herself in the mirror and her ears perked up and she started wagging, so we all got a good laugh at that, too. We spent about 45 minutes visiting with residents and Barley thought it was wonderful being pet and told she was beautiful the whole time.

Our second visit was at a assisted living and rehabilitation center. We started in the physical therapy room and everyone loved taking a quick break from their exercises to meet Barley. Then we went from room to room visiting residents. We spent about an hour and fifteen minutes making the rounds, and Barley was definitely tired by the time we left. Visiting individual rooms seems to be harder for Barley than visiting people in rooms like the physical therapy room or other gathering spaces. There are so many extra smells in individual rooms and it was hard for her to decide where to focus her attention. In some rooms, she immediately connected with the person we were visiting, but in others, she was really into sniffing. I'm hoping that with more visits, she's more focused on interacting with more people. We'll be visiting the memory community twice a month and the other community once a month, so there will be plenty of opportunity to grow.
Posted by Beth at 9:53 AM